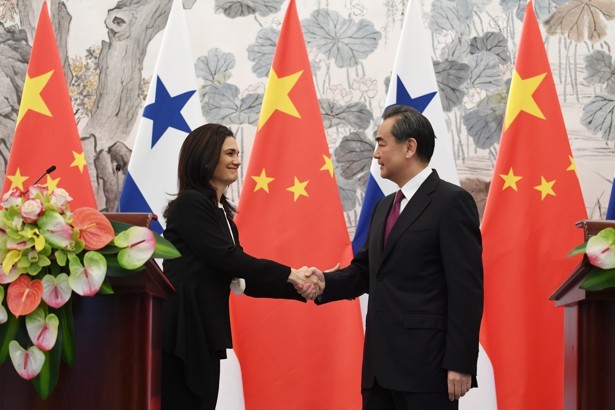 Panama has cut its diplomatic relations with Taiwan to establish ties with Beijing in recognition of the “one China” principle. At The New York Times, Chris Horton and Steven Lee Myers report on Panama’s decision, reactions from Taipei and Beijing, and the doubt that hangs over the continuation of diplomatic relations with Taiwan’s few remaining allies:

Only 19 countries and the Vatican now recognize Taiwan, which is officially known as the Republic of China. Several of those countries are in Central America, including Guatemala, Honduras and Nicaragua, and the decision by Panama, announced on Monday, appeared to put those relationships in doubt.

[…] China refuses to have diplomatic ties with countries that officially recognize Taiwan, which Beijing considers part of its territory and has threatened to annex by force, if necessary. Since 1945, Taiwan has been ruled by the Republic of China government, which lost the Chinese civil war and fled the mainland in 1949.

Taiwan’s Ministry of Foreign Affairs expressed “indignation and regret” at Panama’s decision. It said that in addition to withdrawing its diplomatic mission, it would cease all bilateral cooperation and aid.

Panama’s switching of diplomatic allegiance comes as cross-strait tensions remain high after landslide electoral victories for Taiwan’s Democratic Progressive Party in January 2016, and after the small African island nation of São Tomé and Principe switched diplomatic allegiance from Taipei to Beijing last December, prompting Burkina Faso and Swaziland, Taiwan’s last remaining African allies, to pledge to stick by Taipei. (São Tomé and Principe had reportedly asked Taipei for $100 million prior to severing ties.) Taiwanese President Tsai Ing-wen has refused to fully recognize the “1992 Consensus” and related “one China” principle, resulting in Beijing’s suspension of informal diplomatic channels with Taiwan, and its lobbying for the exclusion of Taipei at international policy events such as a recent conflict diamond meeting in Australia, and this year’s World Health Assembly in Geneva where Taiwan had previously been allowed observer status with Beijing’s blessing. Following a top court’s recent ruling that paved the way for Taiwan to become the first Asian country to legalize same-sex unions, Chinese censorship authorities demanded that all media “make sure not to present Taiwan as a different political entity than the Chinese mainland.”

The Washington Post’s Simon Denyer has more on the indignant and regretful reaction from Taipei, and President Tsai Ing-wen’s highlighting of the fact that Taiwan is a sovereign nation unwilling to play Beijing’s diplomatic bidding game. Denyer also surveyed independent experts on the damage that Beijing’s pressure is doing to cross-strait relations:

Tsai addressed the Taiwanese people on Tuesday afternoon vowing that Taipei would not engage in a “diplomatic bidding war,” nor succumb to Beijing’s threats

“We are a sovereign country. This sovereignty cannot be challenged or traded,” she said, insisting that her people want peace but that Beijing was pushing relations toward confrontation.

[…] “Coercion and threats will not bring the two sides together. Instead they will drive our two peoples apart,” she said. “On behalf of the 23 million people of Taiwan, I declare that we will never surrender to such intimidation.”

Denyer continued to note that close to three-fourths of those questioned in a recent poll by Taipei reject Beijing’s insistence on adherence to the one-China policy as a prerequisite for political ties.

State-run Xinhua News Agency reports further on the celebratory public reactions from China and Panama’s foreign ministers while signing a communique in Beijing:

Announcing the decision in the nationally televised address, Panamanian President Juan Carlos Varela said he is convinced that this is “the correct path” for his country.

Indeed, it is the right path for the Central American country to recognize the one-China policy and found its way to the mainstream international community.

[…] Undoubtedly, the establishment of full diplomatic relations between China and Panama reflects the increasing national strength and rising international status of the Asian country.

[…] All in all, Panama’s choice of severing ties with Taiwan and adopting the one-China policy is a wise and welcome, which is expected to bring about great benefits to both countries. [Source]

According to La Estrella de Panama, in recent years China has become one of the three largest users of the Panama Canal. In May 2016 Landbridge Group (China) purchased Margarita Island Port, Panama’s largest port. As part of the US$900 million deal to control Panama’s Margarita Island Port, Chinese interests have vowed heavy investments to upgrade port facilities and build a deepwater port capable of docking larger ships. Landbridge is also the firm that acquired the Port of Darwin in Australia’s Northern Territory.

Panama has also been positioning itself as the main hub from which to transport Chinese goods to Latin America.

During a meeting with a Chinese business delegation in late 2016, Panama’s Vice Minister for Foreign Trade Nestor Gonzales said his government was seeking closer ties with China. Various trade agreements were signed at the time. […] [Source]

More from Krishnadev Calamur on Beijing’s recent investment in Panama and diplomatic isolation of Taiwan:

Panama’s reversal may be linked to China’s massive investment in the country; Beijing has spent billions of dollars in the area around the Panama Canal.

Relations between China and Taiwan were fraught until the 1980s when Taiwanese businesses began pouring money into the mainland. In the years since then, as China has become a global economic power, it too has invested heavily across the Taiwan Strait. But China maintains that Taiwan, a democratic territory, is a renegade province and Beijing’s ultimate stated goal remains reunification. To this end, it has been angered by Tsai Ing-wen, Taiwan’s president, whom it views as more independence-minded. Indeed economic relations have suffered since Tsai’s election in May 2016.

Panama’s decision Tuesday is a diplomatic coup for Beijing. China, which maintained a pragmatic foreign policy, had invested in Panama—and other places that recognize Taiwan—for years. But Panama’s reversal could add more pressure on Taiwan’s leadership over its increasing diplomatic isolation.  [Source]

“While highly symbolic and a genuine hit, the Panama break will unlikely make a huge difference,” said Jonathan Sullivan, director of the University of Nottingham’s China Policy Institute, who’s currently conducting research in Taiwan. “It may bring pressure to bear on Tsai’s China policy. Certainly, that is Beijing’s short-term motivation for going after Taiwan’s allies.”

[…] The moves show the Communist Party’s balancing act with Taiwan, which it considers a province to be reunited with the mainland. While China’s leaders might want to force a change in Taipei, they don’t want to further alienate Taiwan’s 23.5 million residents, who swept Tsai’s pro-independence Democratic Progressive Party into power by a hefty margin.

[…] “The Panama incident is unlikely to produce immediate impact on Taiwan’s stock market or economy,” said Liu Tsung-sheng, president of Yuanta Securities Investment Trust Co., the island’s biggest fund with about $12 billion assets under management. “In the longer term, however, Tsai’s administration needs to assess any chain reaction to foreign allies.”

[…] Beijing hopes that the diplomatic isolation will eat away at Tsai’s political support and push voters back to the opposition Kuomintang, which favors better relations with China. Tsai’s approval rating fell to 39.4 percent in May, down from almost 70 percent a year ago, according to the Taiwan Public Opinion Foundation. [Source]