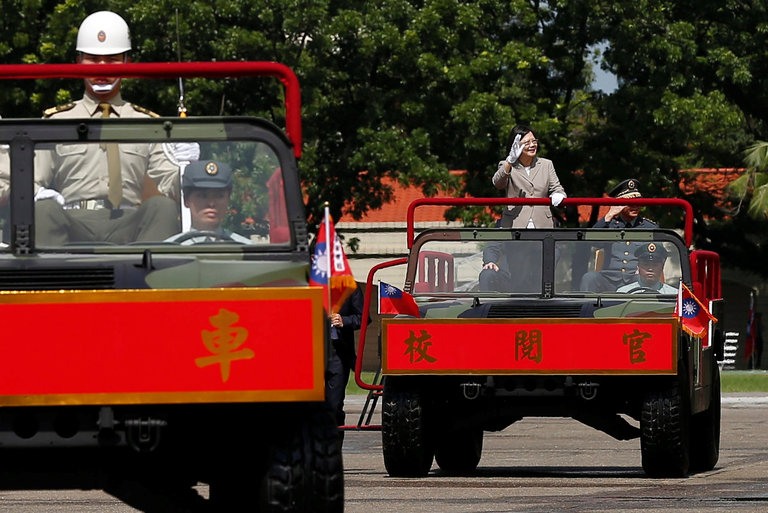 The Chinese government announced over the weekend that it has suspended all diplomatic communications with Taiwan over President Tsai Ing-wen’s refusal to fully recognize the “1992 Consensus” and its “one China” principle. Tsai, who heads the pro-independence Democratic Progressive Party, acknowledged the 1992 talks in her inaugural address last month and pledged to maintain the status quo with Beijing, but fell short of openly affirming that Taiwan and China are parts of the same country. Beijing’s announcement is the latest show of mounting cross-strait tension in the wake of Tsai’s landslide election victory in January, which triggered warnings from Beijing that any ensuing regional conflict would be blamed on Taiwan and its new government. The New York Times’ Javier C. Hernandez reports:

“The cross-strait communication mechanism has been suspended because Taiwan did not recognize the 1992 Consensus, the political basis for the One China principle,” An Fengshan, a spokesman for Beijing’s Taiwan Affairs Office, said in a statement posted on its website.

Taiwanese officials said Saturday that they would continue to try to communicate with their mainland counterparts. “We hope Taiwan and the mainland can continue to have benign interaction, which is good for both sides,” said Tung Chen-yuan, a government spokesman in Taipei.

Patrick M. Cronin, a senior adviser at the Center for a New American Security, called the decision by Beijing to halt talks a “warning shot across the bow.” He said mainland officials were growing increasingly nervous about an independence movement in Taiwan and were seeking to hinder Ms. Tsai’s domestic agenda, including her promise to revive a slowing economy.

“China will deny carrots and signal red lines for President Tsai as she grapples with her fundamental challenge, which is righting the economy,” Dr. Cronin said. [Source]

China’s decision to cut bilateral communication comes days after twenty-five Taiwanese citizens were extradited to mainland China from Cambodia on suspicion of internet fraud. This is the third instance this year where a foreign government has chosen to deport Taiwanese suspects to China instead of Taiwan. In April, Chinese authorities successfully convinced Malaysia and Kenya to deport Taiwanese telephone fraud suspects to China, where they were prosecuted and forced to confess on state TV. The University of Nottingham’s Jonathan Sullivan writes that the particular timing of China’s decision signifies Beijing’s intention to undermine Taiwan’s ability to manage cross-strait relations, rather than severing those relations altogether.

I would not go so far to say that Beijing has hereby declared a refusal to work with Taiwan under a DPP government, but it shows what Beijing’s tactic is going to be: A gradual turning of the screw, making it more difficult for Taiwan to manage the complex interactions between the two sides and perform its obligations of state. In recent days and months this has been exemplified by suspected Taiwanese criminals being deported to China from Kenya and most recently Cambodia, when the representations of the Taiwanese Ministry of Foreign Affairs were simply ignored.

The timing of the decision is not accidental, coming during Tsai Ing-wen’s first overseas trip as President. While her visit to Central American allies is not out of the ordinary, she has been granted stopovers in the US on both outward and return journeys. And having previously made a good impression in the US, she has been granted a warm (though not ostentatious) welcome. It is typical of tit-for-tat Chinese tactics that a (moderate) opportunity for Tsai to appear on the international stage as a stateswoman would be accompanied by some kind of sanction.

This is not about “escalating tensions”; it is a tactical punishment and part of a drip by drip approach to circumscribing and complicating Tsai’s capacity to manage practical interactions between Taiwan and China. It is an inconvenience, but more symbolic than coup de grace at this point. But it is also a sign of things to come. [Source]

At Al Jazeera, the University of Nottingham’s Andreas Fulda played down the news, while noting that the move appears “highly unusual”:

“In a way this announcement is much ado about nothing. No one really expected the Chinese Communist Party to establish formal talks with Taiwan anyway,” Andreas Fulda, senior fellow at the China Policy Institute at the University of Nottingham, told Al Jazeera.

“In a sense, I read this to mean communication to the domestic audience rather than anything substantial to frustrate relations.”

[…] “It is a highly unusal act and it seems counterintuitive because if the Chinese Communist Party was keen to win the hearts and minds of the Taiwanese it wouldn’t engage in these kind of activities,” said Fulda.

“In a way we see Taiwan certainly, but also possibly Hong Kong, at the periphery moving further away from China rather than unifying.” [Source]

The current deadlock over cross-strait ties will likely continue unless one side concedes, Lawrence Chung reports at South China Morning Post:

With neither side showing a sign of reaching a compromise, analysts said such a state would remain the status quo until one side relented.

[…] “The standstill will continue until one side can no longer stand it any more,” said Kao Kong-lian, former vice-president of Taipei’s Straits Exchange Foundation, which represented the government in talks with the mainland in the past eight years when Ma Ying-jeou of the mainland-friendly Kuomintang was president from 2008 until this year.

“Possibly the new government will choose to make new statement during a major occasion like national day or the New Year Day’s address to the public about its cross-strait policy,” Kao noted. [Source]

Bloomberg reports that the economic toll of strained relations with Beijing is already being felt in Taiwan with decreased tourism from China.

The economic effects of the tensions are starting to be felt by Taiwan, with Chinese tourist groups in May falling 32 percent from a year earlier to 128,999 people.

Further economic repercussions may put Tsai in a difficult position as she struggles to reverse three consecutive quarters of economic contraction amid waning global demand for the island’s exported goods. Taiwan’s exports to China fell 4.6 percent in May from a year earlier, while overall trade was down 3.5 percent, according to data from China’s General Administration of Customs. [Source]