China Heads for a Showdown with Taiwan 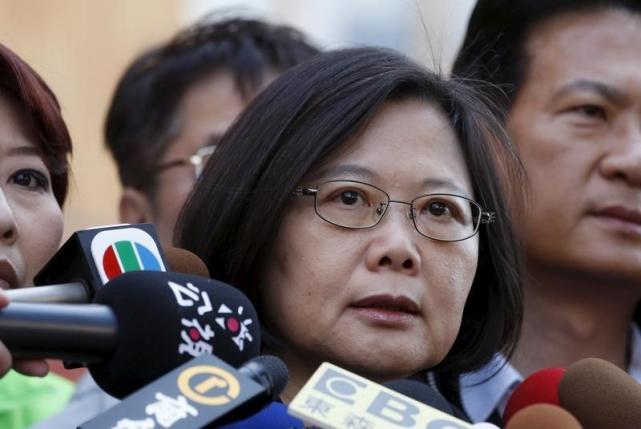 Beijing is ramping up pressure on Taiwan ahead of the May 20th inauguration of its first female president, Tsai Ing-wen, the chair of the pro-independence Democratic Progressive Party who won the island’s presidential election by a landslide in January. At Reuters, Ben Blanchard reports that the Chinese Communist Party has issued a sharp warning to Tsai–who has pledged to uphold the cross-Strait status quo without endorsing the “one-China” principle–that Taiwan and its incoming government will be blamed for any ensuing regional conflict.

Tsai, who assumes office on May 20, has said she will maintain the status quo, but has never conceded to a key bilateral agreement referencing the “one China” principle, which has angered Beijing.

Under the “1992 consensus” with the Nationalists, Taiwan and China agreed there is only one China, with each having their own interpretation of what that means. Defeated Nationalist forces fled to Taiwan at the end of the civil war with the Communists in 1949.

Ma Xiaoguang, spokesman for China’s Taiwan Affairs Office, said it was clear who was “destroying bridges” and trying to change the status quo.

“If there are those who are unclear on this point, or are offering encouragement from the wings, this is really not a sensible act,” Ma told a briefing live on state television.

“We must repeat, if there is deadlock across the Taiwan Strait, or if there is a crisis, the responsibility will be on the heads of those who change the status quo.” [Source]

Following Tsai’s victory, a group of young patriotic internet users in China embarked on an organized campaign to inundate Tsai’s Facebook page and several other media sites with thousands of messages opposing Taiwanese independence. Coverage of the incident, known as the Diba Expedition, has since been controlled.

At Bloomberg, Adela Lin and Debra Mao look at how China might use the various forms of political and economic leverage that it wields over Taiwan to influence outcomes in the case of noncooperation by Tsai’s government.

China has already started showing Taiwan what a less-cooperative future might look like. In March, it scrapped a diplomatic truce with Ma and established relations with the tiny West African nation of Gambia, one of a handful of states that still recognized Taiwan. […]

“Chinese authorities have many cards to play,” said Zhang Wensheng, a professor at Xiamen University’s Taiwan Research Institute and a researcher with the state-backed Cross-Strait Relations Studies Center. “They won’t show all the good cards at the same time, but that also depends on whether Taiwan has seriously antagonized them.” [Source]

Hong Kong University’s Jean-Pierre Lehmann explains that Taiwan’s unique relationship with China poses a particular challenge to Taiwan on the economic front as the island seeks to diversify its economy and establish regional economic ties.

Political tensions notwithstanding, the economic relationship has been very dynamic. Now, it is not just that the Chinese economy is slowing down, but as Chinese production becomes higher value-added, Taiwanese producers wonder if the customers of yesterday are becoming the competitors of today and tomorrow.

Taiwan needs to diversify its economy and technology orientations, for example, into energy, environment, health, oceanography, services and techniques such as mass customization. It is proving nevertheless difficult for Taiwanese corporations to wean themselves off their electronics comfort zone.

Unfortunately for Taiwan, China has much more muscle than it has. While Taiwan’s competitors, notably South Korea, are signing multiple free trade agreements (FTAs) with other countries, Taiwan is hampered from doing so. No country dares to upset Beijing, which considers Taiwan a renegade province under its political domain. This makes it difficult for Taiwan to foster its own trade and economic arrangements, at a time when protectionism is growing, with the world market being carved into multiple regional and mega-regional agreements. [Source]

Beijing already used its economic and political clout to challenge Taiwan’s claim to independence earlier last month when Chinese authorities successfully convinced Kenya to deport Taiwanese telephone fraud suspects to mainland China, where they were prosecuted and forced to confess on state TV. At US News, Paul D. Shinkman reports that the incident has sparked anger from Taiwan, whose leaders see the prosecution as a violation of the Cross-Strait Joint Crime-Fighting and Judicial Mutual Assistance Agreement. Reporting for The Christian Science Monitor, Ralph Jennings writes that the Taiwanese government has since changed its stance in recognition that it can use China’s help in stopping international criminal organizations with local Taiwanese roots. Authorities in Taiwan have expressed “tentative acceptance” when Malaysia deported a separate group of Taiwanese suspects to China last week.