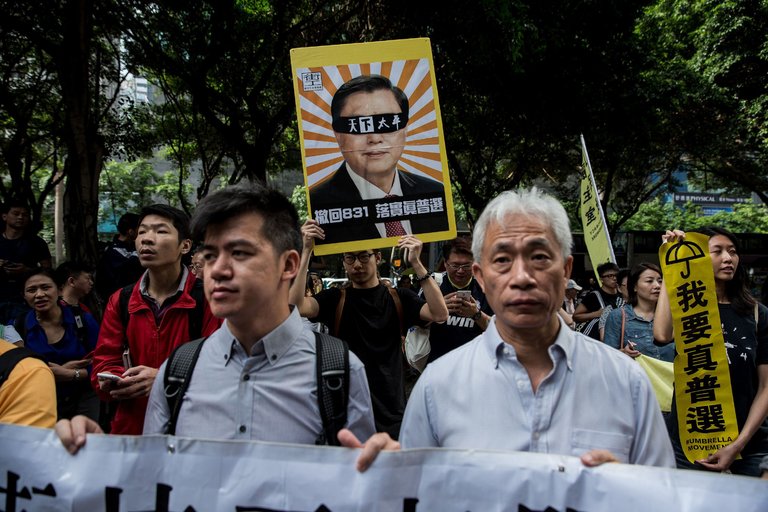 The New York Times’ Michael Forsythe and Austin Ramzy report that relations with Taiwan and Hong Kong are set to be difficult for mainland China to manage, pointing to increased tension throughout Communist Party official Zhang Dejiang’s inspection tour in Hong Kong this week and ahead of President-elect Tsai Ing-wen’s inauguration in Taiwan on Friday.

It is a humbling week for China. The world’s second-biggest economy after the United States, it is richer and stronger than ever, and its financial clout is being felt the world over. But Beijing is finding it exceedingly difficult to win hearts and minds in its own backyard, among the more than 30 million Chinese-speaking people of Taiwan and Hong Kong.

China is searching for a new approach toward both Hong Kong and Taiwan, but it has yet to find one that is different from the policies it has used before — hard-line political tactics that provoke resentment, and pragmatic appeals to economic interests that fall short in societies where the benefits of trade with the mainland are unevenly distributed.

“There are more centrifugal forces, and it’s hard for Beijing to deal with these forces,” said Jean-Pierre Cabestan, a professor of government and international studies at Hong Kong Baptist University. “I think it is a clash between two political cultures: authoritarian in China and liberal in Hong Kong and Taiwan. Hong Kong is very much on the bridge, resisting the authoritarian political culture in China.” [Source]

China has taken several measures in recent months to pressure Taiwan and Tsai Ing-wen’s independence-leaning government to acknowledge the “One-China” policy. In April, Chinese authorities successfully convinced Kenya and Malaysia to deport Taiwanese fraud suspects to mainland China, where they were prosecuted and forced to confess on state TV. Earlier this month, Chinese authorities issued a warning to Tsai that Taiwan’s incoming government will be blamed for any ensuing cross-Strait conflict.

More recently, China has conducted several military exercises along its southeastern coast facing Taiwan. Chinese officials have denied speculation that the drills were coordinated to correspond with Tsai’s inauguration, citing that they were only “routine arrangements” meant to test the troop’s military preparedness. From Michael Martina at Reuters:

Chinese state media have reported that the People’s Liberation Army (PLA) has carried out at least three landing exercises on the country’s southeast coast since the beginning of May.

The largest drill was conducted in recent days by a regiment under the PLA’s 31st Group Army, which is based in coastal Fujian province, across the strait from Taiwan, the official China Daily newspaper said on Wednesday.

“These drills are routine arrangements conducted according to annual training plans,” the ministry said in a short statement on its website.

“They do not target any specific objective. Relevant individuals should not over-interpret [them],” the ministry said. [Source]

In Hong Kong, visiting official Zhang Dejiang has issued a warning to local radical groups not to seek independence. From Reuters:

“There are a very small number of people rejecting ‘one country’ and resisting the central government. They’re even flying the banner of Hong Kong independence,” Zhang said. “This is not a matter of localism, but it’s separatism under the name of localism.”

Zhang also warned people not to break the law but did not refer to any specific offences. “No one can override the law, and no offenders can evade legal jurisdiction with any excuse,” he said. “Society should severely condemn those actions which challenge the rule of law.”

He said the “one country, two systems” framework, under which Beijing allows Hong Kong a high degree of control over its own affairs as well as civil liberties unseen on the mainland, is in the city’s best interests. [Source]

Concerns about Beijing’s increasing interference in Hong Kong erupted two years ago when protesters demonstrated in large numbers to oppose a proposed electoral reform that would require all candidates for chief executive to be vetted by a pro-Beijing panel. Last year, Chinese authorities took five Hong Kong booksellers and publishers into custody for an investigation into alleged “illegal activities.” The men’s disappearance prompted fears that Beijing has undermined the “one country, two systems” formula governing relations between Hong Kong and mainland China.