Bookseller Returns to HK, Denies He Was Abducted 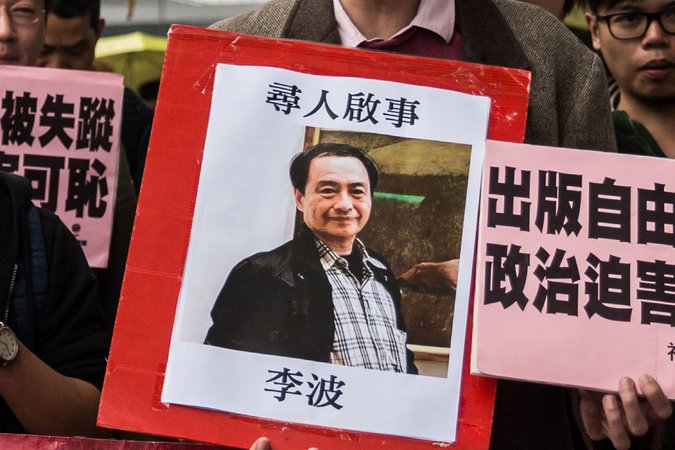 Lee Bo, one of five Hong Kong-based publishers and booksellers who disappeared last year to later turn up in China where they were believed to be in detention, has returned to Hong Kong, and publicly stated that he entered China of his own will. The disappearance of the five, all connected to Mighty Current Media, a company known for publishing salacious titles on the lives of CCP leaders, sparked protest in Hong Kong, where concerns over the erosion of free speech and Beijing’s increasing political influence have been mounting for years. At The New York Times, Austin Ramzy reports:

The case of Mr. Lee, also known as Lee Po, was particularly troubling to civil society advocates because he disappeared from the streets of Hong Kong, and it is still unclear how he crossed a border with Guangdong Province on the mainland. He is widely suspected of having been taken by mainland security officers, although he told the Hong Kong authorities that he had “returned to the mainland by his own means voluntarily and it was not an abduction,” the police said in a statement.

The authorities said Mr. Lee had been handed over to police and immigration officers on Thursday afternoon at a checkpoint on Hong Kong’s border with the mainland city of Shenzhen. He told the police that he had traveled to the mainland to help with an investigation.

[…] Mr. Lee told the police that he was “free and safe” while in the mainland and asked for his missing person case to be dropped.

Lee had previously denied his abduction in a secret meeting with his wife and in a televised interview with Phoenix TV.

The AP reports on comments that Lee gave to Chinese media indicating that he has promised not to continue publishing the types of titles Mighty Current is known for:

He promised he would no longer sell the kinds of books Mighty Current used to market, according to a Chinese media report, leaving the company’s future in doubt.

“I will not publish or sell books that are sheer fabrication,” Lee told Chinese reporters after he crossed the border back into Hong Kong, according to The Paper, a state-funded news site. “Press and speech freedoms do not mean you can make things up. There are still people in Hong Kong who are doing that and I hope they will no longer do that.” [Source]

Lee, a British passport holder, also promised that he would give up his British residency in the Phoenix TV interview. Three of the other publishers have been released on bail while pending investigation; one of whom, Cheung Chi-ping, claimed that he was free to travel between Hong Kong and the mainland after he was spotted by a reporter in Sha Tin. The fifth, Gui Minhai, a Swedish citizen who was detained from his summer home in Thailand, is believed to still be in detention without a charge. In January, Gui appeared on CCTV confessing to a ten-year-old hit-and-run and claiming that he traveled to China voluntarily; many believed the CCTV confession to have been made under duress.