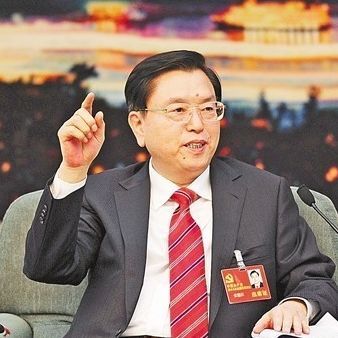 Zhang Dejiang, the third in command in the Communist Party after Xi Jinping and Li Keqiang, is the top Chinese official in charge of Hong Kong and Macau affairs. He arrived in Hong Kong Tuesday for a forum on the “One Belt One Road” project, becoming the highest-ranking Beijing official to visit the territory since former President Hu Jintao visited in 2012. Upon his arrival, he expressed support for the work of Chief Executive Leung Chun-ying and the Hong Kong government, and pledged to listen to the people of Hong Kong, many of whom are concerned about Beijing’s increasing interference in the territory ahead of elections for the chief executive position next year. Gary Cheung and Stuart Lau report for the South China Morning Post:

It was all smiles when Zhang stepped off his plane at midday, as a beaming Leung and his top cabinet members laid out the red carpet for the chairman of the National People’s Congress.

In his opening remarks at the airport, Beijing’s top official in charge of Hong Kong affairs said he was in the city to see, listen and learn.

That was followed by a closed-door meeting with Leung at government headquarters in Admiralty which, in an unexpected move, was shared with the public through the release of a video clip.

In a carefully calibrated speech, Zhang said President Xi Jinping had already given his “full endorsement” to Leung during his annual duty visit to the capital last December. [Source]

AFP also reports on Zhang’s comments upon his arrival:

In a short speech on the tarmac, he said he brought a “caring heart” from the Chinese central government as well as “hearty greetings and good wishes” from China’s President Xi Jinping.

He noted there was “very nice weather” in both Beijing and Hong Kong, and said he would look at the work of the Hong Kong government and the changes in the lives of city residents.

He also pledged to listen to a variety of political views. “(I will listen to) people from all walks of life about any suggestions and demands regarding the implementation of ‘one country two systems’,” said Mr Zhang, referring to the semi-autonomous system under which Hong Kong is governed since being handed back to China by Britain in 1997. [Source]

Zhang’s conciliatory tone is being matched by a heightened security presence in Hong Kong around his visit in an effort to stave off any potential protests. Hong Kong Free Press reports on some of the measures being taken to secure Zhang’s visit:

Costly construction projects are being suspended to ease his brief commute through Wan Chai from the Grand Hyatt Hotel, where he will be staying, to the Convention and Exhibition Centre, where he will deliver the keynote address at a summit focused on China’s ambitious “One Belt, One Road” trade strategy.

Otherwise, you see, there wouldn’t be enough room to accommodate Zhang, his personal bodyguards, elite sharp-shooters from the Central Security Bureau, members of the Hong Kong Police Department’s VIP Protection Unit and, finally, the pièce de résistance: an army of 6,000 police officers (working in two 3,000-strong shifts) who will be trailing Zhang and his entourage wherever they go while he is in the city.

All this for a man 99 percent of the people in Hong Kong would not recognise if he were staring them in the face. [Source]

Hong Kong authorities went so far as to glue down bricks to prevent protesters using them as projectiles, Ilaria Maria Sala reports for The Guardian:

Protests have been banned during the three-day visit of Zhang Dejiang around 18 May, and 6,000 police will be on duty at any one time.

The counter-terrorism unit, the police tactical unit and the airport security unit will all be mobilised, while swaths of Hong Kong will be put into virtual lockdown.

To ensure they cannot be used as missiles again, the city administration has ordered a layer of glue to be applied to each pavement brick in the areas leading up to the legislative council.

Torrential rains early in the week washed off part of the glue, but the bricks remained solidly anchored – with their secured borders shining brightly under Hong Kong’s night lights. [Source]

Journalists in Hong Kong have expressed concern that they would not be allowed to report freely from inside the security zone implemented around Zhang, Chantal Yuen reports for the Hong Kong Free Press:

The police also said originally that journalists would not be able to report from within the security area. While they will allowed to film in the area, they will not be allowed to interview. Two security areas estimated to hold around 80 reporters in total have been set up.

However after a meeting on Sunday, Sham Yee-lan, the chairwoman of the Hong Kong Journalists’ Association said that the police had told her that – at appropriate times and depending on the situation – they will try their best to fulfil requests by journalists.

“In my memory, this is the first time that [journalists are] not allowed in the security area to let them freely interview. Reporters can freely move about, but cannot freely interview” said Sham.

James To told local media that “How can the media do their work? Media represent the public. If you prevent journalists from reporting directly, this is not an appropriate arrangement.” He also said that it was “ridiculous” that the police were saying that they are not able to say how big the security area will be. [Source]

Despite the ban on protests, some activists pledged to take guerrilla actions to confront Zhang, according to Ting Shi of Bloomberg:

Demonstrators were expected to test the security cordon around the Hong Kong Convention and Exhibition Centre in Wan Chai on Wednesday, where Zhang Dejiang, the Communist Party’s No. 3 official, was slated to attend a conference. While at least one group planned rallies outside the venue, others including Demosisto, a political party founded by former student leaders involved in the 2014 Occupy protests, promised more unconventional forms of civil disobedience, such as rushing Zhang’s car.

“The Hong Kong government wants to create a picture that there is no objection in this city about the rulings from Beijing,” said Demosisto Chairman Nathan Law, who pledged more “guerrilla style” tactics in a Facebook post after police pressed him to the ground and prevented his group from approaching Zhang’s motorcade. “We want to have direct action.” [Source]

Police officers also camped out atop Lion Rock, where pro-democracy activists hung a protest banner in October 2014, in order to prevent a similar occurrence. But on Monday night, an activist group called the League of Social Democrats still managed to hang a banner reading “I want genuine universal suffrage” on neighboring Beacon Hill.

Several lawmakers in pan-democratic parties have declined an invitation to attend a banquet with Zhang, though four have been invited to and will attend a reception before the banquet. From The South China Morning Post:

[…] The invitation for lawmakers to meet Zhang came after at least 18 lawmakers from the pan-democratic camp said they would not attend the banquet.

Lau said she would be attending the meeting with Zhang after consulting with her party.

“Hong Kong people are now angry and jittery as Beijing is stepping up interference in Hong Kong’s internal affairs,” she said. [Source]

A number of recent incidents have raised concerns in Hong Kong about Beijing’s interference in the territory ahead of the 2017 election for chief executive, including the detentions of several publishers and booksellers and a tightening of the media environment. Student activists who participated in the fall 2014 Occupy Central protests have vowed to launch a new political party in time for Legislative Council elections in September. Other protests have turned violent, including the “fishball” protests over Lunar New Year.

Zhang has also been targeted by protesters for his role as Party chief of Guangdong Province during the SARS epidemic in 2003, which spread to Hong Kong and the world after the Chinese government failed to acknowledge its severity.

At the start of his three-day visit, Mr. Zhang said he remembered “vividly” working, as party chief of Guangdong Province, with the Hong Kong authorities to contain SARS, or severe acute respiratory syndrome. The disease first infected humans in the southern province of mainland China in 2002 and went on to claim 774 lives worldwide.

Mr. Zhang oversaw efforts to play down the viral outbreak that spread to Hong Kong. The disease eventually took 299 lives here, the highest death toll in any single city. As a result, some in Hong Kong reacted to his comments with shock.

“It’s really ironic for him to say that: Had he not covered up the outbreak, it wouldn’t have killed so many people here,” said Nathan Law, a protester whom police pressed to the ground when he tried to block Mr. Zhang’s motorcade as it arrived at his hotel in the Wan Chai neighborhood on Tuesday. “He has blood on his hands.” [Source]