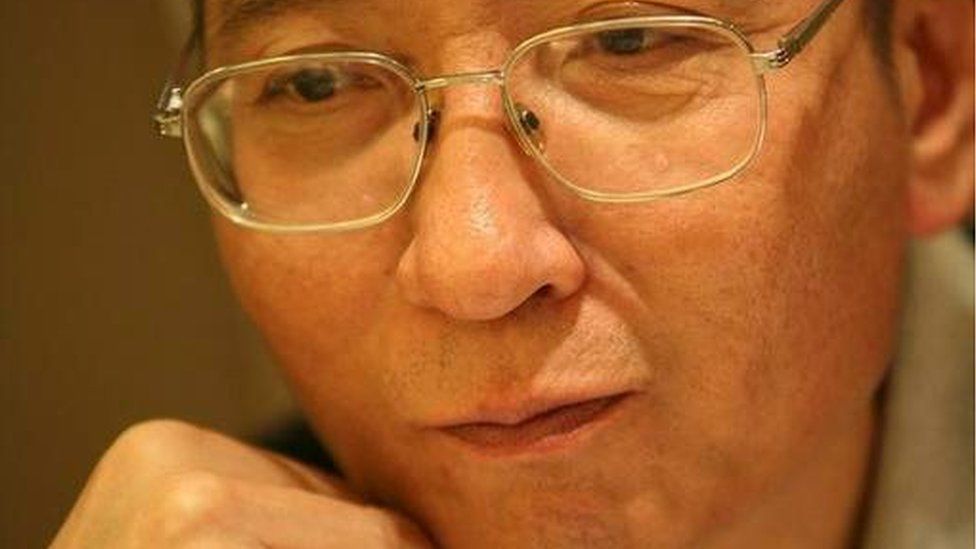 The Chinese government is heavily censoring all domestic news reports on Liu Xiaobo in an effort to control and shape the narrative over the imprisoned Nobel Peace Prize laureate’s impending death. Liu’s health has been deteriorating rapidly since he was diagnosed with terminal liver cancer in May and given medical parole to receive treatment at the First Hospital of China Medical University in Shenyang. Western governments and human rights groups have been calling for the Chinese government to grant Liu his expressed wish to go overseas for better treatment. Gerry Shih at AP reports:

Chinese media have hardly mentioned repeated calls by the U.S., the European Union and others for Beijing to let Liu leave on humanitarian grounds. Instead, state media provided extensive coverage this past week of President Xi Jinping’s recent achievements, especially his travels to Russia and Germany, which they portrayed as a massive public relations triumph for China.

On Tuesday, state newspapers including the official People’s Daily and the English-language China Daily trumpeted Xi’s call to “unswervingly advance” China’s judicial reform and improve the military. Meanwhile, the daily barrage of questions about Liu fired off by the international press at foreign ministry news briefings has been excised from the ministry’s published transcripts, as if they were never asked.

[…] Outside of official channels, unauthorized discussion of Liu has been swiftly punished. A police document that surfaced on the Internet this week described how a 38-year-old man in central Hunan province had been detained for seven days for discussing Liu’s situation on WeChat, a social media messaging app.

The Chinese state’s information control seems to have worked as many in China appear to be unaware of Liu’s existence. From BBC’s Stephen McDonell:

As an exercise I have been asking “ordinary” Chinese people in recent days about Liu Xiaobo.

My questions were met with a blank expression – er, who?

People do not even seem to know that China has had a Nobel Peace Prize winner.

When Western journalists visited the hospital in Shenyang and asked the nurses on duty where Liu Xiaobo was, they not only could not find his name on the database but appeared to have never heard of him, along the lines of “Sorry could you spell that name again? Why have so many people have been asking about this man? Who is he?”

For the Chinese government this represents mission accomplished.

As for the country’s reputation overseas they will just plan to ride this one out like they have with other unpleasant subjects. [Source]

For Foreign Policy, James Palmer writes about how the government’s control over the narrative of Liu and other dissidents impacts the public’s views that they are to blame for their own misfortune:

Many Chinese, like other residents of authoritarian states, don’t want to confront what officialdom could do to them at any moment. When the government crushes people, then, it must be the victim’s fault. They should have known what would happen. They shouldn’t have been so arrogant. They should have realized who they were up against.

That’s why the government has always been relatively comfortable with talking about Liu and others who directly and forthrightly challenge the system. Indeed, Liu’s Nobel Peace Prize saw a concerted blast of Chinese media coverage (after a week of silence where the system processed the news). People like Liu are potential object lessons; cross the line and we will destroy you – and it’ll be your own fault. [Source]

The media blackout comes amid a state-led propaganda campaign that involved media publications of leaked video recordings of Liu in the hospital, in which doctors are shown saying that he is receiving sufficient treatment in Shenyang and does not need to be sent abroad. Chinese officials’ claim that Liu is too unwell to travel is challenged by two foreign visiting doctors, who issued a joint statement earlier this week indicating that Liu can be safety transported overseas for the remainder of his care.

Observers believe that the Chinese government is reluctant to send Liu abroad for treatment due to the regime’s fear of losing control over his speech once he leaves the country. Some diplomats stationed in Beijing told The Guardian that they believe the Chinese government is deliberately stalling so that Liu will never have a chance to go abroad. Authorities’ attempt to keep Liu silent in his final days have rallied supporters to fight for Liu’s legacy. Chris Buckley at The New York Times reports:

“They want everything to be controllable, and if he went abroad, he would lie beyond their control,” Cui Weiping, a retired professor of Chinese literature and friend of Mr. Liu, said from Los Angeles, where she now lives. “This has always been the purge approach for dealing with dissidents — minimize their influence so they don’t become a focus.”

Yet while the government wants Mr. Liu to stay silent and to ensure that his legacy fades as quickly as possible, his supporters have mobilized, despite intense restrictions and police warnings. They want to win him the right to speak out, go abroad for palliative treatment and decide how he is memorialized.

[…] Even after Mr. Liu dies, his funeral arrangements could become a focus of contention. Chinese rules say that prisons control the funerals of prisoners and can cremate them even if the family objects.

But the “whole area of the rights of individuals serving sentences on medical parole is a murky one indeed, including funereal rights,” said John Kamm, the founder of the Dui Hua Foundation, an organization in San Francisco that has worked to free Chinese prisoners. [Source]

Liu’s case follows a familiar pattern seen in the Chinese Communist Party’s history of withholding medical treatment to political dissidents and government critics. Verna Yu at Quartz looks at some of the individuals who have suffered medical distress while in custody:

Indeed, the party has a history of intentionally denying or delaying adequate medical treatment to such critics, or people deemed “enemies of the state.” During the era of chairman Mao Zedong, many of China’s intellectual elites were sent to labor camps and jails, where harsh conditions and the denial of health care often led to poor health and early death. Those who survived suffered from chronic illnesses and mental trauma that lasted for the rest of their lives.

[…] With the launch of the “reform and opening up” era in the 1980s, the brutal class-based ideology of the party was in gradual decline, as Liu Xiaobo also noted—only to make a comeback in recent years under president Xi Jinping, as government critics languishing in custody with ill health died under suspicious circumstances.

Activist Cao Shunli died in hospital in March 2014, three weeks after she fell into a coma under unknown circumstances and was granted medical parole. She was detained by police six months earlier for staging protests on the charge of “picking quarrels and provoking trouble.” Her lawyer said she was denied treatment for tuberculosis and liver disease, and her family, denied visits while she was alive, said her body appeared bruised and swollen.

In July 2015, Tibetan monk Tenzin Delek Rinpoche died in a Chinese prison after having served 13 years on separatism and terror charges. His family applied for medical parole, citing a heart condition, but were ignored. [Source]

In newly released video footage, wife Liu Xia revealed in an interview that the Nobel laureate never thought he would be arrested for co-authoring the Charter 08 democracy manifesto, for which he was sentenced to eleven years on charges of subversion. From FactWire:

In several previously undisclosed clips obtained by FactWire, Liu Xia said the arrest was executed illegally, and it that ‘never came into Liu’s mind’ that he himself could be arrested because of the ‘Charter 08’ petition he helped draft. The document called for democratic reforms in China.

[…] Liu Xia said in the interview that her husband did not talk too much about ‘Charter 08’. She herself however was anxious for sensing something bad was about to happen, but was called ‘crazy’ by her husband.

Liu Xia also described the arrest made by the Beijing Municipal Public Security Bureau in 2008, recalling a knock on the door at 11pm by the police.

‘They took something, with no conviction (written on it). I was not given anything, and they let Xiaobo sign it. Xiaobo didn’t sign it and argued with them. Xiaobo said it is because they didn’t write down the charges,’ said Liu Xia.

Liu Xia emphasized that ‘nothing was written’ on the detainment document, and while the law states that a family member should be given a copy of the document, she received nothing. Liu Xia further stated that her husband was under ‘residential surveillance’ for almost three months, but she received no written notice from the authorities, contrary to official regulations. [Source]

In Australia, cartoonist Badiucao has pasted up images on streets honoring Liu and his wife, writer Liu Xia:

human rights is the coolest thing on the earth！ Free #LiuXiaobo pic.twitter.com/1SIwLTt3Zt