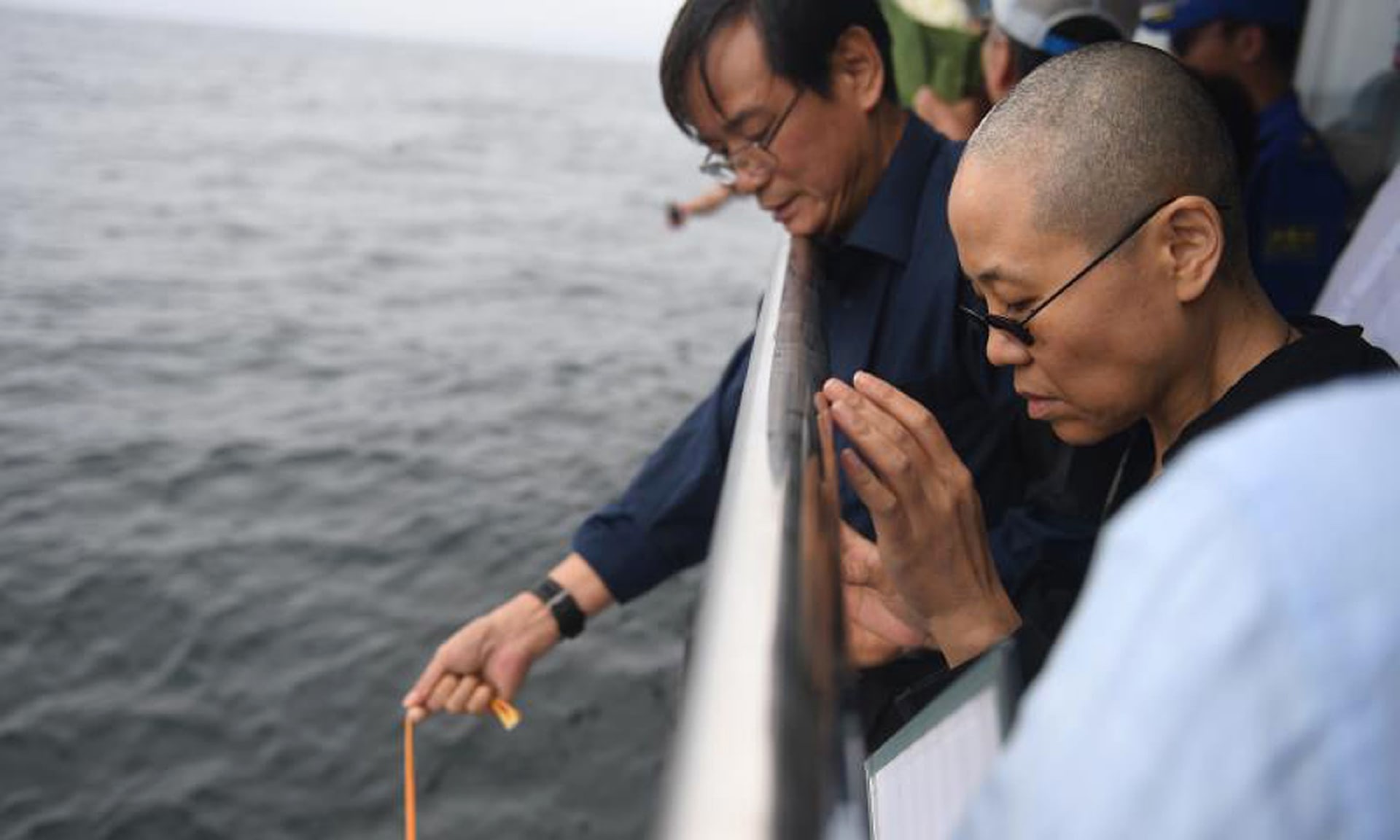 Human Rights Watch fears that Beijing-based poet and artist Liu Xia, the wife of deceased Nobel Peace Prize laureate Liu Xiaobo, has been forcibly disappeared. She was with Liu when he died in custody last week after battling liver cancer amid international criticism of Beijing for denying him the right to travel abroad to seek treatment as he had wished. In the days following Liu Xiaobo’s death, friends and supporters have expressed concerns over the health and safety of Ms. Liu, whose whereabouts remain unknown and who has not been seen nor heard from since she attended her husband’s funeral on Saturday in proceedings closely orchestrated by the Chinese government. Despite never being charged, Liu Xia has been under de facto house arrest and kept largely isolated from the outside world since her husband won the Nobel Peace Prize in 2010.

Liu Xia was last seen in an official photo taken on July 15, in which she and a few relatives are lowering an urn containing Liu Xiaobo’s ashes into the Pacific Ocean at a beach near Dalian, a city in northeast China. Since then, her friends and relatives in Beijing have not been able to reach her directly. According to international and Hong Kong media reports, on July 19, authorities have forcibly taken Liu Xia for a “vacation” in the southwestern province of Yunnan.

[…] An enforced disappearance is defined under international law as the arrest or detention of a person by state officials or their agents followed by a refusal to acknowledge the deprivation of liberty, or to reveal the person’s fate or whereabouts. Enforced disappearances place the victim at greater risk of abuse and inflict unbearable cruelty on family members and friends waiting to learn of their fate.

[…] Since Liu Xiaobo’s death, Chinese authorities have also systematically prevented his supporters from holding commemorative activities. On July 18, police detained Dalian-based activists Jiang Jianjun and Wang Chenggang for throwing a bottle with a message to Liu at the beach near where Liu’s ashes were scattered. Jiang was later given 10 days’ administrative detention. It is unclear whether Wang has been released. Ding Jiaxi, a Beijing-based human rights lawyer, was detained at a Shenyang police station from July 13 to 15 after he protested in front of the hospital where Liu received treatment. Beijing police have held activist Hu Jia under house arrest since June 27 to prevent him from going to the Shenyang hospital or participating in memorial activities. [Source]

The Guardian’s Tom Phillips has more:

“She’s totally incommunicado,” said Jared Genser, a US human rights lawyer who has campaigned on behalf of the late dissident and his wife. “It seems like she has fallen off the face of the Earth.”

Hu Jia, a Beijing-based activist and friend, also said he was in the dark: “We’ve tried every means possible to contact her.”

[…] Friends and supporters say that is a mendacious fabrication designed to conceal her continued extra-legal incarceration. “I think she’s in an even worse position than before,” said Genser.

“Her husband is dead. We are not aware that she has any contact with anybody at all. Her parents have both passed away. Her brother is also incommunicado and disappeared. And she is the only person now who can speak to what she heard from Liu Xiaobo in the last seven years of her being under house arrest and in his final weeks of life.”

Jerry Cohen, an expert in Chinese law and human rights from New York University, said he believed the rulers of one-party China would be reluctant to release Liu Xia in case she became a figurehead of resistance. [Source]

A number of foreign governments and rights groups have urged China to lift all restrictions on Liu Xia’s movements and allow her to leave the country if she wishes to. Zeid Ra’ad Al Hussein, the United Nations’ High Commissioner for Human Rights, said on Thursday he intends to meet with Chinese officials to push for Liu’s freedom. Michelle Nichols at Reuters reports:

“I intend to have a meeting with Chinese officials,” Zeid told reporters in New York. “We are now focused on his wife and trying to ensure that she has freedom of movement and that if she wants to leave China she should be able to leave China.”

[…] China has said the case of Liu Xia remains an internal matter.

“The claim was that there was never any real restriction, but the feeling was that she was being restricted. We want to use this moment to assure ourselves that she is able to leave if she wants to,” Zeid said. [Source]

Beijing, however, has shown no sign of backing down on the issue, according to Edith M. Lederer at AP:

China’s Foreign Ministry said in a statement responding to Liu’s death and calls for Liu Xia to move freely that foreign countries “are in no position to make improper remarks” over the handling of Liu’s case, which Beijing sees as a domestic affair.Zeid responded to China’s claim that it’s a domestic issue and the U.N. and foreign countries are interfering saying the U.N. General Assembly made very clear during the apartheid era in South Africa that criticism does not amount to intervening in another country’s affairs.

Zeid responded to China’s claim that it’s a domestic issue and the U.N. and foreign countries are interfering saying the U.N. General Assembly made very clear during the apartheid era in South Africa that criticism does not amount to intervening in another country’s affairs.

“So I’ve invited the Chinese, I’ve invited all of them to claim it, to present a legal argument in defense of that position,” the human rights chief said. “We hold up a mirror basically — you’re committing the abuse, not us.” [Source]

Despite ongoing government censorship and harassment, Liu Xiaobo’s supporters have found ways to commemorate him and the legacy he left behind. From Gerry Shih at AP:

Liu’s supporters have sought to commemorate him by visiting beaches, to the dismay of authorities. Ye Du, a close friend, told Hong Kong media on Wednesday that police arrived at his home bearing fruit and cigarettes in an effort to cajole him not to go near “rivers and oceans.”

[…] Outside China, supporters gathered on beaches to mourn while others turned Liu’s sea burial into a meme as people on Wednesday posted pictures of an empty chair — a reference to Liu’s unoccupied seat at the Nobel Peace Prize ceremony in 2010 while he was imprisoned — next to bodies of water.

[…] In Australia, supporters held a candlelight vigil in Melbourne in an alley where a dissident artist known as Badiucao had drawn a picture of Liu.

Other supporters found creative ways to mourn online. On a popular Chinese music streaming service, users this week left a string of comments about a song titled “The Ocean” by the late Taiwanese pop singer Chang Yu-sheng. Some mentioned Liu’s name while others were more oblique in their messages.

“Floating with ocean currents, you’ll never be forgotten,” one said, while another said, “They think it’s over, but they don’t know that every place that the waves will touch will hold your memory.” [Source]

Read more about Liu Xia and Liu Xiaobo, via CDT.