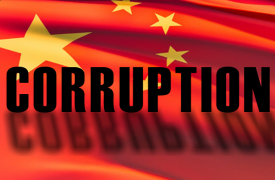 As the CCP gears up for the 19th Party Congress this fall, Xi Jinping’s anti-corruption drive is continuing apace. Xinhua recently quoted Xi emphasizing the importance of keeping up the fight against graft within the Party:

The progress made in governing the party since the last party congress held nearly five years ago had been praised by the people, the official Xinhua news agency late on Thursday cited Xi as saying.

“But we absolutely cannot be self-satisfied and blindly optimistic. Strictly governing the party is still a heavy burden,” Xi told a meeting of provincial and ministerial government officials.

“We will forever be on the path of comprehensive, strict governance of the party. One political party, one political authority, it’s prospects and fate rest on the support of the people,” Xi said. [Source]

The latest casualty in this anti-corruption drive is Zhang Huawei, an inspector for the Central Commission for Discipline Inspection (CCDI), who was himself expelled from the Party for violating discipline. Xinhua lists his suspected offenses:

Zhang, a former inspector of central inspection teams, was found to have severely violated political discipline, interfered with the work of the institutions being inspected, and resisted investigation.

Zhang led the inspections of several institutions, including the General Administration of Sport of China and the China Huadian Corporation.

Zhang was also accused of taking bribes, said the CCDI.

The investigation found that Zhang traded power for money and gifts, and attended banquets that could influence fairness in official duties. [Source]

The Central Commission for Discipline Inspection (CCDI) said in a statement on its website that Zhang Huawei, a vice-ministerial level inspector from the Central Inspection Team, had “lost his ideals and convictions”, and damaged the reputation of the commission.

It said Zhang’s case would be referred for prosecution.

[…] The CCDI first announced an investigation into Zhang in April as it ramped up a campaign to expose corruption within its own ranks.

Respected Chinese financial magazine Caixin reported at the time that Zhang’s detention was likely linked with the commission’s probe into the finance sector. Insurance regulator Xiang Junbo was placed under investigation earlier that month. [Source]

CCDI has been under fire from gadfly billionaire Guo Wengui, who has used social media to lob explosive allegations of corruption and personal wrongdoing against top Chinese political, business, and media leaders, focusing on Wang Qishan, the head of the CCDI since 2012 and a Politburo Standing Committee member. While the Chinese government has countered with a propaganda blitz discrediting Guo and censoring commentary about him, his allegations have circulated widely online and gained him hundreds of thousands of followers on social media. Prominent among Guo’s pronouncements is information alleging that Wang Qishan’s wife is a U.S. citizen, that Wang and his family have secretly acquired massive amounts of wealth through the secretive Chinese conglomerate HNA Group Co., Ltd., and that he has other children abroad, in violation of Party discipline rules. (CDT is not able to independently verify Guo’s information.)

Meanwhile, China’s most-wanted fugitive has confessed to corruption after turning herself into authorities. Reuters reports:

Yang Xiuzhu, a former deputy mayor of Wenzhou in the booming eastern province of Zhejiang who was on the run for more than 13 years, confessed to corruption and bribery charges during a trial held on Friday, official news agency Xinhua reported.