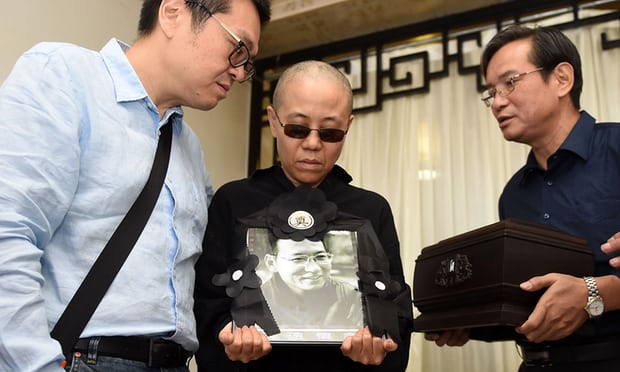 Liu Xia’s U.S.-based counsel Jared Genser has filed a formal complaint to the United Nations this week condemning the Chinese government for her “enforced disappearance,” while calling on the international community to intervene. The widow of late Nobel Peace Prize laureate Liu Xiaobo has been held incommunicado since her husband died of terminal liver cancer on July 13th while serving an 11-year sentence for “inciting subversion against state power.” Liu Xia’s whereabouts are currently unknown. She has not been seen since her last public appearance in photos released by Chinese authorities showing her taking part in her husband’s sea burial on July 15th. From Tom Phillips at The Guardian:

In his petition to the UN’s working group on enforced or involuntary disappearances, requesting “urgent intervention”, he wrote: “According to international law, an enforced disappearance involves (1) deprivation of liberty against the will of the person; (2) involvement of government officials; and (3) refusal to acknowledge the deprivation of liberty or concealment of the fate or whereabouts of the disappeared person.”

Genser told the Guardian: “It is crystal clear to me that what has happened to Liu Xia falls squarely and unequivocally within this definition.”

[…] Genser said he expected that, having received his complaint, the UN body would now ask Beijing to respond to claims that Chinese security forces were behind Liu Xia’s disappearance. He hoped the move would force Beijing to “reappear” Liu Xia, who has never been charged with any crime, and allow her to leave China. The United States, Germany and Britain are among the governments that have called for her release. [Source]

From Genser at The Wall Street Journal:

I was hired by Ms. Liu to help her family in mid-2010, a few months before the announcement of the Nobel Prize. As that date approached, we discussed if it made more sense for her to stay in China or fight for his freedom from abroad if he were to win the prize. Despite my concerns about restrictions to her liberty if he won, she told me unequivocally, “My place is in China with my husband.”

Within a week of the prize announcement, the authorities created a permanent security cordon around Ms. Liu. She was forced to lived under strict house arrest in her one-bedroom apartment in Beijing. She was allowed to visit her husband once a month, but had no access to the internet, couldn’t send or receive mail and couldn’t freely use a telephone. A few times journalists broke through security and short videos showed her in severe distress.

[…] Both of Ms. Liu’s parents, who were allowed to visit her every month during her earlier years in detention, died while she was under house arrest. It’s no wonder she suffered severe depression, had a heart attack and otherwise saw her own health deteriorate dramatically.

Throughout this time, the Chinese government claimed to the U.N. that Ms. Liu was “under no legal restriction.” That was in one cynical respect true; there is no legal house arrest in China, meaning she has been held illegally. [Source]

Relatives say Liu Xia has now been brought back to Beijing, following speculation that she was taken by authorities against her will to an undisclosed location in Yunnan Province. However, it remains unclear where she is within the capital and whether she has been allowed to return to her apartment. Diplomats from the German embassy were blocked by security guards when they tried to locate her at her Beijing flat on Thursday. From Kyodo:

“Liu Xia’s family members confirmed at 10am that both Liu Xia and Liu Hui [her brother] are in Beijing today,” the centre said in a statement, although it was unable to confirm whether she was at home.

But some of Liu Xia’s close contacts – including her lawyer, Mo Shaoping, and friends Ye Du, a dissident poet, and activist Hu Jia – said they had not heard any news of her whereabouts.

Hu said there was no sign to suggest that Liu was back home as of Monday evening, citing other activists who had checked on her apartment.

“Her being back in Beijing and back in her apartment are two different things,” Hu said. “She might still be locked up or she’s been placed with relatives in Beijing upon returning to the city.” [Source]

Authorities are expected to do everything they can to prevent Liu Xia from speaking out to the outside world, including using her silence as a condition for her brother’s freedom. From Ilaria Maria Sala at Quartz:

She likely is or was recently in the company of her brother Liu Hui. In 2013, authorities sentenced her sibling to 11 years in prison for “fraud,” in a trial widely condemned as politically motivated. He was soon released on parole; now, some observers believe his continued freedom is contingent upon his sister staying in line.

“If she manages to go out and talk to the world, they can end his parole,” says Perry Link, a prominent scholar at the University of California, Riverside. “It is a crude form of hostage taking.”

There is little hope that Liu Xia—who’s never been accused of a crime—will see freedom anytime soon. For now authorities appear more concerned with keeping her from making statements to international media. An attempt by a Sky News crew to visit her Beijing apartment last week resulted in reporters getting roughed up at the entrance. [Source]

Although China’s treatment of Liu Xiaobo has generated a global backlash against Xi Jinping’s regime, some critics note that Western governments have not taken enough concrete actions to hold the Chinese government to account over Liu’s death, other than calling for the release of his widow. A bill in the U.S. Senate would urge Beijing to free Liu Xia and voice support for the U.S. government to grant her permanent resident status. Josh Rogin at The Washington Post reports:

“The Government of the People’s Republic of China should permit Liu Xia the freedom to leave China and travel to a place of her own choosing,” the Senate resolution states. “It is in the national interest of the United States to grant lawful permanent resident status to Liu Xia if she is permitted to travel to the United States.”

The Cruz-Leahy resolution does not prevent the Senate from later taking up Cruz’s bill to rename the street in front of the Chinese Embassy “Liu Xiaobo Plaza,” but that bill will require more time to go through the legislative process.

The resolution also praises Liu Xiaobo’s long history as a democracy and human rights activist in China, dating back to the Tiananmen Square protests and massacre in 1989 and including his role in co-writing Charter 08, a manifesto calling for freedom and democracy in China. [Source]

The Chinese government is particularly concerned over the possibility that Congress will pass a legislation renaming the street on which the Chinese embassy is located to “Liu Xiaobo Plaza” in honor of Liu’s legacy. In a separate article, Josh Rogin looks at how the issue is set to become “a major irritant in the U.S.-Chinese relationship.”

Yang urged the Trump administration to influence key members of Congress and publicly promise a presidential veto. Yang told Tillerson this was a critical moment in U.S.-Chinese relations and renaming the plaza would seriously affect Chinese cooperation on major issues. Tillerson told Yang the Chinese government should engage with Washington on Liu’s case.

In an interview, Cruz rejected Beijing’s objections and said he is in discussions with Senate leadership to move the bill forward. “I’m glad to hear it’s got their attention,” he said. “I’ll be even more glad when they change their conduct and stop being gross human-rights abusers.”

The bill is modeled on a Cold War example, when in 1984 Congress acted to rename the street in front of the Russian Embassy for Soviet dissident Andrei Sakharov, who won the Nobel Peace Prize in 1975. Sakharov was arrested and condemned to internal exile from 1980 until 1986. [Source]