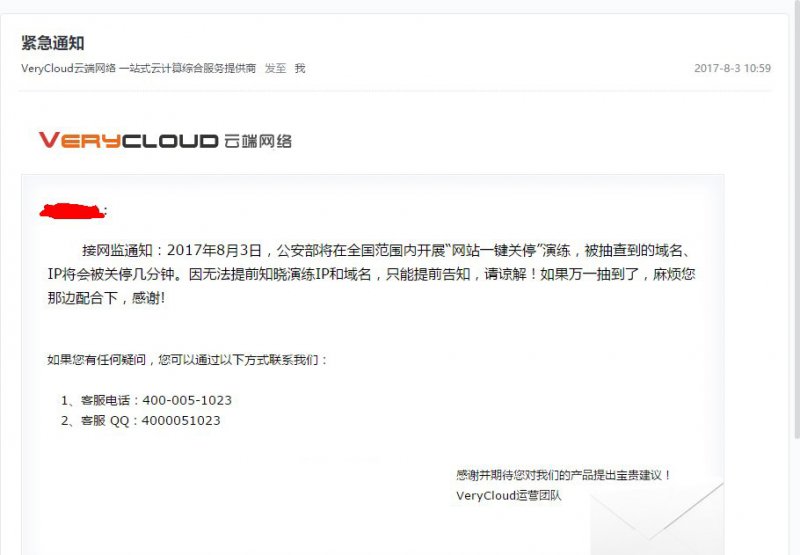 A rapid “emergency response” method for shutting down “harmful” websites which Chinese internet data centers and cloud companies were required to test on August 3, 2017.

China’s Ministry of Public Security called for the drill “in order to step up online security for the 19th Party Congress and tackle the problem of smaller websites illegally disseminating harmful information”, according to a document circulating online attributed to a cyber police unit in Guangzhou.

[…] Several service providers, including 21Vianet Group and VeryCloud, issued notices to users, warning of possible temporary service disruptions on Thursday afternoon as a result of the drill, which were confirmed to Reuters by their customer service representatives. […] [Source]

The notice sent out by the VeryCloud cloud service provider is translated below: Network Connection Inspection Notification: August 3, 2017, the Ministry of Public Security will launch a nation-wide “website one-key shutdown” drill. Randomly inspected domain names and IP addresses may be shutdown for several minutes. Because we are unable to know ahead of time which domains and IP addresses will be affected, all we can do is inform you of the drill ahead of time, please understand! If by chance you are affected, please cooperate, much thanks! If you have any questions, you can contact us by:

Thank you and we look forward to your valuable feedback on our products!

While the notice on the drill was not posted on the Ministry of Public Security website, other cloud service providers also notified their customers, and users in the V2EX development community BBS and on Reddit noted receiving similar notices.

The BBC reports further on the drill:

[…] The centres were asked to practise shutting down targeted web pages quickly and to report details of their owners to the police.

The BBC’s John Sudworth in Beijing says that over a two-and-a-half hour period the drill reportedly shut down a number of sites. [Source]

Coverage from the state-affiliated Global Times noted that the Ministry of Public Security required the data centers and cloud companies to hand over the identification and contact details associated with the randomly selected IP addresses and domains.

The testing of the “one-key shutdown” system comes amid Xi Jinping’s steady efforts to reinforce China’s Great Firewall system and bolster control of the domestic internet, which recently included the launch in January of a 14-month nationwide campaign to “clean-up” unauthorized internet connections. Since new regulations paved the way for a crackdown on VPNs, concerns have been rising that access to the global internet both for individuals and for foreign multinationals who rely on it for business, could be in jeopardy. Reporting on both the shutdown drill and the VPN crackdown, The New York Times’ Paul Mozur summarizes authorities’ increasing power to control internet access in China, and warns that this trend can be expected to continue:

One Beijing online video company watched as its app and website went offline for about 20 minutes without warning. The way it was disconnected — the digital tether that connected its service to the rest of the internet was severed — suggested more than a mere technical outage, according to the leader of the firm’s technology team, who requested anonymity for himself and the company for fear of reprisals.

Chinese officials did not comment on the test, and there was no indication that they would use the system again. But if they do, it may not be a total surprise.

[…] China has embarked on an internet campaign that signals a profound shift in the way it thinks of online censorship. For years, the China government appeared content to use methods that kept the majority of people from reading or using material it did not like, such as foreign news outlets, Facebook and Google. For the tech savvy or truly determined, experts say, China often tolerated a bit of wiggle room, leading to online users’ playing a cat-and-mouse game with censors for more than a decade.

China still has not clamped down to its full ability, the experts said, and in many cases the cat-and-mouse game continues. […] [Source]