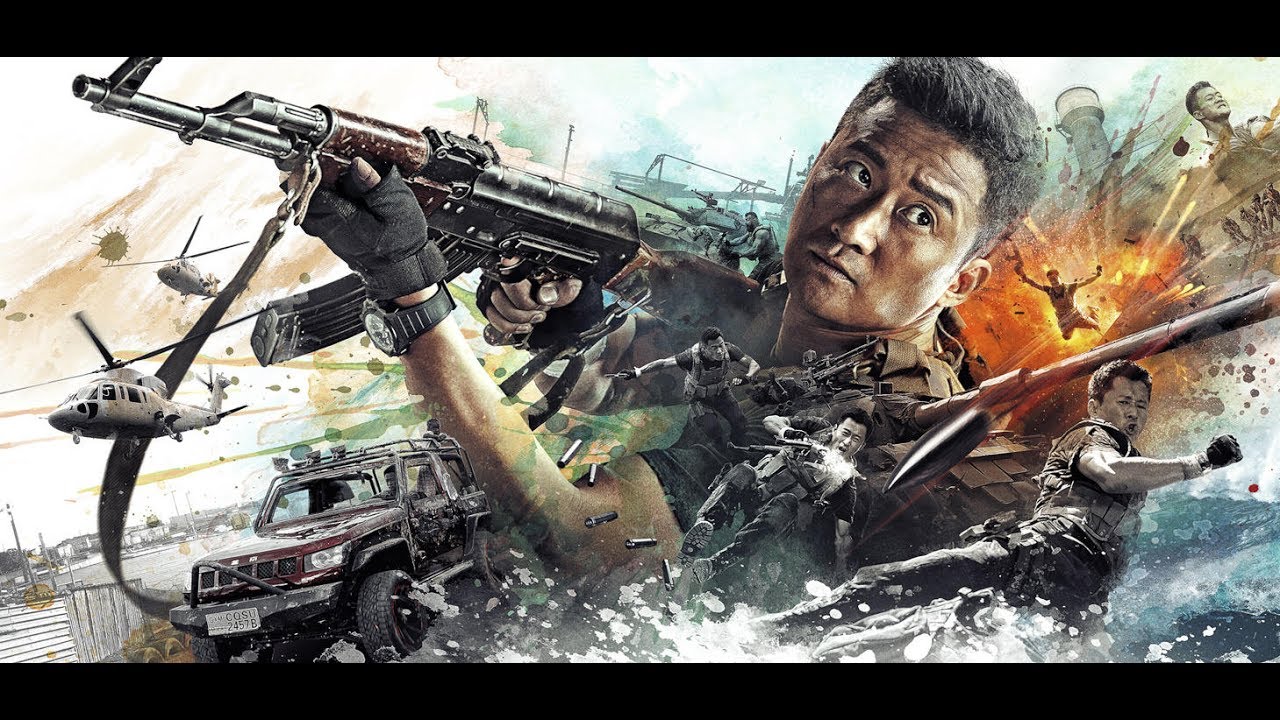 Nationalistic military action film “Wolf Warrior 2” (战狼2), co-written and directed by lead star Wu Jing, has become China’s highest-grossing box office hit ever, taking in 3.4 billion yuan in its first 12 days. The cinematic story of a Chinese special ops soldier who rescues Chinese citizens from Western mercenaries in a ravaged African war zone opened weeks after China began sending troops to its first overseas base in Djibouti, and days before China celebrated the 90th anniversary of the founding of the People’s Liberation Army with a huge military parade. The speech delivered by Xi Jinping after the parade at the Zhurihe military base in Inner Mongolia, in which he called on his troops to “extend the battleground to wherever the party points towards” and “defeat all enemies who dare to offend [China],” seems to resonate with Wolf Warrior’s tagline: “Anyone who offends China will be killed no matter how far the target is.” The BBC reports on “Wolf Warrior 2,” summarizing its plot and noting that the domestic fanfare may be partially related to a rise in patriotism in China:

Many moviegoers said online that they were touched by the patriotic plot.

“This movie is the best Chinese action movie,” one social media user wrote. “Shockingly good – hot blood and tough guys. I shed tears after watching it,” said another.

[…] The movie, which is entirely privately funded, has also been lauded for its attention to detail and reportedly features close replicas of many of the latest weapons and artillery used by the Chinese army.

[…] But timing has also contributed to its success, with the Chinese nation in the throes of a new wave of patriotism.

The film premiered just ahead of the 90th anniversary of the founding of the Chinese army, a hugely symbolic event for the country. […] [Source]

While the film’s success at home—currently the second largest market globally, after the U.S.—allowed it to become the top grossing movie globally on its opening weekend, it appears to be enjoying less support in foreign box offices, so far totaling just over $1 million in the U.S., making it the 7,293rd top grossing film there. At the South China Morning Post, Mandy Zuo reports that the military nationalism that appears to be driving the domestic success of “Wolf Warrior 2” may be the very reason for its lackluster opening performance in the U.S.:

[…T]he movie’s strongly patriotic tone, which made it such a runaway hit on the mainland, appears to be what is keeping Western audiences away.

Wu [Jing said at] a press conference in Guangzhou last week: “Patriotism has been hidden away inside the audience for a long time and this sentiment needs to be released through a film and a role.”

Lu Peng, a researcher specialising in film and culture at the Shanghai Academy of Social Sciences, said the main reason for the film’s success was it played to the Chinese public’s growing nationalist sentiment.

“Based on real-life news events in recent years, the story has found it easier to generate national pride than traditional propaganda films,” he said.

[…] The Western press have praised the film’s action sequences, but its unsubtle pro-China stance means it will never succeed with a mainstream Western audiences, he added. [Source]

Following the debut of “Wolf Warrior 2,” nationalistically-inclined Chinese tabloid Global Times cited patriotism as one reason for the surprising success of the movie:

Besides being an exciting action film, Wolf Warrior 2 is heavily patriotic, which may be another reason why is has caught the attention of so many Chinese moviegoers.

“‘Those who offend our Chinese nation will be punished no matter how far away they are,’ – This line from the film continues to linger in my mind,” netizen Tianxin posted on Douban.

[…] The end of the film shows the cover of a Chinese passport accompanied by a short message: “Citizens of the People’s Republic of China. When you encounter danger in a foreign land, do not give up! Please remember, at your back stands a strong motherland.”

According to a report on ent.sina.com, moviegoers who saw the film last Thursday in Shanghai were moved by this message. This message has also resonated among Chinese citizens living abroad. [Source]

However, nationalism and/or patriotism isn’t the only thing driving the film’s success. A follow-up article from the Qiu Zhibo at the Global Times, which attempts to reassure Western readers wary that the film signals an increasingly assertive and aggressive China, points out that the film is not “top-down didactic, patriotic propaganda by the government. On the contrary, it is a purely commercial movie, rather than a state-initiated propaganda movie.”

Indeed, “Wolf Warrior 2” far outshone the opening performance of state-sponsored propaganda film “The Founding of an Army,” which opened the same day. The latter film, the third in the “Founding of New China” trilogy, has so far grossed $63.6 million, compared to Wolf Warrior 2’s $4.71 billion (and counting, according to China Film Insider’s tally). On the eve of its release, China Film Insider’s Jonathan Papish reported on “The Founding of an Army,” the difficulty of judging the popular reaction to state-sponsored propaganda films, and on one tactic that filmmakers tried to help gather the film mass appeal:

The Founding of an Army (建军大业)

We say seemingly because it’s impossible to know how much of their box office totals came from actual paying customers. For these types of films, the government bulk buys tickets, dispatching work units to cinemas for required viewing, and institutes a per screening attendance quota that exhibitors must abide by.

This time, in an attempt to appeal to more mainstream Chinese filmgoers, China Film Company has recruited a huge cast of actors and actresses including just about every single “Little Fresh Meat” they could get their hands on. [Source]

At The New York Times, Amy Qin reports further on the heaps of “little fresh meat” (小鲜肉) that can be seen in “The Founding of an Army,” noting criticism of the casting choices:

[…W]hen it came time to find actors to play some of the Communist Party’s most venerated military commanders, the filmmakers behind “The Founding of an Army” made an unusual — some say disrespectful — casting decision: They piled on the “little fresh meat.”

Since the movie opened in the last week of July, at least one descendant of a figure portrayed in the film has taken to social media to criticize the filmmakers for what he called their “shameful” casting decisions.

“Someone is trying to make a fortune off these important historical events,” Ye Daying, a grandson of Ye Ting, a Communist military commander, wrote on Weibo, a microblogging site. [Source]