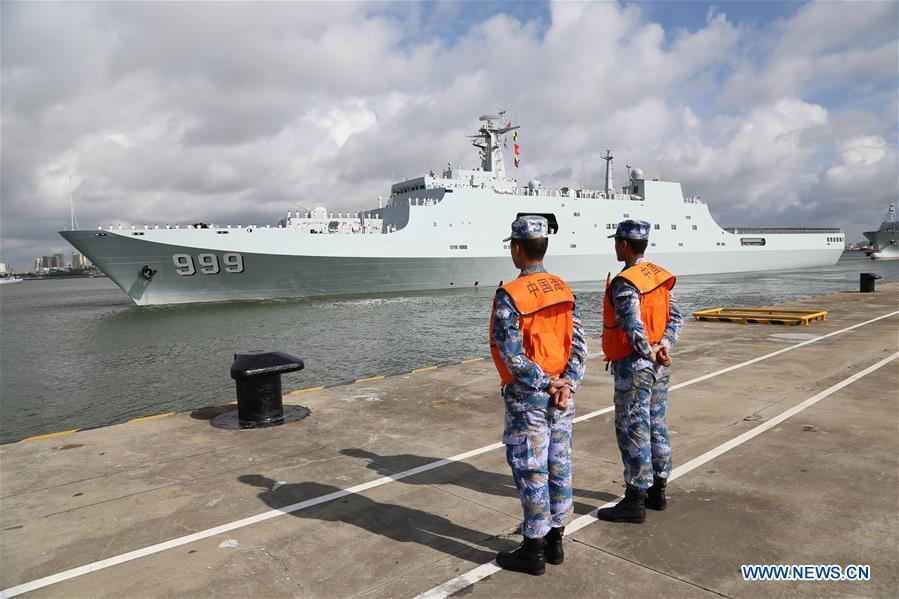 Beijing this week began dispatching personnel to the Horn of Africa to populate China’s first overseas military base, a naval outpost in Djibouti. The base, which was agreed upon in 2015 and has been under construction since last year, begins receiving troops as China has been investing heavily into African nations as part of a larger strategy to expand its global influence. China has also expressed interest in playing a more assertive role in the Middle East, and another Chinese military base is expected to come in Beijing’s longtime ally Pakistan (China has pledged nearly $60 billion in infrastructure investment as part of the China-Pakistan Economic Corridor—a project controversial for security, political, and humanitarian reasons). The Atlantic’s Krishnadev Calamur reports on the deployment, the regional context of relations with China, and the foreign military company that China will have in the nation:

China is already Africa’s largest-trading partner and in 2015, the government said it would invest $60 billion on infrastructure projects on the continent. Djibouti, which lies in the Horn of Africa, is a relatively stable nation and is also home to U.S. and French military bases.

[…] The Chinese push into Africa is part of a massive drive by Beijing to exert its influence in areas that it sees either as within its sphere of influence or capable of contributing to its rise. Recently, it embarked on the “One Belt, One Road” initiative in Asia, investing billions to develop regional trade routes. Beijing has also plowed massive investment into Latin America. But it’s Africa where Chinese investment has seen the most impact. Beijing has built railways, ports, and roads in exchange for raw materials that have powered its economic and, consequently, political rise. But Chinese investment in Africa and beyond have prompted many questions—not least of which is about China’s intent. […]

[…] The Chinese troop deployment to Djibouti is likely to be closely watched by the U.S., which maintains its largest permanent military base in Africa, Camp Lemonnier, in the country. Some 4,000 U.S. troops are stationed in the country. They will now have Chinese company. [Source]

In addition to U.S. and French bases, Djibouti is also home to Japanese, Spanish, and Italian bases, and Saudi Arabia has one under construction in the East African nation that has become a major strategic hub for the maintenance of Middle East security. In a list of the global implications of China’s base, the Times of India describes the strategic military significance of Djibouti, and describes China’s choice to open its first overseas base there in the context of its ambitious One Belt One Road initiative:

2. Positioned on the northwestern edge of the Indian Ocean, the naval base represents the “first pearl of a necklace” unfolding along the sea route that connects China to the Middle East. It has fuelled worries in India that it’s part of China’s strategy to encircle the Indian subcontinent (“the string of pearls”) with the help of military alliances and assets in Bangladesh, Myanmar and Sri Lanka.

3. Djibouti‘s status as a model of stability in an otherwise volatile region is one of its greatest assets. It lies on the Bab el-Mandeb Strait, a gateway to the Suez Canal, which is one of the world’s busiest shipping routes. The establishment of an active Chinese naval base would act as a deterrent to pirate attacks on the crucial trade routes between the Indian Ocean and the South China Sea.

4. Djibouti’s proximity to restive regions in Africa and the Middle East makes it significant for the location of bases for military superpowers. The crises in Somalia and Yemen have warranted international responses and the need for military bases nearby. Chinese nationals working on infrastructure projects in the region would also benefit from the proximity of a military base in the region. […] [Source]

Chinese state media coverage of its first overseas base abroad has been careful to portray the strictly logistical planned function of the new outpost. From Xinhua:

China on Wednesday said the establishment of a Chinese People’s Liberation Army (PLA) support base in Djibouti is a decision made by the two countries after friendly negotiations and will be conducive to China’s performance of international obligations.

Foreign Ministry spokesperson Geng Shuang made the remarks at a daily press briefing.

He said that in accordance with UN Security Council resolutions, China has deployed vessels to the Gulf of Aden and the waters off the Somali coast on escort missions since 2008. During the process of escorting, Chinese officers and men encountered difficulties in replenishing food and fuel, and Djibouti offered logistical support in multiple instances.

Geng said the support base will better serve Chinese troops when they escort ships in the Gulf of Aden and the waters off the Somali coast, perform humanitarian rescue, and carry out other international obligations.

Moreover, the base will be conducive to driving Djibouti’s economic and social development, and assist China’s contribution to peace and stability both in Africa and worldwide. [Source]

In an interview with China expert Brent Berger, Deutsche Welle asked about Beijing’s focus on the logistical functioning of this base:

As evident in Chinese media, President Xi Jinping’s government refrains from calling the Djibouti infrastructure a “military base;” it rather uses the term “support base.” Why so?

Beijing wants to avoid any strategic connotations that would hint at any kind of projection of military might in the region. This is understandable for two reasons. First, this is not the primary purpose of the installation. The base is intended for the logistics of already existing operations in the region. This concerns counter-piracy, peace operations and evacuation operations. Second, since the Iran nuclear deal, China has been increasingly drawn into regional affairs and rivalries in the Middle East. It has no intention to send the wrong signals about becoming a regional status-quo power or taking any sides.

Of course, the possibility cannot be ruled out that the Chinese military is using the base for surveillance.

No matter what wording China officially uses, there is one message that Beijing cannot avoid: Chinese military presence and interests are global and they will manifest in bases such as this one. Joint military exercises such as those that China has been holding with Russia since 2015 in the Mediterranean Sea raise eyebrows. [Source]

At VICE, David Gilbert recalls objections to it previously raised by the U.S. and India, and notes state-affiliated tabloid Global Times’ commentary, which deviated from the official narrative:

Djibouti’s location, on the Horn of Africa, and its relative stability are key. While wars and unrest have dogged other nations in the region — such as Ethiopia, South Sudan, and Eritrea — Djibouti (population under 1 million) is seen as a model of stability.

It is located just 32 km from the war-torn country of Yemen, and is seen as a perfect staging post for operations in the rest of the Middle East. The country is also important from a commercial point of view. Thanks to its proximity to the Mandeb Strait – which gives access to the trade route along the Suez Canal – it provides a vital port to landlocked countries like Ethiopia.

[…] When China announced plans to build a base in Djibouti in 2015, some U.S. lawmakers urged the Obama administration to try and dissuade Djibouti from allowing the base to go ahead. In India, the location of the base has raised fears that it will become another link in China’s “string of pearls” of military alliances ringing the subcontinent, including Bangladesh, Myanmar, and Sri Lanka.

[… Despite the Chinese Foreign Ministry’s insistence that the base in Djibouti is purely logistical,] in an editorial Wednesday, the state-run Global Times said: “There could be no mistake that this was in fact a military base. Certainly this is the People’s Liberation Army’s first overseas base and we will base troops there. It’s not a commercial resupply point. It makes sense there is attention on this from foreign public opinion.” [Source]

CNN’s Brad Lendon and Steve George report on other recent Chinese military engagement with Africa, and quote experts on the strategic significance of a base in Djibouti:

China has expanded its military ties across Africa in recent years. According to a report by the European Council on Foreign Relations (ECFR), cooperation with Africa on peace and security is now an “explicit part of Beijing’s foreign policy.”

In 2015 Chinese President Xi Jinping committed 8,000 troops to the UN peacekeeping standby force — one fifth of the 40,000 total troops committed by 50 nations — China also pledged $100 million to the African Union standby force and $1 billion to establish the UN Peace and Development Trust Fund.

More than 2,500 Chinese combat-ready soldiers and police officers are now deployed in blue-helmet missions across the African continent, with the largest deployments in South Sudan (1,051), Liberia (666), and Mali (402), according to the ECFR.

[…] Edward Paice, director of the London-based Africa Research Institute, said a base in Djibouti makes a lot of sense for China, just as it does for Japan or the US.

“It (China) has cited its desire to play a greater role in peacekeeping, and it has combat troops in both South Sudan and Mali. It’s logical that it needs an actual base somewhere in Africa, which is really no different from the Americans saying that they need Camp Lemonnier as a headquarters for operations in Africa, whether in peacekeeping or counterterror or whatever,” Paice said on The Cipher Brief website. [Source]