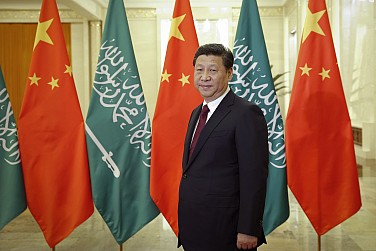 At the South China Morning Post, Kristin Huang reports that some Chinese foreign policy experts are urging Beijing to strengthen its military role in the Middle East in effort to protect its expanding interests in the turbulent geopolitical region. China has long been dedicated to non-interference, but recent moves—such as the August 14 signing of military aid and training deal with Syria, the recent announcement from China’s defense ministry of willingness to strengthen military relations with Saudi Arabia, or the ongoing construction of China’s first overseas military base in Djibouti—suggest that Beijing is increasingly willing to bend that policy in its dealings with the region.

Until recently, Beijing’s foreign policy in the Middle East has been overwhelmingly concerned with building relationships with governments while avoiding any overt demonstrations of influence. But that reluctance is fading.

[…] Observers said the stepped up engagement in the region reflected Beijing’s increasing eagerness to take a stake in global affairs and ensure its construction projects or other investments remained protected in conflict zones.

[…] Chinese residents living in the region say security risks are always a concern for them and Beijing should take stronger steps to ensure their safety. “Although we received anti-terrorism training before coming here, we are really afraid of unexpected conflicts,” said Cai Guoxin, an engineer at China Huanqiu Contracting and Engineering Corporation in Saudi Arabia. “What if someone rushes into our building and takes us hostage?”

[…] “To shore up protection of overseas Chinese interests, Beijing needs to drop such an obsolete mindset as refusing to send any troops to foreign countries or interfering with other countries internal affairs,” said Li Jie, a Beijing-based military expert. […] [Source]

At The National Interest, security analysts Michael Clark and Raffaello Pantucci outline China’s substantially increased engagement with Syria, identifying two major reasons for the tactical change: concern that militant Uyghur organization the Turkestan Islamic Party (TIP, successor of the East Turkestan Islamic Movement) is playing a role in the Syrian conflict, and protection of Xi Jinping’s embattled “One Belt, One Road” initiative to increase security and economic engagement with the Middle East and Central Asia:

[…] Chinese suppression in Xinjiang, especially after the interethnic riots and violence in the capital, Urumqi, in July 2009, has resulted in the development of what Chinese state media has dubbed an “underground railway” of Uighurs seeking to flee the region. Some of those have ultimately found their way to Turkey and onward to Syria to fight with TIP and other jihadist groups. By 2015, TIP had established a well-documented presence on the battlefield in Syria, with the group releasing a number of videos detailing its combat role fighting alongside Jabhat al-Nusra, until recently Al Qaeda’s affiliate in Syria. (TIP does not fight alongside ISIS; its leadership has released statements in which it condemns ISIS’s activities.) TIP is increasingly showing itself to be an effective force, participating in many major fights (including the breaking of the Aleppo siege) and showing off its skill, manpower and equipment.

Historically, China has not had much economic interest in Syria, a country that prior to the civil war was more closely linked economically to its region, Iran and Russia. And more recently, China has continued to play a second-tier role. While it has had numbers of nationals join ISIS, others kidnapped and killed by the group, and the group has threatened it in some of its rhetoric, it does not appear to be much of a focus for the group. On the non-ISIS side fighting the regime, the numbers fighting alongside TIP seem to be quite substantial, whilst the group’s leadership and a core of the group continues to fight in Afghanistan. And, according to Kyrgyz authorities, this connection may have now matured into the attack that took place in late August against the Chinese embassy in Bishkek. [See prior CDT coverage of the Bishkek attack and Beijing’s vow to “strike back” against the TIP/ETIM][…] [Source]

Last week at the AP, Gerry Shih reported on how the rise of Uyghur militancy is affecting China’s domestic and foreign security posturing, including context on rising Uyghur grievances amid an ongoing anti-terror campaign that has included many controversial policies targeting Uyghurs in their native Xinjiang:

“China’s calculus is shifting because the threat picture is shifting from one in which only the Americans and Europeans were targets,” said Raffaello Pantucci, director of international security studies at the Royal United Services Institute, a British think tank. “That’s why you’re seeing Beijing push out. It’s a combination of the new Chinese foreign policy assertiveness but also a real concern about what’s happening on the ground.”

[…] China has made similar moves closer to home. This year, it pledged equipment and counterterrorism training for Afghan police with the aim of containing ETIM. It has also expanded its role as a mediator, welcoming both President Ashraf Ghani and Taliban representatives to China on visits and brokering low-level talks between the sides.

[…] China has been sensitive to international criticism of its policies in Xinjiang while casting itself as a target of terrorism similar to Western countries. It has successfully lobbied the United States, the European Union, Russia, Britain and other governments to recognize the Turkistan Islamic Party as a terrorist organization.

[…] Chinese anti-terrorism expert Li Wei said the extremist threats that China faces domestically and from abroad are now “inextricably linked, just like with other countries,” leading China to expand its dealings in Syria and Afghanistan. […] [Source]