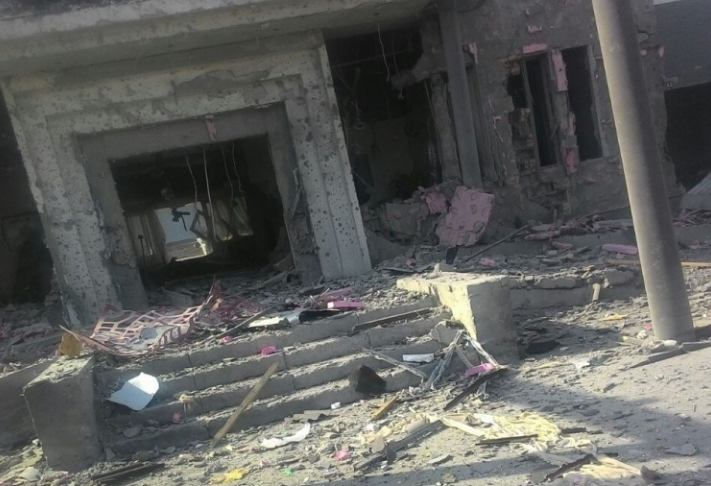 The Chinese embassy in Bishkek, Kyrgyzstan was attacked on Tuesday when a car armed with an explosive device crashed through the embassy gates and detonated. The bomber died after the blast, and at least three embassy employees were injured. Reuters’ Olga Dzyubenko reports:

Officials from both countries described the assault as a terrorist act, and Kyrgyz President Almazbek Atambayev ordered the government to take extra counter-terrorism measures in the capital and regions, his office said in statement.

China condemned the attack and urged Kyrgyz authorities to “quickly investigate and determine the real situation behind the incident.

[…] A Kyrgyz Interior Ministry spokesman said the car exploded inside the compound. Police cordoned off the embassy and adjacent area, and the GKNB state security service were investigating the bombing that occurred at about 10:00 a.m. (0400 GMT).

In a press conference in Beijing, foreign ministry spokesperson Hua Chunying condemned the “extreme violent act” and urged an investigation, but stopped short of labeling it an act of terrorism. The foreign ministry has since called the incident a “terrorist attack,” according to Reuters.

Kyrgyzstan borders China’s Xinjiang region, the frontline of a “war on terror” launched by Beijing in 2014 in response to an upswing in violence in the region and elsewhere in China. Violence has been blamed by authorities on “Xinjiang separatists” and “religious extremists” from Xinjiang, though some critics see policies targeting ethnic Uyghur culture and religious observance as a factor exacerbating deep-seated ethnic tensions and driving some Uyghurs to violence. (Beijing has replied to accusations of religious persecution in Xinjiang by lauding the successes of the terror crackdown and insisting that religious freedom abounds in the region.) At The Guardian, Tom Phillips reports on the attack, quoting an expert on the likely target of blame and the significance that a proven link to Uyghur militants would hold:

[…] Blame for Tuesday’s attack is likely to fall on militants from the Uighur ethnic minority who are waging what some describe as a low intensity insurgence against Chinese rule across the border in the Chinese region of Xinjiang.

Raffaello Pantucci, the director of international security studies at the Royal United Services Institute, said Kyrgyzstan had a large Uighur community and that Uighur militants were the “obvious candidates” for the bombing. “It certainly would stack up in many ways,” he said.

Pantucci, a Xinjiang expert, said the attack appeared to have specifically targeted the Chinese embassy, which is in an isolated compound outside the centre of Bishkek. “The Chinese embassy isn’t exactly in the heart of town,” he pointed out.

“You are dealing with a problem that is metastasising negatively in a way that is really quite worrying.” [Source]

Beijing has long alleged a link between violence in Xinjiang and the global jihad movement, and a report from a U.S.-based think tank last month claimed that over 100 Uyghurs joined the Islamic State between 2013 and 2014. The East Turkestan Islamic Movement (ETIM), a Uyghur separatist organization, has been regularly accused by Beijing of inciting unrest, and the organization has laid claim to several attacks in China in recent years. However, foreign experts and activists have disputed the validity of ETIM claims, and questioned whether the organization is as cohesive as Beijing asserts. ETIM was recently added to Britain’s official list of terrorist organizations.

The New York Times’ Ivan Nechepurenko reports that Kyrgyz authorities’ initial investigation is believed to have identified the perpetrator as a Uyghur, and also reports on an earlier run-in between alleged Uyghur militants and Kyrgyz border guards:

The state security service in Kyrgyzstan has begun an investigation, in an effort to identify the bomber. According to preliminary data, he was a Uighur, a Turkic ethnic group, living in Eastern and Central Asia, the local news website K-News reported.

[…] In 2014, border guards in Kyrgyzstan killed 11 people believed to be from a Uighur militant group that had illegally crossed the border from China. [Source]

At the South China Morning Post, Catherine Wong summarizes the strategic economic and security significance that Beijing puts on Kyrgyzstan, due largely to its proximity to Xinjiang, its modest population of Uyghurs, and its partnership in Xi’s “One Belt, One Road” regional strategy:

Not only Kyrgyzstan, but other nations in Central Asia are important to China because they border the restive region of Xinjiang (新疆), which has seen periodic ethnic clashes involving China’s Uygur minority. The last thing Beijing wants is Central Asia becoming a base for extremists, who could then sneak into Xinjiang to plot attacks.

[…] China’s Xinjiang region and Kyrgyzstan share a border, and ethnic Uygurs, Kyrgyz and other minorities live on both sides.

During a visit in 2013, President Xi Jinping (習近平) said that China and Kyrgyzstan would work together to combat “three evil forces” – a reference to terrorism, extremism and separatism in Xinjiang.

[…] According to official Kyrgyz statistics, an estimated 50,000 Uygurs live in Kyrgyzstan, although some Uygur groups put the number as high as 250,000, according to Radio Free Asia. [Source]

Coverage from the Financial Times’ Peter Wells notes the bombing is “likely to worry Beijing as it steps up investments in Central Asia under its ‘One Belt One Road’ initiative.” The OBOR, Xi’s grand central Asian economic engagement strategy, faces security concerns in Pakistan as well. The plan, which Xi has been promoting for over three years, has recently lost steam due to economic, security, and political concerns.