Beijing Vows to Strike Back After Kyrgyzstan Attack 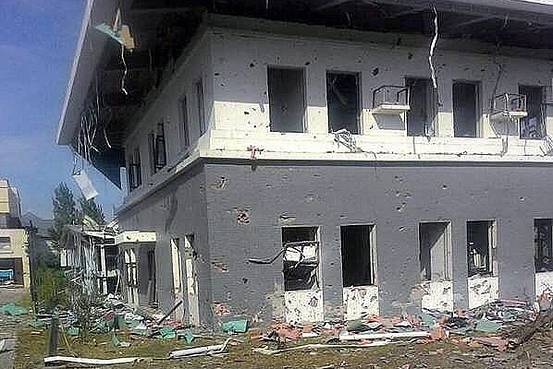 The Chinese embassy in Kyrgyzstan was attacked on August 30, when a car armed with explosives crashed the building’s gate and detonated. Early reports on the incident noted that Kyrgyz officials believed the perpetrator to be a Uyghur, the ethnic minority native to China’s Xinjiang region, where Beijing’s ongoing crackdown on terrorism has included policies targeting Uyghurs’ cultural expression and Islamic practice. At Reuters, Olga Dzyubenko reports that Kyrgyz state security has now confirmed that the suicide bomber was a militant Uyghur:

A suicide bomb attack on the Chinese embassy in the Kyrgyz capital last week was ordered by Uighur militants active in Syria and carried out by a member of the East Turkestan Islamic Movement, Kyrgyzstan’s state security service said on Tuesday.

The suicide bomber, whose car rammed the gates of the embassy on Aug. 30, was an ethnic Uighur who held a Tajik passport in the name of Zoir Khalilov, the GKNB security service said in a statement.

[…] The attack on the Chinese embassy was coordinated through a native of Kyrgyzstan living in Turkey, the Kyrgyz secret service said. […] [Source]

Beijing has long blamed the North Waziristan-based East Turkestan Islamic Movement (also known as the Turkestan Islamic Party) for inciting unrest and violence in China, and the ETIM has taken credit for several attacks in China in recent years. Foreign experts and activists, however, have questioned the validity of ETIM claims and Beijing’s assertions about the group’s cohesion.

At The Wall Street Journal, Te-ping Chen reports on statements from a Chinese Foreign Ministry spokesperson, who said at a press briefing that Beijing was aiding in the investigation, and vowed to “firmly strike” against the ETIM:

“They have blood all over their hands,” said Ms. Hua [Chunying], referring to ETIM generally and not the embassy attack in particular. “We will firmly strike against them and safeguard the safety of the Chinese people in foreign countries.”

[…] The latest suicide attack gives China more ammunition in its appeals for aid in fighting terrorism. In recent years, Beijing has said growing numbers of Uighurs have been receiving training as militants in the Central Asia and the Middle East. However, Western governments, including the U.S., have hesitated to cooperate with China in the past on counterterrorism, given concerns about repression and human rights in Xinjiang consistently raised by Uighur groups and foreign nonprofit groups. [Source]

Read more on Beijing’s repeated claims that Xinjiang violence is linked to the global jihad movement, including a recent U.S.-based think tank’s report stating that more than 100 Uyghurs joined the Islamic State between 2013 and 2014, via CDT.