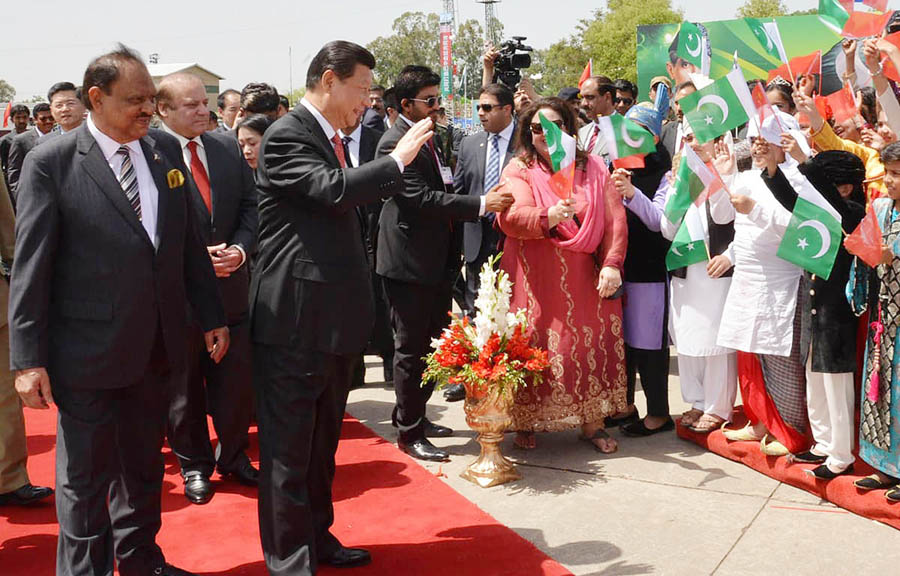 A recent report released by the Pentagon indicates that China is likely seeking to establish a military base in Pakistan, a country with which it has a longstanding friendly relationship. Wajahat Khan at NBC News report:

The Pentagon didn’t provide a time frame for such a move. However, a senior Pakistani diplomat confirmed to NBC News that his country invited China to build a naval facility on its territory back in 2011.

Speaking on the condition of anonymity, the diplomat said this request came just days after U.S. Navy SEALs conducted a secret raid to kill Osama bin Laden in the Pakistani city of Abbottabad, when relations between Washington and Islamabad took a nosedive.

Despite the reports, China’s Foreign Ministry Spokesperson Hua Chunying dismissed the idea of a Chinese base in Pakistan as “conjecture” and “irresponsible remarks.”

But Western experts and Pakistani officials see it as a distinct possibility. [Source]

Pakistan’s partnership with China goes beyond the possibility of hosting Chinese military. The South Asian country is expected to play a key role in China’s One Belt, One Road initiative, a mammoth transcontinental infrastructure project whose name is inspired by the ancient Silk Road and maritime trading routes. The China Pakistan Economic Corridor  (CPEC), in which China has pledged nearly $60 billion in infrastructure investments, is set to bring modern transportation networks, energy projects, as well as special economic zones to Pakistan. While many in Pakistan have praised the potential benefits of the project, others have remained skeptical of the security and rights risks that are involved. A leaked document on the long-term plan of the CPEC did little to ease concerns over the project’s impact on Pakistan’s economy, political environment, and society. The situation was further complicated this week after Pakistan issued a new anti-dumping ruling against Chinese steel products. The steel investigation led to additional speculations about the motive behind China’s economic diplomacy.  At The News, S Akbar Zaidi looks at the various concerns surrounding CPEC:

It is clear that as a result of CPEC, some sort of transformation of Pakistan, is underway. It also seems more than certain that this is a Chinese project, rather than a Pakistani one, and the benefits will be far in the favour of Chinese investments than Pakistani ones, and Pakistanis will be merely externalities to the large project and its investments. Clearly, Pakistan will also benefit, especially once the power production and infrastructure come on line, but most of the benefits are heavily loaded in favour of the Chinese.

Pakistan has been subservient to the Chinese in its appeasement of Chinese interests around CPEC, although, perhaps, this is nothing new in terms of Pakistan’s history and political economy. From the influence of American imperialism for most of its existence, Pakistan gave way to Saudi intrusion in domestic, cultural and social affairs, and now has prostrated itself in front of Chinese imperial designs.

CPEC is a Chinese project, for Chinese interests, and Pakistan just happens to be part of the geographical terrain. Ironic it is, then, that having fought a war against one formally communist regime to stop it gaining access to warm waters, another former communist regime is granted huge easy concessions for the same access.

This is not to deny that Pakistan too, will benefit from Chinese investments, and ‘Estimates from the Pakistan Business Council suggest the projects could account for 20 per cent of the country’s GDP over the next five years and boost growth by about 3 percentage points’.Yet, many observers caution Pakistan after how Chinese terms and investments turned sour in Sri Lanka, Tajikistan and in many parts of Africa. [Source]

Another critique of CPEC revolves around the question of whether the trade route would be viable in the country’s violence-prone areas, such as the province of Balochistan where there has been an ongoing insurgency. The CPEC project is a primary target in Balochistan because local separatists view it as a threat to the Baloch people. Ensuring security in these areas has been one of the biggest challenges to the success of CPEC. Last month, two Chinese nationals were kidnapped in Balochistan and later confirmed to have been killed. The incident prompted Pakistan to enhance security around Chinese citizens residing in the country. The deaths also led to widespread calls for revenge among Chinese internet users, with netizens demanding the Chinese government to send troops to Pakistan for retribution. Coco Liu at South China Morning Post reports:

On Sina Weibo, a popular Chinese social media platform with more than 340 million monthly active users, anger towards the killing – and Beijing’s lack of response – is running high.

“How much blood do we still have to spill until the government is willing to take action?” wrote a Weibo user going by the name ‘No.1 School Guard Deng Dabao’. The comment was liked by some 80 users.

[…] But experts say the death of the two Chinese nationals is unlikely to become a turning point in foreign policy. “Will Beijing follow the request of Chinese social media users and send troops abroad? No, of course not,” said Wu Xinbo, a professor of the Institute of International Studies at Shanghai-based Fudan University.

Wu said China had not signed any agreements with nations in terms of building military bases on foreign soils, making it hard to send troops abroad. Besides, principles such as “non-interference in each other’s internal affairs” had served as the foundation of Chinese foreign policy for decades, and Chinese leaders were far from ready to revise them, he said. [Source]

Some reports claim that the couple were not teachers as previously reported but missionaries who were preaching illegally in Pakistan before they were abducted. Nasir Jamal at Pakistani newspaper Dawn writes that the pair were sent by a South Korean agency to promote Christianity in Pakistan.

Both Lee and Meng were part of a group of 13 Chinese men and women brought to Pakistan between November last year and January this year by a Korean, Juan Won Seo, ostensibly to learn Urdu and then teach the language to the other Chinese expected to arrive here in future.

Juan had come to Quetta in 2011 and claimed to be co-owner of a firm, ARK Info Tech, registered with the Securities and Exchange Commission of Pakistan (SECP) besides running an Urdu-language centre. His wife had told a neighbour a few days before the kidnappings that she worked as a physiotherapist. His business partner, another Korean national, also lived nearby.

Two policemen stand guard outside Juan’s place after he and his family were taken into custody by the Federal Investigation Agency on June 12, apparently for investigation by intelligence agencies and possible deportation.

Investigators believe that Juan — as well as the Chinese nationals — had violated the terms of their visas as they were involved in preaching Christianity.

Elsewhere, Sutirtho Patranobis at Hindustan Times reports that China will link CPEC with another corridor involving India, Bangladesh, and Myanmar.

Part of the plan is to link the South China Sea to the Indian Ocean, according to the “Vision for Maritime Cooperation under the Belt and Road Initiative”.

New Delhi has repeatedly objected to the CPEC because of “sovereignty issues” as it passes through Pakistan-occupied Kashmir (PoK). This was the primary reason why it boycotted the high-profile Belt and Road Forum held in Beijing last month.

Though India is part of BCIM-EC, progress on developing that corridor has been slow, partly because of New Delhi’s security concerns.

The document did not share details on how the land corridors, such as CPEC and BCIM-EC, will be linked to the ocean but it was a clear indication of China’s long-term plan. [Source]