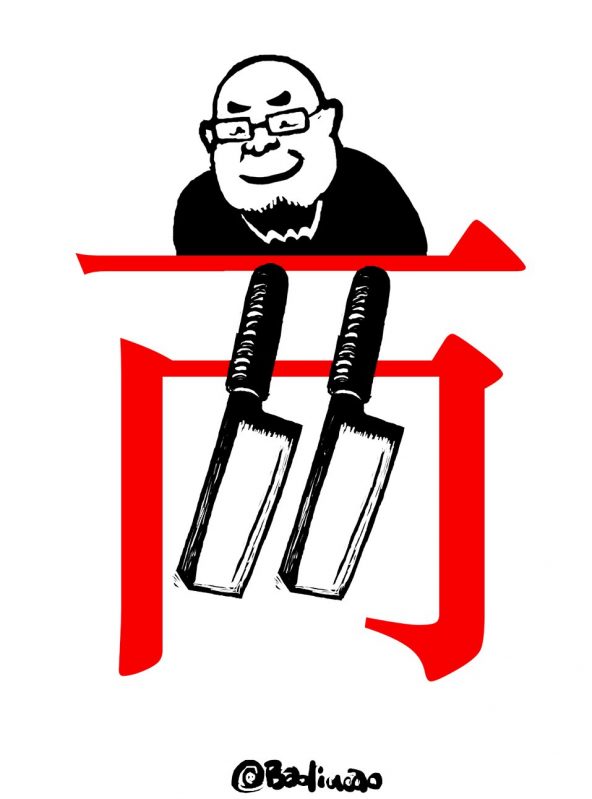 Activist Wu Gan, also known as Super Vulgar Butcher, stood trial for subversion in Tianjin on Monday. Wu was detained and pilloried in state media in May 2015 in a precursor to that July’s "Black Friday" or "709" crackdown on rights lawyers and activists, including many from the Beijing Fengrui law firm where he worked. Though detained before most, he is among the last of those prosecuted to be tried. From Philip Wen and Christian Shepherd at Reuters:

In a brief statement published on its official Weibo account on Monday afternoon, the Tianjin No.2 Intermediate People’s Court said it did not hold an open hearing because Wu’s case impinged on "state secrets".

"The defendant Wu Gan recognized his behavior violated criminal law and constituted a crime," the court said, adding that his lawyers were allowed to "fully express" their defense arguments.

The court said a verdict would be handed down at an unspecified later date.

Wu’s lawyer, Ge Yongxi, said it was "inconvenient" to talk about the case when reached by telephone. [Source]

The BBC’s John Sudworth described some of the confrontational activism which had landed Wu in trouble:

He rallied public opinion through online campaigns and brought pressure to bear on local officials by staging protests or even performance art, often bawdy acts of mockery designed to shame and humiliate.

He once photo-shopped the faces of three Henan province officials onto pigs, and posted the pictures on social media with the caption: "World’s Most Wanted; three fat pigs."

He stuck the image of a female official’s face onto a naked mannequin and announced that he intended to live-stream video footage of himself sleeping with her every day.

[…] However vulgar, the point was – as always – to harness public attention to a cause.

And to that end he can claim to have had a hand in some rare and notable successes. [Source]

Wu’s reported acknowledgement of his crimes contrasts with his defiant tone in a pre-trial statement released through his lawyers and translated last week at China Change:

Their accusations against me are now public knowledge. I’ve done nothing more than make some speeches, write three books, give moral support and assistance to innocent victims of injustice, expose the misconduct and criminal actions of the government and officials, and express my ideas through performance art. All this is simply exercising my legitimate rights as a citizen. These civil rights should be defended by all of us.

I will be convicted not because I am really guilty, but because of my refusal to accept a state-designated lawyer, plead guilty, and make a televised confession for their propaganda purposes, and my resolution to reveal their brutal torture of me and the procuratorates’ misconduct. The special investigative team told me that my case would be decided by leadership on higher level, and that my trial is just a ritual carried out by the procuratorate and court. Although I know that this trial is only a farce to declare me guilty, I will not speak in my defense. An innocent person does not need to defend himself.

[…] Under the brutal rule of the “Great, Glorious, and Correct” Communist Party of China, it would be embarrassing if I wasn’t framed as a “criminal.” Life is short, so we’d better “commit our crimes” while we’ve still got the chance. My crime of subverting the Communist regime is a great honor for me. In fighting for democracy and freedom and in defense of civil rights, a guilty verdict issued by a dictatorial regime is a golden glittering trophy awarded to warriors for liberty and democracy.

I refuse to speak in defense of myself, but I take this opportunity to thank you for the award! Thank you! [Source]

For more on Wu from China Change, see a 2015 profile by Yaqiu Wang; details of his 12 alleged crimes, "(which to everyone else read like a list of heroic deeds)"; and his recent tribute to Liu Xiaobo which contains details of his own detention and mistreatment, including torturous stress positions and medical intimidation. Several others held in connection with the Black Friday crackdown have reported similar abuse. (One, lawyer Xie Yang, later retracted his claims under suspected duress.)

On his personal blog, NYU legal scholar Jerome Cohen wrote that Wu’s pre-trial statement "ranks with those of China’s greatest martyrs to the cause of democracy, human rights and a genuine rule of law, including the late Liu Xiaobo":

Wu Gan’s pre-trial statement is surely one of the most moving and accurate descriptions I have read of the Chinese government’s manipulation of its legal system to stamp out freedoms of expression. This account of his personal experience encapsulates virtually all the abuses that the Xi Jinping regime has been committing against human rights activists and their courageous lawyers. It is tragic testimony to the pathetic attempts of the Communist Party to drape its oppression in the mantle of “law”. To me the saddest aspects are its reminder of the forced collaboration of China’s judges with its police, prosecutors and Party legal officials in suppressing the constitutionally-prescribed rights and freedoms of the Chinese people. [Source]

Amnesty International responded to news of the trial:

“Wu Gan’s trial is a cruel farce and it is inconceivable that he will receive a fair hearing in what is a politically motivated prosecution. He is merely being punished for refusing to stop his innovative and legitimate campaigns for justice in China,” said Patrick Poon, China Researcher at Amnesty International.

“The authorities’ decision to hold the trial behind closed-doors appears to be a calculated and shameless attempt to avoid scrutiny of the gross injustice they are inflicting on Wu Gan.” [Source]

Frances Eve, a Hong Kong-based researcher at the Network of Chinese Human Rights Defenders, said Wu was “being persecuted for his protected freedoms of speech and peaceful assembly”.

“His case has been rife with abuses, including torture, denial of legal counsel, and prolonged pretrial detention,” she said.

“He should be immediately and unconditionally released, and by going along with this sham trial, the Tianjin No 2 intermediate court is complicit in the human rights violations committed against him.” [Source]