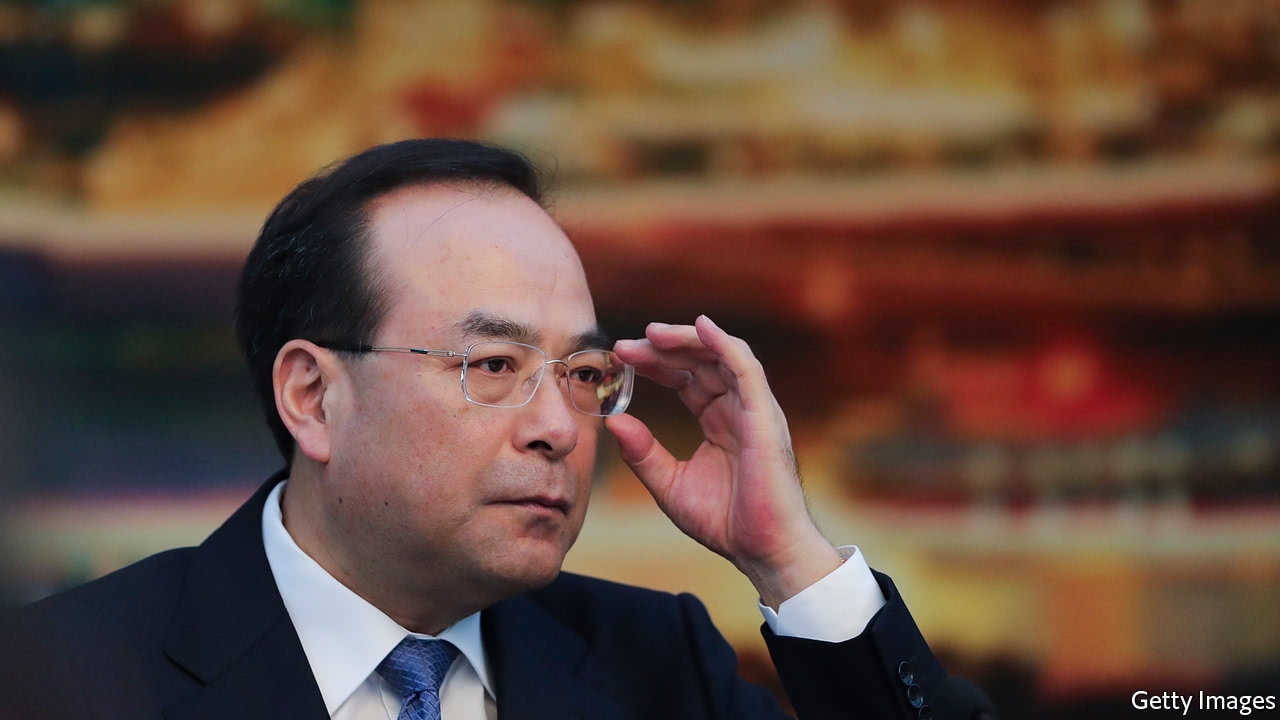 The former Chongqing Party Secretary Sun Zhengcai has been stripped of his official titles and expelled from the Communist Party, awaiting prosecution. Sun, who was a member of the ruling Politburo and once seen as a front runner in the succession race, was abruptly dismissed from his post in July and placed under investigation for violating party rules. Nectar Gan at South China Morning Post reports:

Xinhua reported that he had been stripped of all official titles, meaning the former high-flying politician had been removed from the 25-member Politburo, the party’s powerful decision-making body.

The report said Sun had been handed over to judicial authorities for further investigation, meaning he faced criminal prosecution.

Xinhua also reported that the investigation uncovered other evidence of Sun’s alleged crimes, suggesting the probe was not over and more developments were to come.

Sun’s expulsion was decided by the Politburo on Friday when it reviewed the Central Commission for Discipline Inspection’s investigation report on the former Chongqing boss.

Sun’s investigation has implicated other top officials in Chongqing and several of the city’s delegates have been rejected from attending the upcoming 19th Party Congress in Beijing, according to a report by Choi Chi-yuk in South China Morning Post:

Already, the party’s central leadership has rejected 14 out of 43 delegates proposed by the Chongqing authorities in May to take part in the 19th National Congress that starts on October 18. Their names were missing from the latest shortlist of delegates issued by Xinhua on Friday.
[…] It is unusual for a major region like Chongqing to lose one-third of its delegates just weeks before a party congress.

“Sun has offered [the graft investigators] detailed information about the wrongdoings of his subordinates since he was taken in,” a source familiar with the matter said, adding that the former Politburo member was hoping to get a more lenient sentence by reporting others.

“Five Standing Committee members of Chongqing’s party organisation and eight prefectural level officials have been questioned as a result,” the source said. [Source]

Five years ago, in the run-up to the 18th Party Congress, Bo Xilai was removed as Party Secretary of Chongqing and later sentenced to life in prison on charges of bribery, embezzlement, and abuse of power.
Sun is among the most senior members of the Communist Party to be caught in President Xi Jinping’s ongoing anti-corruption crackdown, a campaign that targets “tigers” and “flies” – top leaders and lowly bureaucrats – both at home and abroad. To facilitate the increasingly international scope of the country’s anti-corruption drive, Beijing is planning to restructure the Central Commission for Discipline Inspection and turn the agency into a more independent institution that is better equipped to cooperate with international law enforcements. From Kirsty Needham at The Sydney Morning Herald:

The Chinese government will form a new anti-corruption agency as it seeks greater cooperation from international law enforcement bodies that have been reluctant to deal with the feared Central Commission for Discipline Inspection.

The CCDI is a Communist Party internal discipline body that was formed when the party took power in China in 1949.

[…] It is expected that a national law to establish the National Supervisory Commission will be approved by the 19th National People’s Congress, the five-yearly meeting of the Communist Party leadership, to be held on October 18.

The new body would sit above the CCDI, and in theory be able to more easily work with international law enforcement agencies, because it is not viewed as a political discipline body, sources said. [Source]

Stratfor has more on the specific institutional challenges currently facing the CCDI:

While the CCDI is theoretically independent from the Party’s executive institutions, they still largely designate its function and work. To appease growing public resentment over rampant corruption among public officials, the government even empowered the commission over the past decade. Moreover, the CCDI chief has been a customary member of the Politburo Standing Committee since 1997, with the prominence of the position elevated further under Chinese President Xi Jinping’s sweeping anti-corruption campaign over the past five years.

Still, the lack of a legitimate law enforcement mechanism has created several challenges for the bureau, as well as the legitimacy of the anti-corruption campaign. For over 20 years, the CCDI has vacillated between having too little power, lacking the necessary authority to undertake anti-corruption practices, to having too much power that can meddle with China’s legal system. Those issues only become more apparent as the bureau’s power has expanded.

For example, in executing its inspection and enforcement role in the anti-corruption campaign, the CCDI operated throughout the Party’s and state’s institutions. Supervising the commission’s 500,000-plus corruption investigators became a serious problem, especially when it was repeatedly revealed that local investigators were corrupt themselves, undermining the reputation of the CCDI in the process. Numerous attempts to make the commission more independent — with past efforts focused on separating the commission’s operation from the Party — have failed. The commission’s unlawful enforcement mechanisms in the past and strong affiliation to the Party have hurt its legitimacy, too, limiting the scope of cooperation Beijing had sought for its overseas probes. [Source]

Sun’s downfall came just weeks before the 19th Party Congress, when a key leadership reshuffle is expected to take place. The timing of Sun’s dismissal points to a power play by Xi, who is using his anti-corruption drive in part to purge political rivals and fill the party with trusted allies as he seeks to further consolidate his power within the Party. Sun was replaced by Chen Miner, a longtime associate of the president who is currently the party’s fastest-rising political star. South China Morning Post looks at potential candidates slated for a seat in the Politburo Standing Committee at the upcoming congress:

The first resolution will be for Li Keqiang, the party’s second-in-command, to retain his position as premier. Some observers had suggested that Li, who has a PhD in economics, might emerge from the power reshuffle with a new post. But sources said Xi, now confident of his command over economic and financial policy, had decided to retain Li as premier. Li would keep his seat on the Politburo Standing Committee, the top echelon of Chinese politics.

[…]  One addition to the Standing Committee is likely to be Li Zhanshu, the president’s right-hand man.

But the inclusion of powerful anti-corruption tsar Wang Qishan is less certain.

A report by Nikkei shows that in addition to cementing alliances within the upper echelons of the Party, Xi has also been amassing power through control of the military.

Since coming to power, Xi has taken one of Mao’s most famous maxims to heart: “Political power grows out of the barrel of a gun.” He has moved to take full control of the military, often employing the anti-corruption campaign that he has used to take out political rivals.

[…] “Xi targeted Fang to fill the military nerve center with people close to him,” a military source said. “If Xi is to further cement his grip on power, taking full control of the military is crucial.”In July, state-run Xinhua News Agency started referring to Xi as the military’s “zui gao tong shuai (supreme commander),” a title previously used only for Mao and Deng Xiaoping, both of whom placed the military under their full control while in power.

At the end of July, Xi presided over a military parade in the Inner Mongolia Autonomous Region to commemorate the 90th founding anniversary of the PLA on Aug. 1. He reviewed PLA troops wearing a camouflage uniform instead of the customary Mao suit. The message was unmistakable: Xi is in command of the military. [Source]