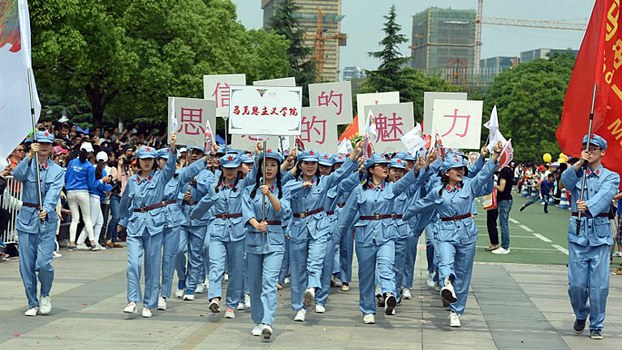 According to a notice issued this month by Zhejiang University, content that is widely circulated online, that shows “core socialist values” and influences public opinion with “correct thinking and culture” now carries the same weight as an academic paper – whether it is in the form of an essay, video or animation.

Content that is posted on the websites and social media platforms of party mouthpieces such as People’s Daily and Xinhua would receive the most credits, the notice said.

[…] Zhejiang University, which is based in the eastern Chinese city of Hangzhou, is not the only seat of learning offering incentives to those who toe the party line. Jilin University in northeastern China is also handing out credits to faculty members whose propaganda is published on state media websites and major commercial news portals.

[…] The online propaganda drive came soon after inspectors from the party’s discipline watchdog in June named 14 top colleges as being “too weak in their political work”. That announcement followed a nationwide programme of inspections. [Source]

The Chinese government has increasingly tightened ideological control on university campuses in recent years. In 2015, the Ministry of Education warned of the spread of “Western values” on campuses and banned textbooks deemed of being critical of the party or socialism. More recently, President Xi Jinping called on institutions of higher education in China to become Communist Party “strongholds.”  The new policy of encouraging academics to produce propaganda work online is likely tied to Xi s attempt to strengthen party leadership ahead of the critical 19th Party Congress, which is set to take place starting October 18th.

Under the new policy, online political writings by professors and students alike will be used in assessments of academic achievement. Xinhua has more:

Works picked up by major commercial portals such as Sina, Sohu and Netease and major publications at Xinhua News Agency and China Central Television as well as on mobile apps and social media accounts, such as WeChat and Weibo, are also equal to publication in key journals if they result in significant influence.

The document also says that the works should be transmitted by no less than 10 mainstream media outlets and have more than 100,000 page views if it is on WeChat.

[…] However, the rule, which took effect in early September, has sparked debate over its feasibility and the extent to which it may devalue academic work.

Viewing the move as an exploration of academic evaluation, the university said outstanding online work would be recognized by a committee of experts in June each year. [Source]

Elsewhere, a funding body under the Chinese Ministry of Education has discontinued state funding to Chinese scholars wishing to study at the University of California, San Diego, in apparent retaliation against the American institution for inviting the Dalai Lama to speak at graduation. Josh Horwitz at Quartz reports:

In June, UCSD hosted the Dalai Lama to speak at its school-wide commencement ceremony for the 2016-2017 academic year. The invitation generated controversy among some members of school’s Chinese student population. The Chinese government strictly controls information within its borders about the Dalai Lama, who it views as a separatist and a symbol of China’s feudal past. Many Chinese citizens hold these same views.

In the months preceding commencement, members of UCSD’s Chinese Students and Scholars Association (CSSA), a global network of Chinese students at overseas schools, met with the university’s chancellor to request that the Dalai Lama refrain from discussing politics at the speech. They also said that they informed the local Chinese embassy of the Dalai Lama’s scheduled appearance.

Now, the Chinese government has retaliated. On Sept. 16, UCSD professor Victor Shih tweeted that a colleague of his received notice that the China Scholarship Council, a branch of the government that funds overseas study for Chinese citizens, would no longer process applications to study at UCSD for scholars who had not already received a visa appointment from the US embassy.

The China Scholarship Council is a branch of China’s Ministry of Education. It typically provides scholarships for graduate students and professors at Chinese universities to travel to an overseas university as a visiting scholar.[…][Source]