Xi Calls for Universities to Be Communist “Strongholds” 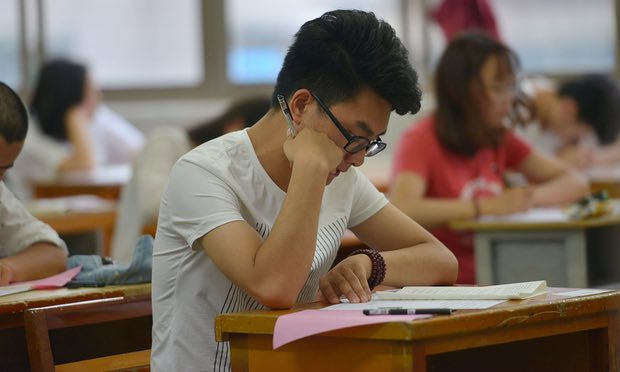 At a high-level meeting on ideological and political work in higher education this week, President Xi Jinping delivered an important address calling on colleges and universities across the country to adhere to party leadership and serve as communist “strongholds.” Tom Phillips at The Guardian reports:

“Higher education … must adhere to correct political orientation,” Xi said in a high-profile speech to top party leaders and university chiefs that was delivered at a two-day congress on “ideological and political work” in Beijing.

Universities must be transformed into “strongholds that adhere to party leadership” and political education should be made “more appealing”, the president ordered, according to Xinhua, China’s official news agency. Experts have described it as the latest phase of Beijing’s bid to rein in opposition to its rule.

Xi, a populist strongman who recently reaffirmed his political authority by being declared the party’s “core leader”, said teachers needed to be both “disseminators of advanced ideology” and “staunch supporters of [party] governance”.

Echoing a 1932 speech by Joseph Stalin the Chinese president told his audience teachers were “engineers of the human soul” whose “sacredmission” was to help students “improve in ideological quality, political awareness, moral characteristics and humanistic quality”.

“Party authorities should increase their contact with intellectuals in colleges, befriend them and sincerely listen to their opinions,” Xi added, pointing out that the party’s education policies “must be fully carried out”. [Source]

The meeting on political indoctrination in Chinese universities was attended by 4 members of the Standing Ctee, a show of its importance. pic.twitter.com/TbSajKDfmy

Chen Xu, party chief at the prestigious Tsinghua University, was quoted by China Education Daily as saying that instructors’ political stances would be made central to their performance evaluations, and that faculty and department party committees would routinely report on the political thoughts of young lecturers.

A party official from the Guangdong-based South China Normal University told Xi that it had built a database to track and analyse political opinions of more than 2 million college students in the province.

A professor with the Beijing Institute of Technology said that it planned to introduce electronic games to make political education more appealing, and raise the political awareness of its students “subliminally”, the website of People’s Daily reported yesterday. [Source]

Xi’s speech is the latest effort by the central government to reassert political control over education through the promotion of ideological conformity. The president has called for tighter ideological control on college campuses since as early as 2014. Universities were ordered to expand classes on Marxism and Chinese socialism in January 2015. Textbooks that contained western values were subsequently banned from school curriculums. Michael Martina at Reuters looks at these developments and how they might hurt China’s prospects of building world-class universities.

Crackdowns on what academics and students can say are nothing new in China. Curriculums and speech at universities, in particular, are tightly controlled by the government, fearful of a repeat of the pro-democracy protests in 1989 that were led by students.

In 2013, a liberal Chinese economist who had been an outspoken critic of the party was expelled from the elite Peking University.

A year later, the university, once a bastion of free speech in China, established a 24-hour system to monitor public opinion on the internet and take early measures to control and reduce negative speech, according to a party journal at the time.

China aims to build world-class universities and some of its top schools fair well in international rankings by various standards. However, critics argue constraints on academic freedom could inhibit those ambitions. [Source]

A report by Xinhua discusses the rationale behind the need for party leadership in post-secondary institutions and the importance of integrating ideological work in higher education:

As higher education shoulders the major responsibility of cultivating successors for the socialist cause, it must adhere to correct political orientation, Xi said, adding that only by cultivating first-class talent can universities become world-class institutions.

Improving the ability to cultivate talent is the core work of higher education and must be the focus, Xi said.

The president called for greater efforts to teach Marxist theory to help students lay an ideological foundation for their lives. [Source]

@Ricky_Jeffrey (3) Political controls in Chinese higher ed. have been tightening for several years. But now, Xi Jinping himself signing off personally …

@Ricky_Jeffrey … at a national conference devoted exclusively to subject. That’s big. Reverberations will echo down Party bureaucracy for a long time.

@Ricky_Jeffrey (4) The tone and content is tough. Characterizes all professors as bearing political responsibilities. Reminiscent of ideological pivot ..

@Ricky_Jeffrey …Party made 10 yrs ago when redefined role of lawyers. Big effect on role of bar associations, treatment of public interest lawyers, etc.

@Ricky_Jeffrey …since the beginning of reform era. Of course, in China 上有政策，下有对策, so won’t totally disappear. But now a very stiff wind blowing from 中南海。

(6) @Ricky_Jeffrey Last, there is a fundamental shift in tone regarding utility and desirability of foreign ideas and knowledge.

@CarlMinzner @Ricky_Jeffrey So will they stop sending their children to study with us?

@peterlorentzen @Ricky_Jeffrey Good Q. Already heard from some PRC students that foreign degrees no longer carry same advantages once did.

@peterlorentzen @Ricky_Jeffrey And can be a black mark for some gov. posts. Naturally, many reasons. But shift in political winds is one.