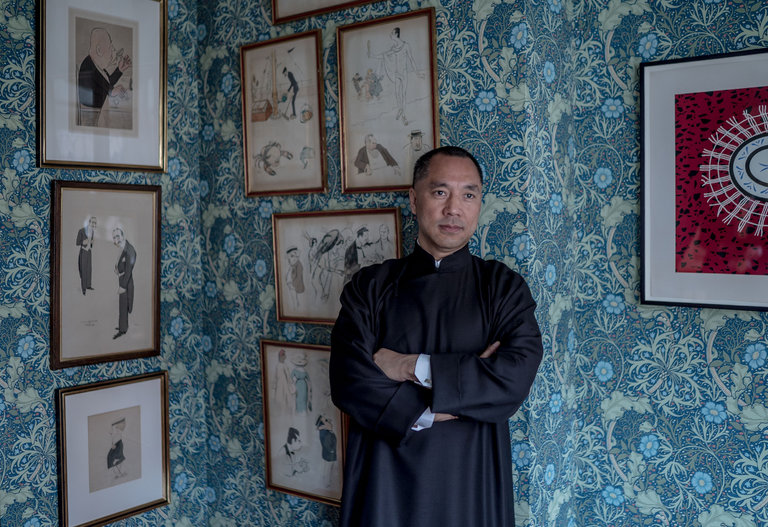 Fugitive Chinese property tycoon and whistleblower Guo Wengui has applied for asylum in the United States, according to his immigration lawyer Thomas Ragand, who said the decision was made out of concern for Guo’s safety because his explosive corruption allegations against China’s political and corporate elites had made him a target of the Chinese Communist Party. Michael Forsythe at The New York Times reports:

The billionaire, Guo Wengui, who is in the United States on a tourist visa that expires later this year, is seeking asylum status because his public charges against Chinese officials have made him “a political opponent of the Chinese regime,” Thomas Ragland, a Washington-based lawyer representing him, said in a telephone interview late Wednesday.

Asylum — even a pending asylum application — would give Mr. Guo more protection because he could stay in the United States while the application was being considered, a process that can take years, Mr. Ragland said.

“Asylum offers a level of protection that is different from having a visa status,” Mr. Ragland said. “Visas can be canceled or revoked.”

[…] Mr. Guo’s asylum application may be complicated by his claims that he has passports from many countries, including the United Arab Emirates, and is no longer a citizen of China. It is unclear why Mr. Guo could not go to another country where he has citizenship when his United States visa expires, though Mr. Ragland said that the United States might be the only country where Mr. Guo feels safe from the long arm of the Chinese state. [Source]

Guo, who has suspected ties with China’s state security agency, left the country in 2013 shortly before the arrest of former Vice Minister of State Security Ma Jian, a close associate of Guo’s. Guo currently lives in New York, where he hurls accusations of corruption at top Communist Party members and business leaders via Youtube videos and Twitter posts. The primary target of Guo’s allegations is Wang Qishan, the head of the Communist Party’s anticorruption and discipline commission, whose family Guo has accused of secretly controlling the HNA Group, one of China’s largest conglomerates. Guo’s asylum application comes as Wang appears to have “regained his footing” despite Guo’s ongoing attacks. A pivotal Party congress scheduled to begin next month will determine whether Wang, who has reached the mandatory retirement age, will be given an extra term in the Politburo Standing Committee.

[…] “I am the only member of Barack Obama’s cabinet that has met with Donald Trump,” Johnson was heard saying in the recording. “I wrote him a personal letter yesterday.”

When asked by the Post if any former or current US government officials had offered Guo asylum in the past, Ragland responded: “not that I’m aware of”.

Ragland added that Johnson is no longer in the government. “[Johnson] expressed his interest in helping, but not any sort of offer,” Ragland said. “He is not in the position to make an offer anyway.” [Source]

Guo’s asylum application could take anywhere between a couple of months to several years to process and would likely pose a diplomatic dilemma for the Trump administration, possibly complicating Trump’s efforts to secure Beijing’s help in containing North Korea after it conducted a series of missile tests. From Chun Han Wong and Felicia Schwartz at The Wall Street Journal:

A decision to grant Mr. Guo asylum could lead to diplomatic complications for the Trump administration, which is seeking China’s cooperation in pressuring North Korea as Pyongyang ramps up its testing of missiles and nuclear technology. Beijing has indicated it wants Mr. Guo returned to China as a wanted exile, and his pending request will likely be an additional irritant between Beijing and Washington.

The U.S. and China don’t have an extradition agreement.

[…] Mr. Guo is living in the U.S. on a tourist visa that expires within weeks, Mr. Ragland said. “In addition to the asylum claim, we may apply to extend that visa or to change to a different visa status,” he said, adding that a visa would allow Mr. Guo more freedom to work in the U.S. and travel abroad, compared with a basic entitlement to remain in the country granted by an asylum application.

Asylum seekers usually must apply within one year of arriving in the U.S., though there are exceptions. Applicants undergo fingerprinting and a background check and after that, an interview with immigration officials, according to U.S. Citizenship and Immigration Services. [Source]

Beijing has responded to Guo’s accusations by discrediting him with a series of media and cyberspace campaigns both at home and abroad. At the request of the Chinese government, an Interpol red notice was issued in April seeking his arrest. Guo is also being sued for libel by several Chinese individuals and companies in U.S. courts and is being investigated in China for 19 crimes, including bribery and kidnapping. His lawyer believes he will likely face politically motivated criminal charges filed against him by the Chinese state. In the latest move by Beijing to build a case against Guo, Chinese authorities announced last month that they are now investigating the property developer for alleged rape of a former employee. From AP:

In interviews with police, the woman described how she was plucked from her human resources position at Guo’s real estate company in Hong Kong in 2015 and sent overseas to become his personal assistant. The woman, whose identity is being withheld by the AP, said that over the next two years, she was raped several times in New York, London and the Bahamas by Guo, who she said demanded sex from female employees as a test of their loyalty.

At times, she said, she languished in virtual detention after Guo’s staff confiscated her smartphone, computer, passport and keys and forbade her from leaving her room in his luxury apartment in the high-end London neighborhood of Belgravia. To prove her case, the woman surreptitiously met a lawyer friend in London earlier this year to give a written statement about her ordeal and kept her underwear, pregnancy tests and abortion pills as evidence, according to police documents.

In a brief phone interview with the AP arranged by Chinese officials, the woman confirmed the account and described fleeing Guo’s apartment to the Chinese Embassy in London in April to apply for a new passport before returning to China. She said she was speaking of her own volition and that police had assured her she could bring charges against Guo without facing repercussions for having worked for a highly sought-after fugitive. [Source]

Caty Weaver and Dan Friedell at Voice of America have more on the case:

The Associated Press examined documents related to the rape investigation. It confirmed their details with Chinese official sources in Beijing. The officials asked not to be identified in return for discussing the case.

The willingness to talk to the press is unusual given the political sensitivity of Guo’s case in China. It suggests an urgency in detaining Guo and in stopping any possible trouble leading up to the Chinese Communist Party congress next month.

China and the United States do not have an agreement about surrendering criminal suspects to each other. China hopes that increasing evidence will persuade the U.S. government against extending Guo Wengui’s visa. His visa is believed to expire in October, Chinese officials said.

Top U.S. and Chinese officials have discussed the accusations against Guo, said another person with direct knowledge of the talks. That person spoke on the condition that he or she would not be identified. The source also said Chinese officials are asking the U.S. to cancel Guo’s visa. [Source]