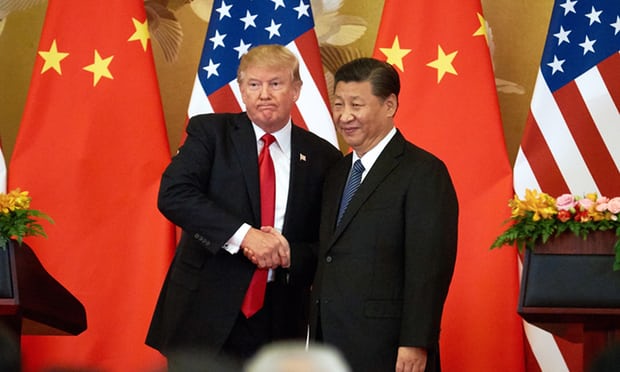 On Donald Trump’s first presidential tour of Asia, he enjoyed red-carpet treatment in China during what Chinese state media billed as a “state visit-plus.” After a military parade welcome that he deemed “magnificent,” Trump was treated to a personal tour of the Forbidden City, complete with dinner (a first for a U.S. president since the founding of the PRC) and a traditional opera and acrobatics performance. President Trump appears to be getting along with Chinese counterpart Xi Jinping wonderfully—a far cry from his staunchly critical China-focused campaign rhetoric, Trump lavished praise on the country and its leader, blaming his predecessors for the trade deficit that he compared to rape during a May 2016 rally.

In a departure from recent Sino-U.S. diplomatic precedent, Trump and Xi both refused to answer questions from reporters at a press conference. At NBC News, Adam Edelman and Ali Vitali report:

After a day of meetings, Trump and Xi gave joint remarks in Beijing’s Tiananmen Square Thursday — but the two leaders exited without taking questions.

Trump’s refusal to answer questions from the media in China marked a break from examples set by former Presidents Barack Obama, George W. Bush and Bill Clinton. All three took at least one question during appearances with their Chinese counterparts, as part of an effort to exert pressure on China’s government to allow exchanges with reporters.

White House Press Secretary Sarah Huckabee Sanders told CNN “it was at the Chinese insistence there were no questions today.”

Xi has maintained tight control over the press in China and last year introduced a policy enforcing that the news media must pledge loyalty to the state.

Trump, meanwhile, fueled his meteoric presidential campaign by blasting several media outlets as “fake news” and has not relented since taking office. In February, he tweeted that the media is the “enemy of the American people.” [Source]

Trump’s lack of fielding even a token show question from the press pool attracted denouncement from both journalists and former White House press aides. At The Guardian, Joanna Walters reports:

Prominent journalists traveling with Trump and back in the US erupted at the gagging of press at a joint appearance by the US and Chinese leaders in Beijing on Thursday.

[…] “The Chinese try this every time. It’s a test of will and principle. Letting them dictate press access is an embarrassing capitulation,” Jay Carney, former press secretary to Barack Obama when he was president, posted on Twitter.

“Weeks are spent negotiating every aspect of [president’s] foreign travel, including press access. China often attempts to pull back previously agreed-to access on day of events. It’s job of White House staff to push back on matters they prioritize. Acquiescence = bad negotiating or agreement with the Chinese,” he wrote on Twitter.

Another former White House press aide, Gregg Pitts, who worked for George W Bush spoke of pushing back during a visit to China when the Chinese authorities had tried to limit access to the internet for journalists traveling with the US president and sought to silence any questions. [Source]

So much for "art of the deal." A news briefing without questions is just a speech. President Trump should have negotiated with #China to allow reporters to ask questions like past administrations have https://t.co/0cMHwjVlu5

They always insist, Sarah. The trick is to use diplomacy to extract that concession as a matter of principle, despite their resistence. https://t.co/4SrSmvUPSi

The White House social media director, who's tweeting out state-run media's coverage of the trip, changed his Twitter background photo to a picture of Xi and Trump — surrounded by Chinese troops. https://t.co/IdinhpSlgd

While the White House social media director followed Chinese state coverage of the visit, the narrative presented by state-affiliated Global Times appears to have taken a lead from Trump himself, criticizing “fake reports” on him, and praising his family and pragmatic approach to China. CNBC’s Huileng Tan reports on the Global Times’ coverage, comparing it to earlier, less flattering remarks from the nationalistic tabloid:

In a Thursday editorial, China’s Global Times praised many of the U.S. leader’s qualities, and criticized the American media for “fake reports” that painted a negative picture of the man.

“Trump is one of the most popular heads of state on the Chinese Internet, and generally the Chinese public holds a positive attitude toward him,” wrote the Global Times, a Communist Party-owned newspaper.

[…] In its editorial, the Global Times wrote that the supposed high opinion of Trump in China “doesn’t come easily, as the initial impression of Trump was completely led by U.S. media reports.

“These absurd reports deeply influenced Chinese public opinion. It wasn’t until his election victory that the Chinese public realized they had been cheated by the American media,” it added.

[…] In December, Global Times called Trump “ignorant like a child” in handling diplomacy after the then president-elect stated that the U.S. did not necessarily have to stick to the “One China” policy. [Source]

In his latest tweet on his successful and historic visit to China, @realDonaldTrump called talks on trade and the DPRK “very productive,” and changed his Twitter banner to a photo taken with President Xi and Madame Peng at the Great Hall of the People in Beijing pic.twitter.com/S1rdnMXu9B

As Chinese official media returned Trump’s praise and the two presidents formed a united front against press questions, Chinese censors took to cleaning up commentary of the high-profile state visit on Weibo. CDT Chinese editors found that Sina had enacted keyword filtering which systematically censored Weibo posts on Trump’s time in China. The findings suggest that the censorship was broad to the point that largely innocuous commentary on the deals signed between the two disappeared.

CDT Chinese’s analysis also showed that Sina initiated a mandatory closing of comment sections—another common Weibo censorship method—in which users with more than a few followers appeared to have comments on their posts automatically closed after a keyword was triggered.

One Weibo user, however, managed to use a screenshot to share a classic joke updated to be relevant to Trump’s visit and related social media controls without irking censors. CDT has translated the joke below:

American: We can discuss our president on our social media platforms. Can you?

Russian: Of course, we too can discuss your president on your social media platforms.

The American drew the lesson, then went off in search of a Chinese person.

American: We can discuss our president on our social media platforms. Can you?

Chinese: Of course. We can discuss your president on our social media platforms.

American: You should go give it another try. [Chinese]

China Media Project drew attention to a similar joke on Weibo that didn’t escape censorship, in which a conversation between and American and a Chinese mocks the increased uniformity of China’s state-controlled media under Xi Jinping.

On Twitter, Isaac Stone Fish calls attention to yet another geopolitically and topically relevant joke:

The official shows up, and reporters shout questions at him. He looks at them, and leaves the room. His aide explained, "we said he would take questions from reporters. We never said he would answer them."