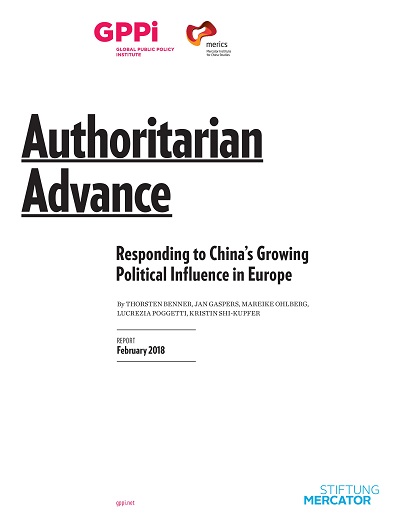 Chinese government influence over the political, media, and academic institutions in foreign countries, especially Australia, has garnered much international attention in recent years. Less attention has been paid to China’s actions in Europe, but a recent report by Germany’s Mercator Institute for China Studies (MERICS) and the Global Public Policy Institute examines how many European political and business leaders are looking to China as an alternative to Russia for funding and cooperation opportunities. At the Washington Post, Rick Noack reports on the MERICS study and another by the European Council on Foreign Relations:

The study argues that Beijing pursues a number of goals, which include portraying China as a role model and as an alternative to liberal democracies. But the efforts are also aimed at “creating layers of active support for Chinese interests” that may eventually pit Europe against the United States when it comes to the recognition of disputed territorial claims in the South China Sea, for example, or meetings with the Dalai Lama.

“China senses that a window of opportunity to pursue its goals has opened, with the Trump administration seen as withdrawing from the role as guardian of the liberal international order that the U.S. has long played,” the authors write.

[…] China’s offers to Europe, a recent study by the European Council on Foreign Relations’ François Godement and Abigaël Vasselier concluded, are “are not very different from those offered to African and other developing nations: a flurry of projects creating competition among recipients, loans at commercial rates, and a strong insistence on identical statements and agreements.” Like African nations, European countries, especially those in the east and south, appear to have fallen for a trap, which mostly benefits China, Godement and Vasselier write.

“China practices ‘pick and choose’ in its relations with the European Union, focusing on its direct interests, and often ignoring EU norms in its proposals,” they argue, writing that bilateral deals have focused on Europe’s periphery instead of the European Union as a whole. “China holds its own summit with central and eastern European nations, the so-called 16+1, and it seized the opportunity of the euro crisis for massive takeovers in southern Europe.” [Source]

The report offers a number of recommendations to European governments. From the introduction:

The report argues that European states need to act swiftly and decisively to inhibit the momentum of the CCP’s influence operations. Several steps are recommended, including: a stronger focus on leveraging the collective weight of EU member states, investing more resources into independent China expertise and providing alternatives to Chinese investments in Europe. The authors also call upon Europe to develop a flexible set of investment screening tools and to strengthen national and European security regimes, including cybersecurity and counter-intelligence. [Source]

The state-affiliated tabloid Global Times responded to the MERICS report by slamming the think tank as “misguided academics,” according to a translation of their editorial by China Media Project.

In The New York Times, Didi Kirsten Tatlow, who is currently a fellow at MERICS, wrote about the influence of the Chinese government in Germany, where she is now based after several years in China:

In recent months China has sent up a series of trial balloons to see how far it can stretch the boundaries of German democracy. First and most easily spotted: challenges to free speech and political protest on German soil.

Take an incident in November, when the Chinese halted a soccer match between their under-20 team and TSV Schott Mainz in southwestern Germany to protest a handful of Tibetans and German fans with Tibetan “snow lion” flags. China regards the flags as a sign of resistance to its rule in Tibet. The Chinese players returned to the field only after the flags were furled. (China lost, 3-0.)

“Of course we stand by freedom of expression,” Ronny Zimmermann, a vice president of German soccer’s governing body, said afterward. “Our partner hasn’t really been able to get used to it yet.” A planned series of matches has been postponed. Germany has an excellent opportunity to defend democracy by canceling them until China agrees to respect free speech and political protest here.

As part of the broader Belt and Road Initiative, China is also investing huge amounts of money into infrastructure projects across Europe, including ports. These projects often come with expectations that the recipients will do Beijing’s bidding in global diplomatic negotiations. From Keith Johnson at Foreign Policy:

The port deals are one of the clearest manifestations of Beijing’s ambitious plans to physically link China to Europe by sea, road, rail, and pipeline. The ports underpin the maritime half of the Belt and Road Initiative, snaking from the South China Sea across the Indian Ocean, through the Suez Canal and into the soft underbelly of Europe.

“For somebody like Cosco, the deals make sense financially, and they can make their lords and masters in Beijing happy because it fits the Belt and Road narrative,” said Neil Davidson, a senior analyst for ports and terminals at Drewry, the maritime consultancy. “At bottom, there is a geopolitical underpinning to a lot of this.”

[…] “The fundamental goal seems to be to decrease China’s dependence on foreign elements and increase China’s influence around the world,” said Frans-Paul van der Putten, a China expert at the Netherlands Institute of International Relations.

That rising influence is spooking many in Europe. With Chinese investment skyrocketing, European leaders are growing increasingly leery that Chinese President Xi Jinping is turning China’s economic heft into political pull. Since Cosco dropped $1 billion into buying and upgrading the once-sleepy Greek port of Piraeus, for example, Beijing has been able to count on Greek assistance to scupper European Union condemnations of China’s behavior on issues including human rights and the South China Sea. [Source]

Direct pressure from the Chinese government or concerns over possible consequences has also impacted the cultural and commercial sectors in Europe. In London, the Royal Court theater recently cancelled the production of a play about Tibet; the playwright said the cancellation was based on fears over Chinese government retaliation. From Ben Quinn at The Guardian:

Majumdar claimed the play was withdrawn because of fears over the possible impact on an arts programme in Beijing, where Chinese writers are working with the publicly funded theatre and British Council.

His play deals with life in contemporary Tibet and draws on personal stories of Tibetans he worked with in India, which is home to a substantial community of exiles, including the Dalai Lama.

The play was in development for three years and rehearsals had been fixed, according to Majumdar, who claimed that the British Council had “pressurised” the theatre to withdraw it because of sensitivities relating to the writing programme. A team from the Royal Court has been working with 16 writers in Beijing on their plays, according to its website. [Source]

German carmaker Mercedes-Benz recently issued a statement apologizing for using the words of the Dalai Lama, whom Beijing considers a “splittist,” in a company Instagram post. This follows several other global brands apologizing to China for their references to Tibet and Taiwan in social media posts.

In an interview with CDT in December, Anna Zádrapová and Martin Hála of Prague-based Synopsis explained the growing appeal of China over Russia for many in Eastern Europe:

The sad fact is that people just don’t know much about contemporary China. Is it communist or capitalist? Rich or poor? Is it getting more democratic and free, or less? This confused image probably exists anywhere, but perhaps more so in Eastern Europe that had until recently relatively little exposure to the PRC. Given their own history, people in the region used to be instinctively put off by the fact that China is a communist dictatorship. Thirty years after the fall of communism in Eastern Europe, this seems to matter less, plus the Chinese communists appear unusual in that they carry a lot of cash; the comrades we used to know were always poor. At the same time, the ideal of democratic capitalism that East Europeans aspired to in 1989 suffered quite some shock in the 2008 financial and 2015 refugee crises. Many people now look at China and see less the “dictatorship” part, and more the “money” part. [Source]