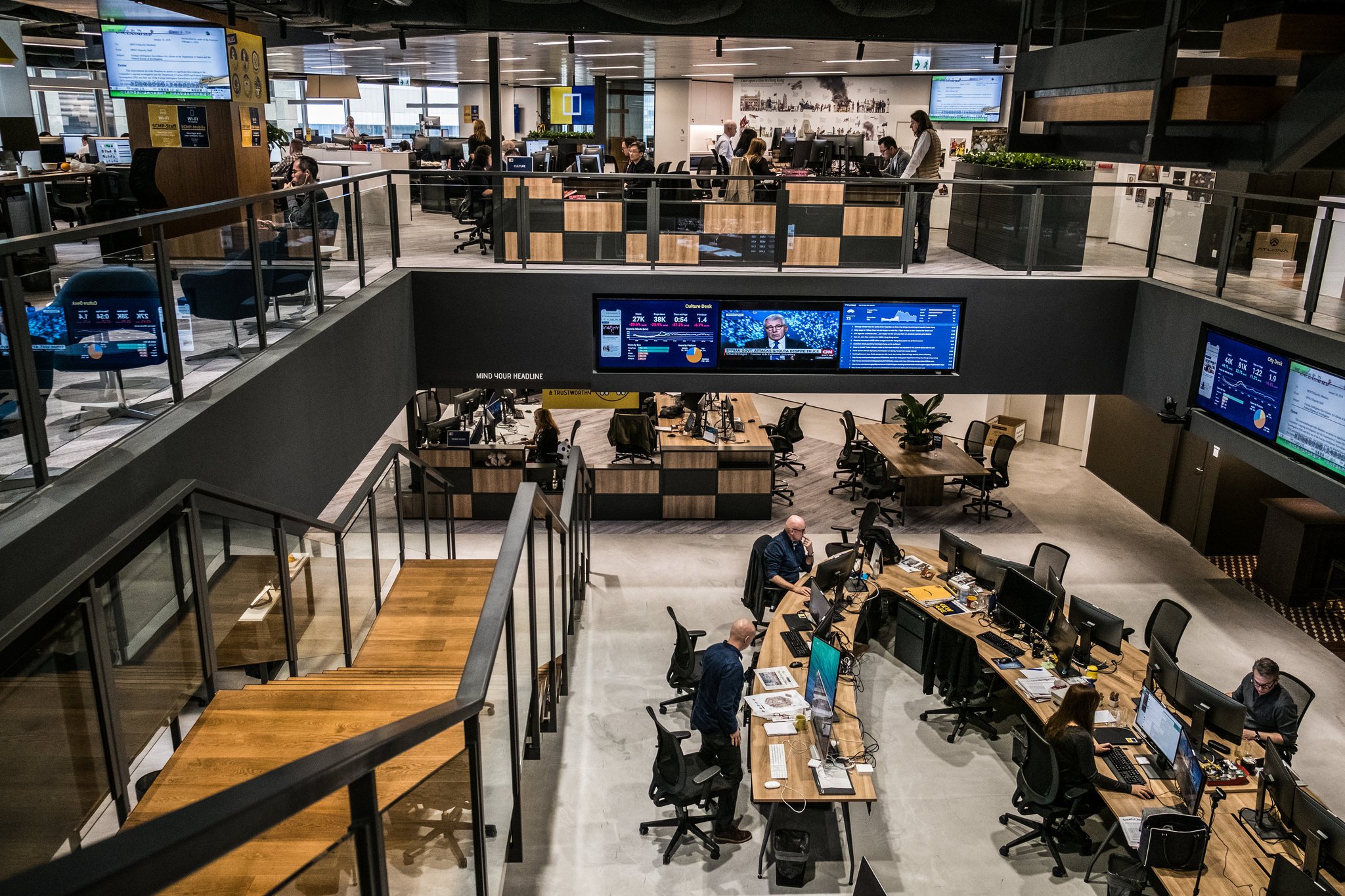 On Saturday, The New York Times published a piece by Javier C. Hernández scrutinizing the Hong Kong-based South China Morning Post, two years after its acquisition by mainland tech tycoon Jack Ma’s Alibaba Group. Business has reportedly boomed under the new ownership, with online traffic tripling after the removal of the site’s paywall, but many are wary of Alibaba’s declared aim of using the paper to counter alleged Western media bias against China.

“By explicitly stating that its aim is to tell a positive story of China and running questionable stories, management undermines the very attributes that make The S.C.M.P. useful in the first place,” said Yuen Chan, a journalist and senior lecturer at the Chinese University of Hong Kong.

[…] Gary Liu, a Harvard-educated technology entrepreneur who is The Post’s chief executive, said the newspaper could offer a more nuanced portrait of China than Western news outlets, with a staff of 350 journalists in Asia, including about 40 in the mainland.

[… A] culture of self-censorship at the newspaper predates its purchase by Alibaba, said Wang Feng, who served as The Post’s online editor from 2012 to 2015. He said top editors routinely rewrote, played down or withheld critical stories for fear of offending influential Chinese officials or business executives.

[…] “The Post risks being a vehicle in Beijing’s overall propaganda machinery,” said Willy Wo-Lap Lam, a scholar at the Chinese University of Hong Kong and a former Post journalist.

[…] Chow Chung-yan, who oversees coverage of China and Hong Kong, denied The Post yields to pressure from Beijing.

“We are independent and free,” he said. “We don’t have people calling into our newsroom asking what we will publish.” [Source]

The article prompted an unusually strong reaction on Twitter among journalists, many of them former SCMP staff, and other observers.

I see people have V wide range takeaways from this piece about the @SCMP_News under Alibaba ownership, from amazement how it continues to cover China w/ granularity & perspective like no other, to deep disappointment in some choices (or not) of stories https://t.co/WwVgWhwDb0

I was never shy about my feelings for the SCMP when I worked there (to the point some called me petty, 'zhuangbi' & else) but hell for someone who's switched 7∼8 journalism jobs in 20yrs , it was an experience for a lifetime. But for a paper whose new owner …

was honest since day1 about what they thought of 'mainstream Western media' & and what they want the new SCMP to stand for, I have to say it's turned out far better (with my own strong reservations of course) than most Western journos & pundits expected, even by their standards.

#SCMP is Hong Kong's (English) media of record & subject to political and cultural pressures, as it was under the British, differently. I'm amazed how it continues to be so interesting & valuable despite that. (Full disclosure: I once worked for the Post.) https://t.co/piXwnmt8eu

No English paper covers China with the same breadth as the SCMP. For so many of us working here, it’s indispensable. https://t.co/jpFOFKjXAy

SCMP is embedded in its environment just as the NYT is. Both are part of the story they tell. https://t.co/QCNjkMUqxU

Indeed. And while the SCMP might sometimes play stooge to the CCP, it has not yet used its editorial pages to argue for war, which the NYT did. https://t.co/5zj8qsRmnU

To be fair, I've found much of @SCMP_News coverage of the recent NPC, Xi, the party's techno-totalitarian ambitions, and the rights abuses in Xinjiang to be quite strong. As the party's tentacles now descend further into tech, media, and society, we'll see…. https://t.co/TTghFCPrCc

Good point. I found their coverage of the missing booksellers, for example, to be essential (I covered story for NYT and @SCMP_News was must-read） They still do good, often essential, journalism. @nerysinchina makes the good point – it is amazing what they still can do.

Others, including SCMP’s former editor-in-chief Wang Xiangwei, were unimpressed by the NYT report:

That the Times evidently intended this as an exposé but couldn’t turn up any dirt other than that already thoroughly litigated in public or an uptick in Alibaba coverage speaks to the Post’s credit: https://t.co/wwHJzmac97

Having had most of the day to digest the NYT’s non-expose on the SCMP https://t.co/SqVpuT0HZa, I’d say the most interesting par is this one. Listed companies losing money on mature businesses must have compelling reasons for doing so … pic.twitter.com/ZVSdglAq8U

Just as Donald Trump carps about the “failing New York Times”, it published a biased story on SCMP. Here are snapshots of my latest columns, hardly “on a mission”. I am proud of being a growing team to tell an ever interesting/complex China story to outside. pic.twitter.com/neWDXfderw

US mainstream media’s foreign affairs coverage not meant to reflect/promote America’s values and interests, a.k.a. soft power? Sorry guys but this is BS. Since when did we have to make the false choice between China-bashing and Chinese propaganda? https://t.co/BII7SCpiI3

The Times’ report comes as the U.S. Sinclair Broadcasting group forces its local stations to broadcast what critics describe as pro-Trump "propaganda" on one hand, and the President himself launches fresh attacks on "The ‘Fake News’ Washington Post" on the other.

SCMP also came under some harsh criticism, particularly over its February interview with detained Hong Kong publisher Gui Minhai and its coverage of the disappearance from Hong Kong of mainland elite-linked billionaire Xiao Jianhua. In 2016 SCMP also published an interview with "Black Friday" detainee Zhao Wei after her reported release but before even her husband or lawyer had been able to contact her. Wang Xiangwei was confronted over Gui’s case by the BBC’s Stephen McDonell, NGO founder and former detainee Peter Dahlin, and Cornell University’s Magnus Fiskesjö:

SCMP is embedded in its environment just as the NYT is. Both are part of the story they tell. https://t.co/QCNjkMUqxU

Very true. Instead of writing about SCMP, NYT can do better focusing upon doing a better job covering the complex China story at a time it just clams up and the rest of world demands more intelligent insights. https://t.co/nshvjj5Rtk

Actually I think the health of the South China Morning Post is a story of vital public interest. Apart from #HongKong it's a major source of news on mainland #China. We need it to be good. If it deteriorates it'll be a major blow to the whole region. @SCMP_News https://t.co/zDTE6rkQau

As an avid reader of the SCMP I, like others, am keen for it to maintain high standards. As for Gui Minhai if you're going to be used in a trumped-up confession situation you must report it that way just like in Nth Korea you acknowledge presence of minders etc in your piece.

In the case of Gui Minhai, my understanding is minders were absent, the story did say it was government arranged and also included quotes from independent commentators.

Comon it was more than "government arranged". That was a forced confession from a person being held in state custody.

That I agree with. Hey, I am not being difficult here. By that logic, every interview you get in Noth Korea was a forced statement from the people held in state custody.

Not every interview in North Korea but in the case of say Otto Warmbier or Kenneth Bae it would be. When I have reported from North Korea we did make it clear that minders where there and mentioned people being unable to speak freely etc. You have to.

Growing up in a country used to be like North Korea, I found it hard to believe someone in North Korea was allowed to speak freely to a foreign correspondent unless that person had a death wish. But I also agree the Post’s Gui Minhai story could have been more direct and forceful

I think the main thing was to be more frank about the conditions in which it took place and the recent use of these sometimes televised forced confessions in the Chinese system. If you're going to be the delivery vehicle for one of these then you have to be straight about it.

"Do better"? Without a full apology (& firing those responsible) for stooping to "interview” #GuiMinhai, a torture victim, SCMP is no longer a newspaper, it's just another China propaganda outlet, like Xinhua etc. There is ZERO defense for the SCMP in this https://t.co/zsr3AMqZX0

After the Hong Kong-Alibaba Chinese paper South China Morning Post stooped to attending the staged spectacle of my old friend Gui Minhai, a fellow human being, I submitted this demand for an apology. The SCMP refused to print it. pic.twitter.com/EkPRYaGfEv

That's it? That's your defense? @wangxiangweihk uses the "someone else would do it if we didn't" defense to justify the #GuiMinhai "interview" (notice the "" marks…) @SCMP_News @TammyHongKong https://t.co/0EeFpjN0bq

I’m merely stating the trade offs a journalist does each day in order to get the news not unlike someone western journalists bravely go to NKorea where you know everything is controlled. Following your logic, there is no point going there?

As a journalist, please give me one single reason why SCMP would send someone to a prison to broadcast what you already know was forced upon #GuiMinhai to tell the "journalists" gathered. One reason, other than PR for CCP. One? https://t.co/9WnlB1qpHA

Another pet peeve is SCMP’s refusal to follow reporting from a number of media including NYT that Xiao Jianhua was abducted from HK to China. Instead they have said he returned under mysterious circumstances….which given their sources must be a deliberate desire to mislead. https://t.co/uMygo7af1B

Several people cited current SCMP coverage, either in its defense or otherwise:

An example of when @SCMP_News can still do good inside China coverage. China’s foreign service has ageing problem, older ambassadors clinging on, mid level foreign service officers leaving and a plethora of young, inexperienced diplomats below that https://t.co/xBqv1lcU8Q

This problematic SCMP piece argues that privacy is not part of Chinese culture. First, many Chinese people do, in fact, value privacy. Second, what does "Chinese culture" mean? (Hong Kong has decent data protection rules, for instance.) https://t.co/13g66MCCCu

To some extent this seems to echo Xi talking points about some mythical, unified "traditional Chinese culture" that ignores all the variation across time/place.

This piece of news is more like disguised propaganda to justify Beijing's human rights crimes in Xinjiang. It should have mentioned the massive arrests of Uyghur muslim in the name of counter terrorism. https://t.co/7vrC0Thc5u

The article in question did offer a quote from the Royal United Services Institute’s Raffaello Pantucci which provided some balance to the headline’s claim: "while China clearly has something to worry about, [… it so far] has not shown any evidence of foreign fighters making it back home."

Elsewhere, AFP’s Joanna Chiu, another SCMP alumna, posted an extended Twitter thread citing her previous work for the Committee to Protect Journalists to put the SCMP case in the broader context of media freedom in Hong Kong and Taiwan.