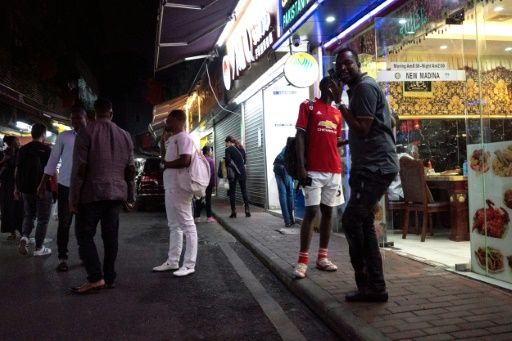 As China’s diplomacy, trade, and investment in African nations has increased in recent years, the population of Africans living in China has swelled. A region in the southern city of Guangzhou has earned the name “Little Africa” or “Chocolate City” due to the number of African expats— largely from the West African nations of Nigeria, Ghana, and Mali—living in the region. Official figures state that about 20,000 Africans live in the area, but experts estimate the true number may be as high as 150,000. Following a reported mass exit of African expats from Guangzhou in 2016 due to a combination of tightening Chinese immigration policies and economic factors, the AFP reports on a recent police crackdown on Africans in Little Africa that has stoked fear and anger among the expat population:

The commercial hub has long been a magnet for fortune-seeking Africans, but traders and students say they face unfavourable visa rules and increasingly heavy policing.

[…] Police vans with flashing lights and officers astride motorcycles congregated after nightfall recently at a small public square in Xiaobei, a “Little Africa” neighbourhood with halal restaurants on narrow winding streets.

A Nigerian merchant was returning home from a meeting with wholesalers earlier this year when officers handcuffed him and hauled him to a police station because he was not carrying identification.

It was only after his Chinese landlord vouched for him over the phone that police allowed him to retrieve his passport in his apartment — under close watch.

“They do this because Africans live here," said a Ghanaian student who was awoken in the middle of night by police pounding on his door.

“I was sick of being treated like a criminal."

My report on a worsening atmosphere of fear in "Little Africa": https://t.co/hy1lQPBkXp

At the South China Morning Post, He Huifeng reports further on the increasingly difficult times for African expats in Guangzhou, contrasting the worsening economic prospects for Africans in China with the increasingly favorable situations for many Chinese expats and investors in African nations:

Don, the Kenyan trader, said rising costs were prompting many in the community to look elsewhere for potential.

“Our profit is very slim, compared with before,” Don said. “Most African trades from China are basic goods, like clothes, shoes, electrical appliances and low-end smartphones. The goods’ prices, logistics and living cost are all soaring too high in China.

[…] For Chinese investors in Africa, however, the situation appears more favourable.

Su, the expatriate in Ghana, noted the influx of Chinese entrepreneurs to the continent.

“In the last couple years, we have seen a boom of hundreds of Chinese private manufacturers setting up factories in Ghana, producing things from mattresses, furniture, textile fabric to iron and steel and plastic products,” Su said. “We heard of similar developments also happening across the Africa.” [Source]

Read more on African expats living in China, or on Chinese expats living in African countries, via CDT. See also a 2016 report from PRI on a decade-long project by American photographer Daniel Traub documenting the African influx into Guangzhou, or follow the blog Africans in China for cultural analysis of the phenomenon.