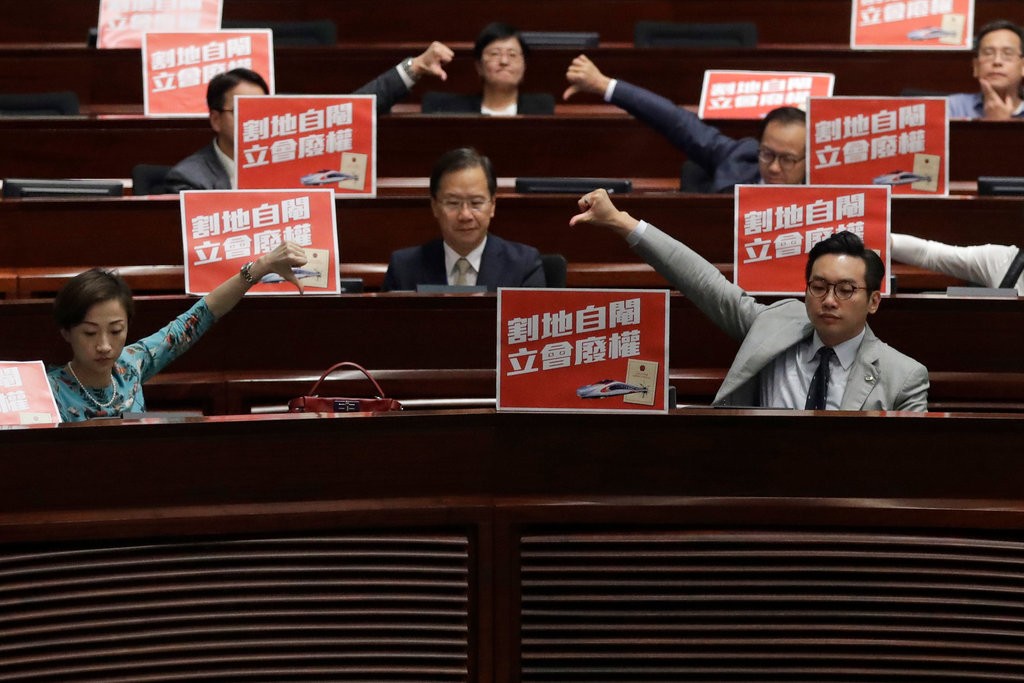 Hong Kong’s Legislative Council yesterday approved a controversial bill that will allow Chinese authorities to enforce mainland law at the West Kowloon station, a new rail terminal to the mainland scheduled to open in the city later this year. The new bill, which passed 40-20 with one abstention, will allow passengers to clear Chinese border security while still in Hong Kong. At The New York Times, Austin Ramzy contrasts the economic allure of the new station with concerns that this will further contribute to Hong Kong’s eroding autonomy:

To the Hong Kong government, the West Kowloon station is important economically, accelerating access to mainland China and its growing high-speed rail network. But to many legal scholars and democracy supporters, it is a trap that will rob Hong Kong of a measure of autonomy, and set the stage for it to lose much more in the future.

The new rail line will cut the two-hour trip between Hong Kong and the city of Guangzhou to 48 minutes. Some critics, though, have questioned the project’s $10.8 billion cost, an increase from the original estimate of $8.3 billion, when Hong Kong already has rail links with mainland China, in addition to air, road and ferry connections.

The biggest issue, though, is not the price tag of the sweeping, clamshell-shaped station, built in western Kowloon near shopping malls, apartment towers and a new arts district. More troubling to many is that in the heart of Hong Kong, mainland Chinese law will hold sway over 26 acres of floor space in the station, an area slightly larger than Yankee Stadium.

[…] The granting of mainland jurisdiction is a subtle yet powerful way to undermine Hong Kong’s unique status, said Victoria Hui, an associate professor of political science at the University of Notre Dame in South Bend, Ind.

“Instead of sending bullets into Hong Kong, they’re sending a bullet train,” she said. [Source]

Hong Kong’s Basic Law renders mainland authorities enforcing their laws in the semi-autonomous region illegal, and this new provision for enforcement, however contained, has added to increasing anxiety over the future of Hong Kong’s self-determination. AFP reports further on opposition to the bill from the public and from pro-democracy members of the legislature. Over the past two years, several pro-democracy lawmakers have been barred or removed from office, seriously limiting the veto power of that camp.

Long-running opposition against the proposals reached a head on Thursday evening, with about 200 people demonstrating outside the Legislative Council against the bill.

“The Basic Law can no more provide protection to Hong Kong people. Our freedom is in danger,” said one pensioner who gave his surname as Wong.

[…] Holding up slogans during a debate ahead of the vote, angry opposition lawmakers accused the president of “crippling the legislature” and ceding Hong Kong to the mainland.

“There’s been every sign that the legislative and the executive branches are conniving together to sell out Hong Kong lock, stock and barrel,” said pro-democracy lawmaker Claudia Mo. [Source]

More from the Hong Kong Free Press’ Holmes Chan, who notes that pro-democracy lawmakers are considering a judicial review of the bill:

Secretary for Transport and Housing Frank Chan welcomed the bill at the legislature moments after it passed, saying the rail link will be a “strong foundation for cooperation between Hong Kong and the mainland” and provide “infinite business opportunities for the younger generation.”

Chan was interrupted by pro-democracy lawmakers who shouted “Shame on Frank Chan” as they tore up copies of the bill.

“This is the darkest day in LegCo in recent years, probably since the Tsoi Yuen village protest [in 2010]. Tonight we saw an unconstitutional bill being violently passed, and we also saw the Legislative Council president cooperating with pro-establishment lawmakers,” Mok said. […] [Source]

Concerns over mainland authorities illegally operating undercover in Hong Kong were stoked in 2015, after the disappearances of five Hong Kong booksellers and publishers who later turned up in detention in China. Read more about alarm over the Beijing’s increasing assertion of authority in Hong Kong, and the associated deterioration of the rule of law and protection of human rights in the region, via CDT.