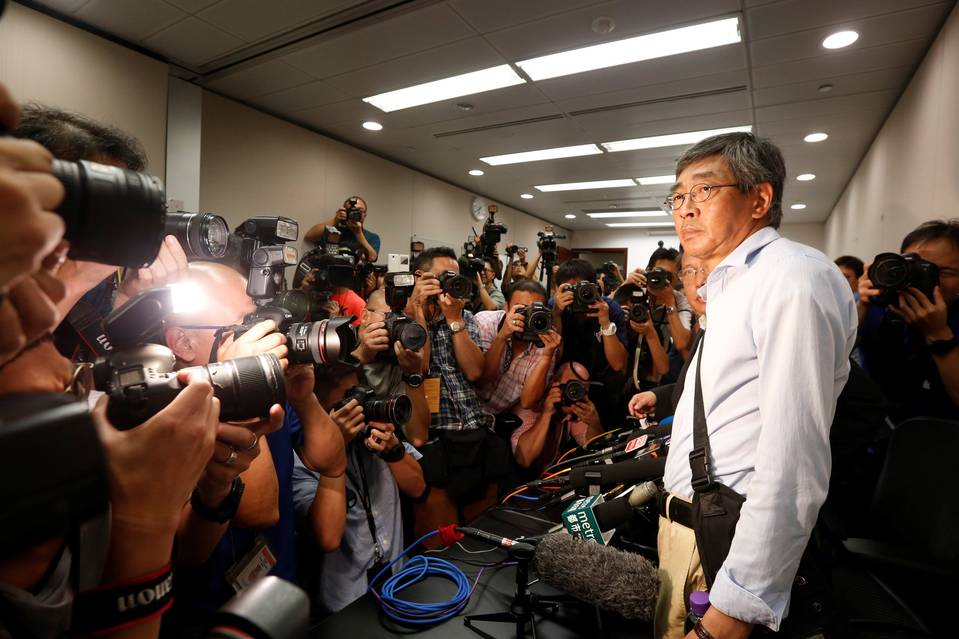 Hong Kong bookseller Lam Wing-kee was among five people who are associated with the Hong Kong-based Mighty Current publishing house who disappeared from China, Hong Kong, or Thailand and were later discovered to be in police detention in China. Lam is the fourth to be released back to Hong Kong, while one, Gui Minhai, remains in detention. While the others have largely avoided speaking publicly about their experience in China, Lam has given a press conference at Hong Kong’s Legislative Council describing how he was detained, interrogated, and forced to confess to crimes he doesn’t believe he committed. Lam said that he was willing to speak out because he was the only one of the five that doesn’t have family on the mainland, and therefore has less at risk. Ng Kang-Chung, Owen Fung, and Phila Siu report for the South China Morning Post:

Lam described in explosive detail how he was taken away, blindfolded and handcuffed by Chinese agents while crossing the border to Shenzhen last ­October.

Two days after quietly returning home and asking local police to drop their missing person investigation into his case, the 61-year-old Hongkonger was defiant, breaking a silence that had been maintained by three of his colleagues who were earlier allowed to leave by mainland authorities.

The Causeway Bay Books store manager said he had decided to risk his personal safety in speaking out because this was a matter that jeopardised the “one country, two systems” policy under which Hong Kong is ­governed.

“This is not just about me. This is about the freedom of Hong Kong people. The Chinese government has forced Hong Kong people into a dead end,” Lam said, his fists clenched. [Source]

Lam had founded Causeway Bay Books, which was bought in 2014 by Mighty Current publishing house, known for its publication of salacious political titles that are banned in China. The books are especially popular among mainland customers. Some observers have speculated that the detentions may be related to the planned publication of a book titled “Xi Jinping and His Lovers.”

Four of the five detainees, including Lam, were paraded on Phoenix Television allegedly confessing to crimes, including “illegal book selling.” But Lee told reporters that his confession was coerced and scripted. From BBC:

Mr Lam said a confession broadcast on Chinese television in February, featuring four of the men, had been scripted.

“It was a show, and I accepted it,” he told a news conference on Thursday, according to the South China Morning Post.

“They gave me the script. I had to follow the script. If I did not follow it strictly, they would ask for a retake.” [Source]

Q: How was the interview on Phoenix TV conducted?
A: I don’t know about the others. But for me there was a director, a script.
Q: Which parts (of the script) were contrary to your true beliefs ?
A: They said I had committed crimes, that’s already against what I thought. I don’t think I committed any crimes.
Q: During the interview, you admitted the books were all made up and expressed regret, are these not your words?
A: These are the things they made me say. They wanted me to admit them. I couldn’t not admit them. [Source]

Lam told reporters that he underwent 20 to 30 interrogations, lasting 30 to 45 minutes each, all without a lawyer present. He also said he was not detained by regular Chinese police but by a “special unit,” according to a report by Kris Cheng of Hong Kong Free Press:

Lam told reporters on Thursday that he was detained by a “central special unit”, a term he had not heard since the Cultural Revolution.

“I am a Hongkonger, I am a free man, I did not break any law in Hong Kong, but I was arrested without any reason [at the beginning],” he said. [Source]

As a condition of Lam’s release, he was required to return to China to provide a hard drive with records of Causeway Bay Books customers. But at the press conference, Lam said he was too afraid for his safety to return. From AFP:

He was supposed to return to the mainland on Thursday after being released on bail on Tuesday, he told reporters. However, he has decided not to return and instead to speak out about his case.

The condition of his bail was to bring back records of customers who had acquired books from the Causeway Bay bookstore that he managed.

Lam said he did not want to comply for fear that it would be seen as “selling out” the readers. [Source]

Gui Minhai, the co-owner of Mighty Current publishing house, remains in detention in China, and his daughter recently told CNN that his family has not yet been officially notified of his detention or had any contact with him.

Gui is a Swedish passport holder who disappeared while on vacation in Thailand. In January, Gui was shown on CCTV saying that he had returned to China voluntarily in order to turn himself in for a decades-old hit-and-run charge—but Gui’s colleagues and family cast doubt on the authenticity of his “confession.” Gui’s was one of several cases that raised concerns over the Chinese government’s apparent reach across borders to detain individuals traveling or living abroad.