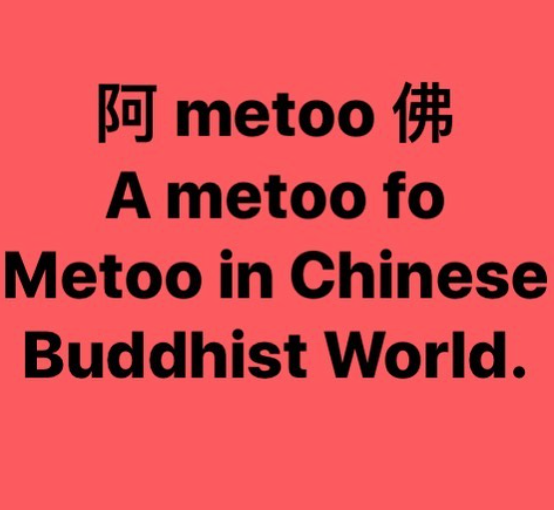 The Chinese incarnation of the #MeToo movement gained momentum last week after several well known figures in the public interest sphere were accused of rape or sexual assault, and accusations of harassment hit high-profile CCTV host Zhu Jun. CDT earlier this week translated a pair of leaked censorship directives which ordered all information on Zhu Jun to be deleted, and advised against hyping any content related to #MeToo. Allegations this week have come to light that Buddhist monk Shi Xuecheng, the abbot of Beijing’s Longquan Temple and the head of the Buddhist Association of China, has serially sexually harassed and assaulted nuns, leaving at least one of them suicidal. CNN’s Steven Jiang and Yong Xiong report, noting censorship of the leaked document containing the allegations:

[…] The document has accounts from a number of the alleged victims, some of whom say they were so devastated by their experiences they became mentally unstable or even suicidal.

According to the document, one victim eventually filed a police report in Beijing in June, alleging the abbot had sexually assaulted her and several other nuns.

[…] [While the abbot, sworn to celibacy, has denied all allegations] Shi Xianqi, one of the two monks behind the original document, which also includes allegations of corruption, told CNN on Thursday that he and co-author Shi Xianjia stand by their words and are cooperating with the authorities. […] [Source]

More details on the allegations contained in the 95-page document, and on the temple’s reinforcement of Shi’s denial, from the BBC:

The temple said in a statement posted on Weibo (in Chinese) that it would call for an investigation team to be set up, but stressed Xuechang’s denial of the charges.

[…] The report written by two monks at Longquang temple, Xianjia and Xianqi, accuses Abbot Xuecheng of sending illicit messages to the nuns and coercing them into sexual relations.

The report alleges that six nuns were targeted – four gave in to his requests.

It also accuses the abbot of using text messages to “mind-control” the nuns by claiming that sex was part of their study of Buddhist doctrines. [Source]

Coverage from AFP notes a lack of legal mechanisms to deal with sexual harassment in China, and runs through Shi’s credentials:

There is no legal definition of sexual harassment in China and no national regulations on how to handle sexual assault cases in schools and workplaces.

Abbot Xuecheng is a prominent personality in Chinese Buddhist life with a social media following of millions.

He heads the Buddhist Association of China and is also a member of the Chinese People’s Political Consultative Conference, a top advisory board.

Located on the outskirts of Beijing, Longquan Monastery has made headlines for combining Buddhism with modern technology, launching last year a two-foot high robot monk that dispenses mantras and karmic advice. [Source]

The allegations against Shi mark the first against a high-ranking and state-backed Chinese Buddhist for targeting female members of the clergy. However, according to a May report from the Tibetan Center for Human Rights and Democracy, Tibetan Buddhist nuns held in “political re-education” camps in Tibetan regions of China have been the targets of systematic sexual abuse. At La Croix International, writer and former spokesman of the exiled Tibetan government Sang Jieja describes the report, which is based on the observations of a monk who witnessed this while detained in a camp in Sog County of Nagchu district in Tibet and secretly passed them to TCHRD:

Most of those detained at the center were monks and nuns who were expelled from the Larung Gar Buddhist Academy or Yarchen Gar Buddhist Institute, he said. Both Buddhist training venues were demolished by the CCP.

According to the monk’s testimony, the aim was to “brainwash” them on political and ideological grounds by forcing them to memorize “red” (Communist) songs, make them undergo Chinese military training, and instructing them to criticize and denounce their peers and spiritual leaders, including the Dalai Lama.

The Chinese resorted to torture, the most egregious example of which was the molestation of Buddhist nuns, wrote the monk, who had been detained for several months when he penned his account.

[…] “A lot of the nuns would faint during their military training and the supervisors would rush them to their rooms. I saw them fondle their breasts and grope them all over,” he wrote.

“I heard some of the supervisors took advantage of the unconscious nuns in other ways back back at their rooms,” he added. [Source]

Abusive “political re-education camps” in nearby Xinjiang, where an anti-terrorism campaign has been in effect since 2014, have been the target of mounting international criticism.

On Twitter, the hashtag #阿metoo佛 is currently being used (h/t Li Maizi). The hashtag is a play on the Chinese pronunciation of Amitābha (āmítuófó 阿弥陀佛), the principal celestial Buddha in Chinese Pure Land Buddhism and a name often chanted in Chinese temples and monasteries.

Read more coverage of the #MeToo movement in China, via CDT, including a translation of feminist activist Li Maizi’s recent essay on why the public interest world needs a feminist education.