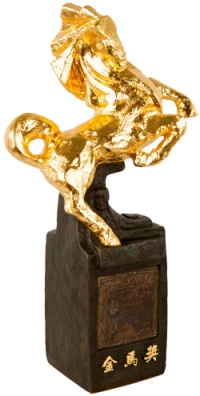 The heads of major film companies are reminded that in the future, all joint productions and domestic films will not be allowed to apply for the Golden Horse Awards. (November 19, 2018) [Chinese]

Last week, a firestorm erupted online after Taiwanese documentary filmmaker Fu Yue expressed hope that Taiwan would become “an independent entity” during her acceptance speech at the Golden Horse film awards. Live broadcasts of the ceremony were immediately shut down, and several mainland participants boycotted the remainder of the event. Chinese officials and celebrities have since condemned the comments and reiterated their position that Taiwan is part of China. Nectar Gan and Lawrence Chung report for the South China Morning Post:

On social media, mainland celebrities including actress Fan Bingbing shared an image of a map of China that included Taiwan and the “nine-dash line” with the hashtag “China, not even a dot can be missing”. The topic had been read 9 billion times by Monday evening.

The image was first posted by the Communist Youth League in 2016 to protest against an international tribunal ruling against China’s territorial claims in the South China Sea – represented by the “nine-dash line”.

Many mainland internet users even got around the Great Firewall to flood Fu’s Facebook page with thousands of indignant – and in many cases abusive – comments. [Source]

Becky Davis reports for Variety on the response in Taiwan:

In Taiwan, even President Tsai Ing-Wen commented on the brouhaha. “I’m proud of yesterday’s Golden Horse Awards – it highlighted how Taiwan is different from China,” she wrote Sunday on her Facebook page, which has more than 2 million followers. “Here, no one will disappear or be silenced for their differing opinions, nor will we block sensitive keywords on the internet.”

Ang Lee [head of award’s executive committee] told reporters after the show that “Taiwan is free and the film festival is open. You can say whatever you want to say….I hope that no one will come and interfere, that the Golden Horse Awards will be very pure. Please, everyone, respect the filmmakers.”

He added: “It’s such a good platform, it’s not easy to keep it going. We’ll do our best. I hope it can continue. [Source]

The Golden Horse Awards are Asia’s most prestigious film honors.