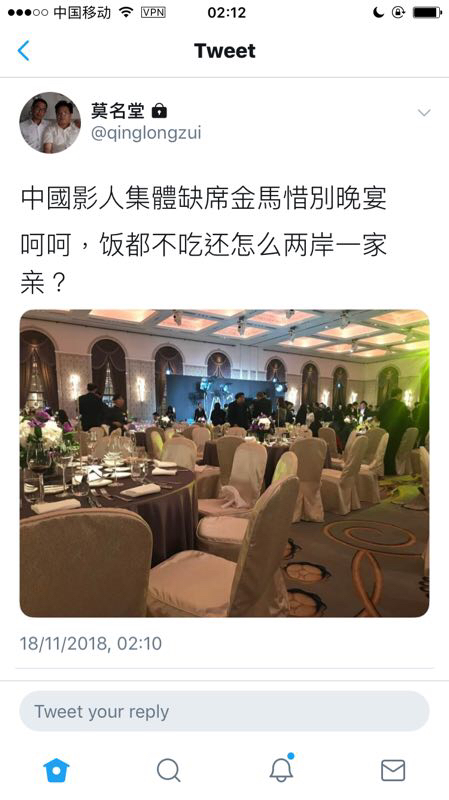 Regarding the Taiwan independence speech at the Golden Horse Awards ceremony, all websites must immediately cease live streaming and live broadcasts. (November 17, 2018) [Chinese]

At the annual Golden Horse award ceremony, Asia’s most prestigious film honors, director Fu Yue received an award for her independent documentary, “Our Youth in Taiwan,” which takes place during the Sunflower Movement. During her acceptance speech, she became very emotional and ended by saying that she hopes Taiwan will one day be treated as “an independent entity.”

Fu Yue’s parents are from Malaysia and Indonesia but she was born and raised in Taiwan. In her speech, she said: “Many people think this film is about politics, but actually it is about youth. Youth is wonderful, but youth is also the time when it is easy to make mistakes and to project the wrong expectations onto others. This mistake not only occurs between people to people, but also country to country. I hope my country can be treated as a truly independent entity. This is my biggest wish for me as a Taiwanese.” The ceremony, which was being broadcast live in China, was immediately cut off. Many of the mainland Chinese participants in the ceremony later boycotted the post-ceremony dinner.