The following instructions have been leaked and distributed online.

1. All internet commentary organizational work units must carry out comment flooding work at the relevant times, and must not finish it behind or ahead of schedule. The time period in question is from 8 pm to 10 pm tonight!

2. Comment flooding must be carried out in accordance with procedure. At the same time, take steps to protect yourself, and do not touch on the pandemic situation, pandemic volunteers, pandemic prevention policies, etc.

4. All personnel should keep their work confidential and avoid posting this notice to Weibo in the course of their comment-flooding activities. If any such posts are discovered, relevant work units will be held responsible! [Chinese]

This local directive to “comment flood” the Yili (or Ili) “Super Topic“ on Weibo follows a mass of online posts about the deprivations imposed on residents during the region’s 40-plus-day lockdown. On WeChat, censors struck down essays describing the harrowing chaos of the lockdown: expectant mothers denied essential medical care, feverish children barred from hospitals, an elderly man suffering a cerebral hemorrhage turned away from the ICU, disabled adults left unattended, and students’ educations interrupted. Many Yili residents feel their calls for help have gone unheard, in part because they are not allowed to speak up. As one resident explained in a WeChat essay that was later censored, referring to the Xinjiang region’s exceptional political sensitivity: “This place is a bit special. There are many things that cannot be said.”

Despite censorship and residents’ fears of speaking out, there has been an explosion of Weibo posts about Yili’s lockdown over the past few days. A now-censored accounting of those posts documented how a hashtag related to the Yili COVID outbreak appeared at one point in over 100 new posts per minute. One big-name blogger shared screenshots of the dozens of DMs she had received from Yili residents begging for help. Her post received nearly 40,000 comments. The Super Topic also filled with testaments to the emotional impact of seeing residents’ pleas for help. “Scrolling the Yili Super Topic for an hour has made me revise my worldview,” wrote one Weibo user. Even some normally staid government accounts began to post with unusual emotional intensity. Unlike other government Weibo accounts, which routinely close down or censor their comment sections, the Xinjiang Procuratorate’s official account vowed that it would refuse to do so: “Your Procuratorate swears it will not shut down the comment section. We stand forever with the people!” By censoring “negative news” and flooding social media with “positive energy”, authorities appear to be attempting to wrest back control over the narrative about Yili’s pandemic from those living through it.

CDT has archived a series of posts on the Yili Super Topic that netizens believe were part of the officially-directed comment flood:

This Weibo user locked their account when netizens accused them of “comment flooding” after they shared photographs of a Xinjiang culinary specialty. 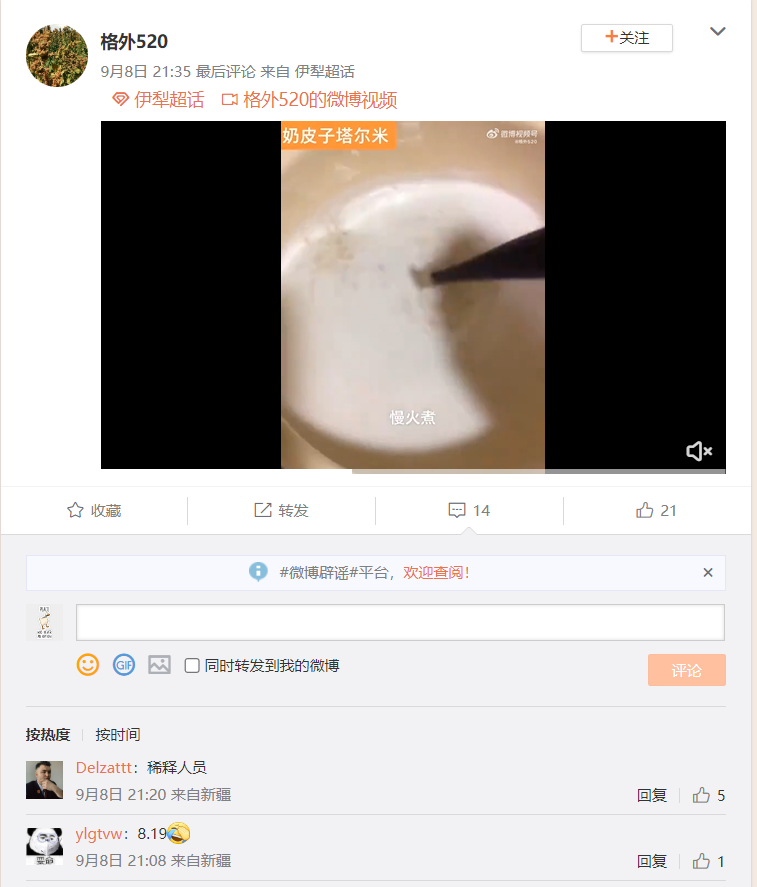 “All these posts about Yili scenery and food are coming from alternate accounts. Nice job, g*v*rm*nt. Have you ever heard of maintaining a shred of dignity?”

“All of today’s food posts are a political task. Everyone knows this, yet they still won’t let us comment.” [Chinese]