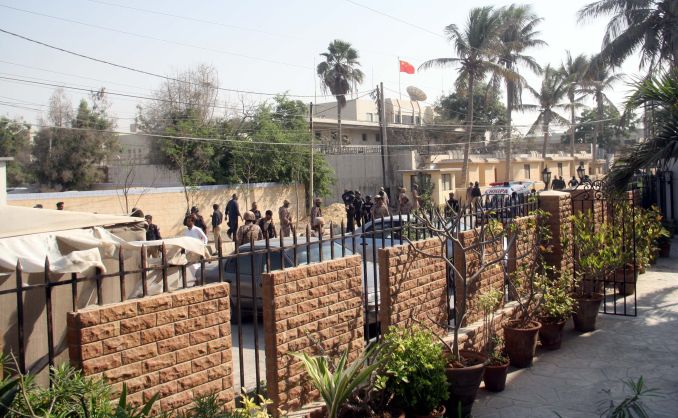 An attack on the Chinese consulate in Karachi, Pakistan last Friday has left at least seven dead, including the three militant attackers. The attack has been claimed by the Balochistan Liberation Army, a separatist organization that opposes Chinese investment in the China-Pakistan Economic Corridor, a crucial Belt and Road Initiative project that has sparked long-running security concerns. On Friday, the BBC reported on the attack:

Three gunmen tried to enter the consulate but were stopped by guards at a checkpoint, reports said. Two of those killed in the attack were police officers.

Eyewitnesses reported seeing a blast, and local TV channels broadcast images of a plume of smoke. There is a heavy police presence in the area which has been cordoned off.

All the staff inside the consulate are safe, China said. The government condemned the attack on its mission and the foreign ministry in Beijing called for extra measures to protect Chinese citizens in Pakistan.

“At the same time we mourn the deaths of the Pakistani police and think of their families at this time,” a spokesman said.

[…] A separatist group, the Balochistan Liberation Army, said it had carried out the attack. It is one of a number of separatist groups operating in the province, which has seen a long-running nationalist insurgency.

“We have been seeing the Chinese as an oppressor, along with Pakistani forces,” a spokesman for the group told the AFP news agency. [Source]

More details on the attack from Pakistani newspaper Dawn:

Defence analyst and security contractor Ikram Sehgal, whose company’s guards have been posted at the consulate, said that the attackers engaged in an exchange of fire with policemen.

After the policemen were martyred, he said, the attackers proceeded towards the gate of the consulate. However, the guards were quick to usher civilians with consular business into the building and shut the gates behind them.

[…] Deputy Inspector General (DIG) South Javed Alam Odho told AFP that at least one attacker had been wearing a suicide vest which did not detonate.

Police and Rangers began a combined operation in the area, and the Bomb Disposal Squad began conducting a sweep to ensure there are no more explosive materials in the area. [Source]

Last May, Dawn reported (via CDT) on a leaked long-term plan on CPEC, which kindled regional security concerns and also heightened global worries over Beijing’s efforts to use the BRI to legitimize its autocratic approach to governance.

Chinese-funded and -staffed construction projects in the region have been targeted by militants in recent years, most recently three Chinese engineers were injured in a suicide bombing on a bus–another attack claimed by BLA. Last year, a Chinese couple believed to be on a religious missionary trip were kidnapped and killed in Quetta, Balochistan.

At the South China Morning Post, Murtaza Solangi reports on the BLA and its militant opposition to Chinese investment in the Balochistan region:

The exact numerical strength of the BLA is not known. Most analysts agree that the group comprises several hundred members who operate in the province of Balochistan as well as neighbouring Afghanistan. Until now, the group’s biggest targets have been the Pakistani military and workers hailing from other provinces, mostly Punjabis. Pakistani authorities have routinely blamed India for supporting the BLA and other Baloch militant groups, which New Delhi has denied.

[…] While the BLA and other militant groups do pose a security threat, they are not seen to have the wherewithal to defeat the Pakistani military or run over the province. Nevertheless, they remain a serious impediment to the development of the China – Pakistan Economic Corridor (CPEC), the crown jewel of Beijing’s Belt and Road Initiative in Pakistan. The CPEC is supposed to run through Balochistan to end in the deep seaport of Gawadar, providing the shortest land and sea route between China and the Persian Gulf. [Source]

China and Pakistan have enjoyed close relations since the modern nations’ early days, and leaders have been known to refer to Pakistan as an “all-weather friend.” In 2014, then Pakistani Prime Minister Nawaz called the friendship with China “sweeter than the sweetest honey,” and in 2016 Chinese foreign policy analyst Yan Xuetong referred to the South Asian nation as China’s only real ally. At CNBC, Nyshka Chandran reports on Beijing’s defense of its strategic alliance with Pakistan and continued investment in CPEC after the attack, and notes Chinese donations to support the families of the Pakistani security officers who died in the attack:

The bilateral alliance is “higher than (the) mountains and deeper than (the) sea,” Lijian Zhao, deputy chief of mission at the Chinese Embassy in Islamabad, said on Twitter days after the terror attack. “The friendship has never been empty talks, but deeply imprinted in hearts of Chinese and Pakistani people,” Zhao said, noting how Chinese civilians made donations to the families of Pakistani security officers who died on Friday.

[…] Meanwhile, social media users in China expressed their respect and admiration for a female Pakistani police officer, Suhai Aziz Talpur, who was part of a team that killed Friday’s assailants.

[…] Beijing, however, appeared unfazed by these security concerns.

“We believe that the Pakistani side is able to ensure the safety of Chinese institutions and personnel in Pakistan,” the Chinese Embassy in Islamabad said in a statement. “Any attempt to undermine China-Pakistan relationship is doomed to fail.” [Source]

Immediately following the attack, Beijing condemned “any violent attacks against diplomatic agencies and requests that Pakistan takes practical measures to ensure the safety of Chinese citizens and institutions in the country.”

At the Nikkei Asian Review, Adnan Aamir reports on Islamabad’s struggle to contain anti-Chinese sentiment in Pakistan, noting the difficult situation national leaders are in as they seek Beijing’s help to ease domestic financial stress:

The attack on the Chinese consulate in Karachi last week is a sign that the Pakistani government may be struggling to contain anti-China sentiment at an awkward time when it is asking Beijing for financial assistance to avert a balance of payments crisis.

[…] Prime Minister Imran Khan is certainly in a difficult position, as his government is trying to ink a deal with Beijing for a huge financial bailout. Pakistan needs $12 billion to avert a balance of payment crisis. Islamabad has secured $6 billion from Saudi Arabia and Khan has been knocking on the doors of China and the United Arab Emirates for bilateral loans.