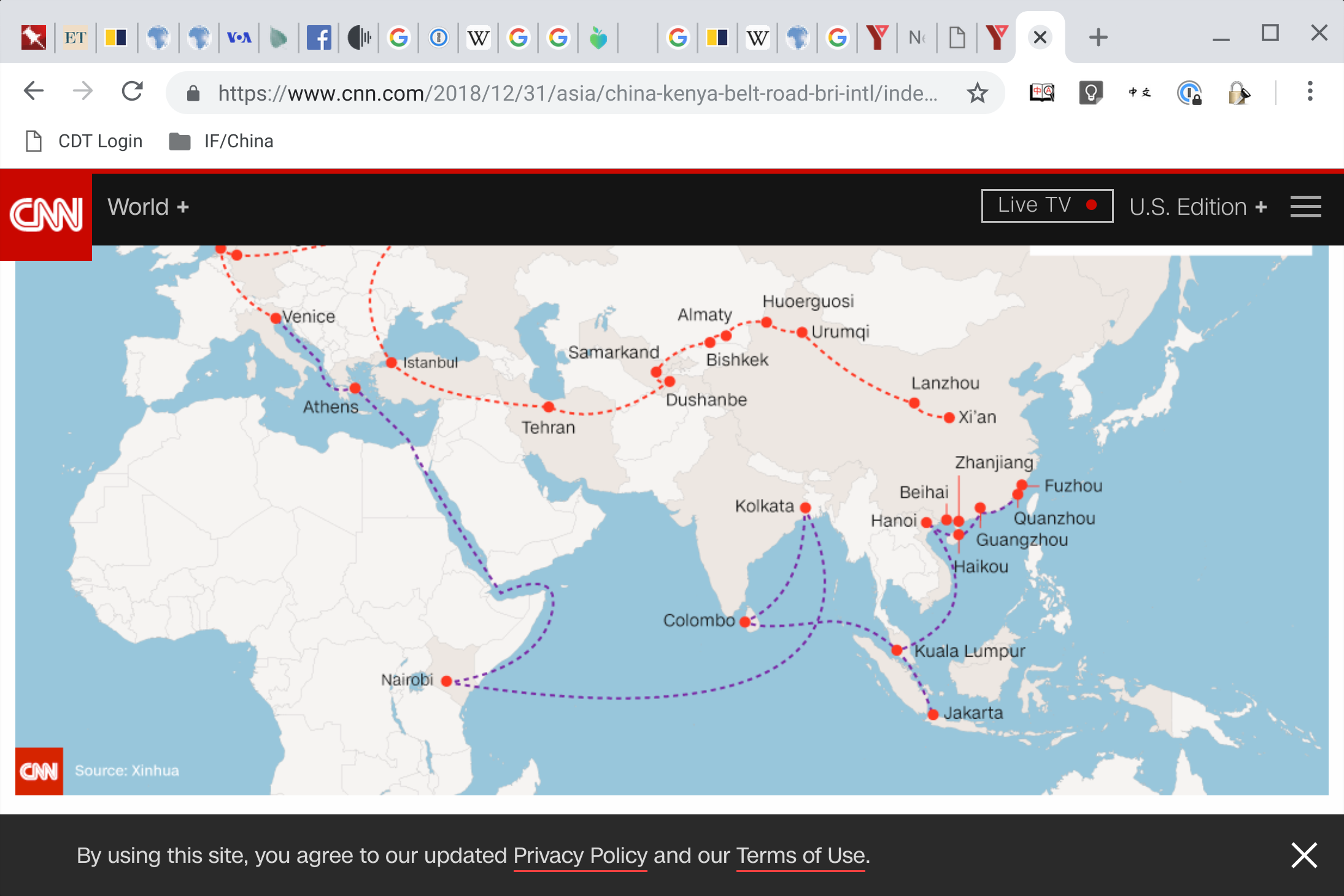 A recent exposé by Kenyan newspaper the Daily Nation details a host of risks to Kenyan sovereignty and national resources inherent in a loan agreement highly favorable to China signed with the state-owned Export-Import (Exim) Bank of China in May 2011. Such risks had last month been cited in media reports as an example of growing controversy over Xi Jinping’s ambitious infrastructure inestment plan, the Belt and Road Initiative (BRI). Included among the risks alleged to come with the Standard Gauge Railroad (SGR) loan are Beijing’s possible seizure of critical resources such as ports and airports should Kenya default; Chinese law governing the pact; all relevant arbitration being handled by Beijing; and a confidentiality clause barring Nairobi from detailing citizens about the deal without direct written permission from China. Following the January 13 release of his original exposé, the Daily Nation’s Edwin Okoth summarizes the major points in a report that Kenyan officials are struggling to save face in the wake of the revelations:

The loan contract Nairobi entered into with Beijing has several clauses that heavily favour China and compel Kenya to make many compromises, with the most controversial one being the waiver of sovereignty on assets.

Sovereign lending deals do not usually include the offering of collateral by the borrower, which explains why China’s angling for Kenyan national assets has puzzled many within and outside government.

[…] Because of the collateral clauses, Kenya’s cash-rich parastatals and firms risk Chinese takeover in case of a default.

Among them is the Mombasa-headquartered Kenya Ports Authority, whose exposure risk was recently the subject of an audit query by the Auditor-General. […] [Source]

Kenyan President Uhuru Kenyatta, who has been friendly with Beijing since taking office, last month dismissed criticism of the deal’s risk as “pure propaganda,” and according to reports has similarly dismissed the recent exposé. China’s Foreign Ministry has also waved off earlier questions about the deal being a debt trap.

A report from Voice of America contextualizes the “debt-trap diplomacy” on display in the SGR loan with other active Chinese international infrastructure loans under the BRI:

The Nation didn’t reveal how it acquired the contract, nor how it determined its authenticity.

But language in the document closely matches contracts VOA uncovered for projects tied to the Belt and Road Initiative, China’s trillion-dollar global infrastructure plan, in Serbia, Kyrgyzstan and Guyana, suggesting the terms of the Kenya loan, from asset seizure and confidentiality clauses to stipulations about using Chinese vendors, may reflect Bejing’s lending practices across Africa, and beyond. [Source]

More on how the collateral clause has recalled unease about the BRI from the South China Morning Post’s Kristin Huang, who cites a relevant example:

The prospect that China might at some point be able to seize Kenya’s prized port of Mombasa has caused public confusion and alarm and again raised questions about the risks of participating in China’s “Belt and Road Initiative”.

[…] The country’s current debt to China is understood to be about US$9.8 billion, which has funded large chunks of national infrastructure, including a number of highways and the Standard Gauge Railway (SGR) which provides a high-speed connection between Mombasa and Nairobi, the country’s capital, to facilitate the import and export of goods.

[…D]espite Chinese President Xi Jinping saying the initiative was “an open and inclusive process, and not about creating exclusive circles or a China club”, the belt and road project has been criticised by many as a tool used by Beijing to encourage dependence on China.

[…] In July, 2017 Sri Lanka agreed to lease the Hambantota Port to China Merchant Port Holdings for 99 years for US$1.4 billion to settle unpaid debts to China.

The port, which was built with Chinese money borrowed by Sri Lanka, is now in Chinese hands. [Source]

Close Kenya ally, neighbor to Sri Lanka, and longtime BRI critic India is reportedly watching the situation in Kenya closely. Earlier this month, a report showed that China had in 2016 offered its political leverage be applied to quash international probes into a local scandal in Malaysia in exchange for BRI-related contracts, another episode attracting further critique to Xi’s massive initiative.