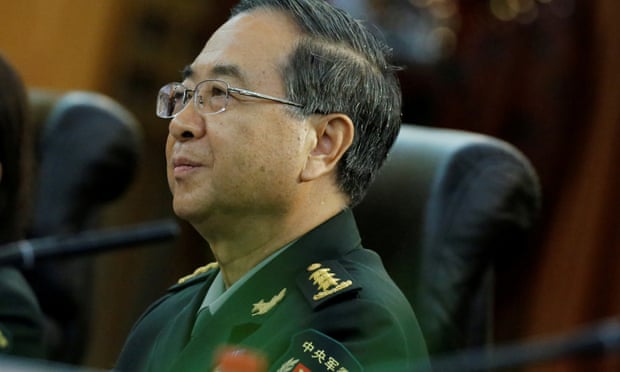 A military court has sentenced Fang Fenghui, former chief of the Joint Staff Department of the Central Military Commission–China’s central military command–to life in prison for corruption. Fan becomes one of the highest-ranking military officials to be felled by Xi Jinping’s signature anti-corruption campaign. The BBC reports on Fang’s fall:

Fang Fenghui, ex-chief of joint staff of the People’s Liberation Army, was found guilty of bribery and having huge wealth that he had been unable to account for, according to Xinhua.

[…] Fang Fenghui lost his post with no explanation in 2017 and disappeared from public view. The government later confirmed he was under investigation for alleged corruption.

He was also a member of the powerful Central Military Commission, China’s supreme military body, and was close to Zhang Yang, who also served on the commission and was found dead in 2017 while being investigated for corruption.

Fang was expelled from the Communist Party last year ahead of his trial at a military court. [Source]

Read more about the investigation into Zhang Yang and his subsequent suicide, via CDT. At The Wall Street Journal, Chun Han Wong puts Fang’s fall into the context of Xi’s use of his anti-corruption campaign to reinforce control over the People’s Liberation Army, and notes state media’s coverage of the former military chief over the past year:

Mr. Fang is among dozens of senior military officers purged over the past six years as Mr. Xi has sought to assert control over the politically influential PLA and impose a far-reaching modernization program that has also unsettled some career soldiers who fear losing influence and jobs. Many of their replacements are widely regarded by military-affairs specialists as more professional and loyal to Mr. Xi, who has fashioned himself as a resolute defender of China’s sovereignty.

State media first disclosed the case against Mr. Fang a year ago, months after he disappeared from public view in the fall of 2017. In addition to his command of the Joint Staff Department, Mr. Fang was also a member of the Communist Party commission that oversees the armed forces. He was later stripped of his rank, discharged from the military and expelled from the party.

While disclosing Mr. Fang’s expulsion in October, party authorities denounced him as a greedy “two-faced person” who was dishonest and disloyal to the party. At the time, the party said Mr. Fang’s wrongdoings were “extremely severe” and involved “especially huge” sums of money. [Source]

Xi has pledged to continue the anti-corruption crackdown, which since 2012 has brought down 1.5 million party officials, including top military leaders.

Corruption has long been an intractable problem for the country, but many experts argue that the campaign has the hallmarks of a political purge as the Chinese president consolidates his power.

Xi has sought to enhance his control over China’s 2 million-strong military, the world’s largest, reshuffling its leadership and vowing to make it “world-class” by 2050.

The military was ordered to pledge to be “absolutely loyal, honest and reliable to Xi” in new guidelines released by the Central Military Commission in 2017. The CMC is chaired by Xi. [Source]