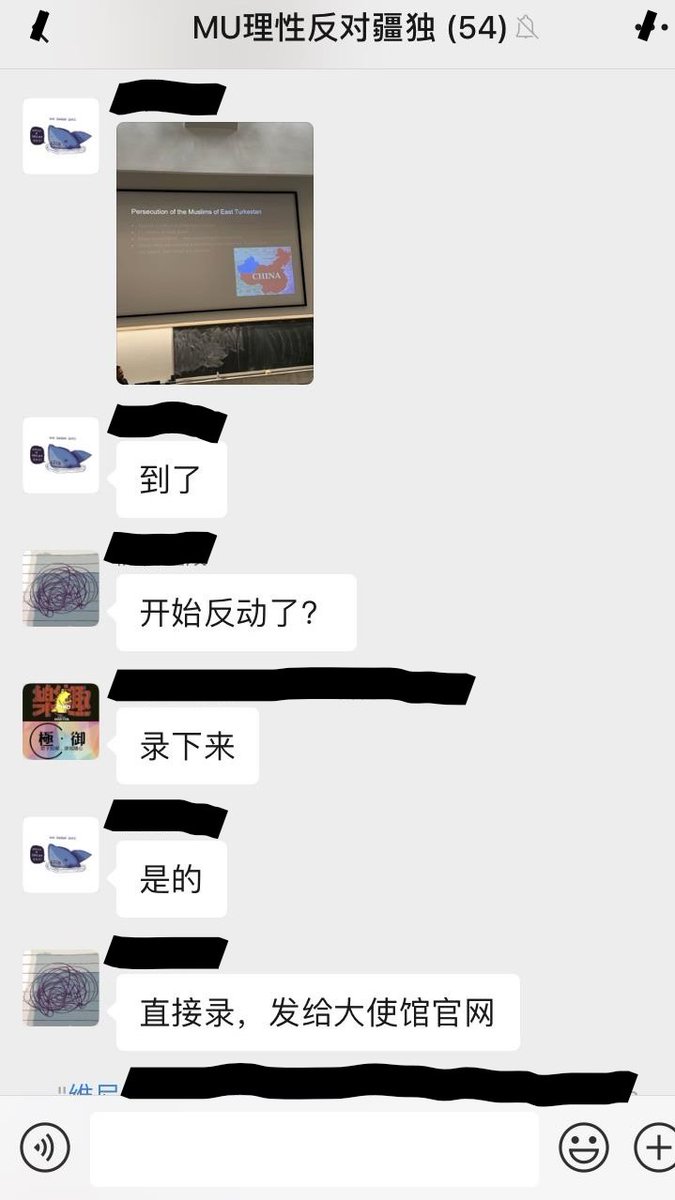 This week Uyghur activist Rukiye Turdush gave a presentation at Ontario’s McMaster University about the current conditions in Xinjiang, where more than one million Uyghurs and other Turkic Muslims have been detained in re-education camps, at the invitation of the Muslim Students Association and Muslims’ for Justice and Peace. During the talk, Chinese students organized on WeChat to videotape her and later communicate with the Chinese Consulate about the talk, providing information about Turdush and other attendees and organizers.

One group of Chinese students at McMaster took it upon themselves to organize via WeChat prior to the event, to attend & take photos and video. They then said in the WeChat group that they planned to send this material to the Chinese embassy. Screenshots from WeChat group below: https://t.co/6F7Fd8vSrE

Gerry Shih and Emily Rauhala report for the Washington Post about the incident:

A group of Chinese students at McMaster University, in Ontario, learned that Rukiye Turdush, a vocal critic of the Chinese government’s treatment of Uighurs, was set to deliver a presentation about the mass internment of Muslims in China’s far northwest.

The students were furious that a woman they considered a separatist would be given a platform to speak. So they rallied in a chat group and reached out to a familiar source of guidance: the Chinese government.

As Turdush gave her presentation that afternoon, a student in the audience filmed her, and later shouted at her before storming out.

Students wrote in a WeChat group that they contacted the Chinese Embassy about the event and were told to see whether university officials attended and whether Chinese nationals had organized the talk. They later wrote that they sent photos to Chinese officials. [Source]

The students wrote on WeChat that they sought guidance from the embassy. They wrote that the embassy advised them to watch who attended the presentation. Then, they wrote, they sent pictures back to Chinese officials.

Turdush responded to the incident in a video:

At the same time as the McMaster incident, Chemi Lhamo, a Tibetan student at University of Toronto Scarborough, was harassed by Chinese students during and just after her election as student body president. CBC reports:

By noon, her phone was buzzing incessantly with notifications. But instead of messages of congratulations, Lhamo — a Canadian citizen of Tibetan origin — realized a photo she’d posted on Instagram for the Lunar New Year was attracting thousands of hateful comments, most rife with anti-Tibet sentiment, some threatening.

“China is your daddy — you better know this,” read one comment.

[…] That wasn’t all. A petition calling on Lhamo to step down had amassed nearly 10,000 signatures.

And there was a message on the Chinese mobile service We Chat making the rounds, calling on Chinese international students to stop Lhamo from becoming president.

The message, posted by the account Ladder Street, said: “The U of T student union is about to be controlled by Tibetan separatists.” The message also says Lhamo shouldn’t benefit from the millions of dollars brought in each year by Chinese students. [Source]

For Inkstone, Viola Zhou and Grace Tsoi report on Lhamo’s background and ongoing harassment she has faced for her stance on Tibetan identity:

Lhamo, a neuroscience and psychology major, grew up as a refugee in India, where some Tibetans run a government in exile. After moving to Canada, she has been active in promoting Tibetan culture and identity.

On Instagram, she has posted photos of Free Tibet rallies, the Dalai Lama and the snow lion flag of Tibet – which is used by the exiled Tibetan government, and banned in mainland China.

Since Lhamo’s election to the Scarborough Campus Students’ Union made headlines in China, her Instagram page has become a battlefield for Chinese nationalists and Tibetan independence supporters, as users attack each other with insults and racist slurs.

Lhamo said she had been receiving direct messages and comments on Instagram such as “you should go die” and “we are going to make sure your life will be like hell.” [Source]

In 2017, CBC profiled Lhamo and her activism in the local Tibetan community in Toronto:

Over the course of that conversation with her mother, Lhamo learned there were thousands of Tibetans living in India after fleeing the Chinese occupation of their homeland.

Lhamo learned too just how privileged she was — and that she was in a position to give back.

That’s when she decided she wanted to do more to contribute to her own Tibetan Parkdale community. It wasn’t long before she started an internship with the Tibetan Canadian Cultural Centre.

During her several years with the organization, Lhamo has helped launch the Tibetan Youth Alliance Committee, aimed at empowering young Tibetan Canadians through mentorships, community events and promoting cultural preservation.

“It all goes back to my Buddhist traditions, the values of wisdom and compassion going hand-in-hand, learning about how to be happy, internally happy,” she said on Metro Morning. [Source]

Both recent incidents further elevated existing concerns about involvement of Chinese consulates in monitoring and directing the behavior of Chinese students in universities overseas. Tom Blackwell reports for the National Post:

The two episodes come amid increasing concern about Beijing’s attempts to extend influence into countries like Canada, helped by some of the thousands of Chinese citizens who attend colleges and universities here.

President Xi Jinping has in recent years greatly expanded the size and power of the Communist Party branch at the forefront of China’s soft-power efforts. Experts say both the Confucius Institutes based at many Canadian post-secondary institutions and leaders of the Chinese scholars and students associations at most of the schools, report to government officials.

Though there is no direct evidence of it, Lhamo said she believes the petition and the comments on her Instagram page are at least partly the work of Chinese diplomats.

“I was a little surprised, but seconds after reading some of the comments I realized this was probably a tactic by the Chinese government,” she said Thursday. “This looks very orchestrated. We’ve seen enough of this stuff to know it’s not coming out of nowhere.” [Source]

This example from @McMasterU is significant because it is proof that the Chinese embassy in Toronto is actively monitoring the behavior of Chinese international students at Canadian universities and keeping track of who goes against party core interests.

Although fear may play a role, my impression is their acts are more influenced by China's toxic internet culture. Reporting to police is so prevalent during heated online discussions. They bring this kind of toxic habits to the West.

With an increasing number of Chinese students attending university in the West, conflicts have arisen as those students learn to navigate new ideological landscapes. The Chinese government has been known to use organizations like the Chinese Students and Scholars Associations, which exists on many college campuses, to wage influence campaigns through Chinese students abroad. In 2017, University of California, San Diego faced protests from Chinese students after inviting the Dalai Lama to speak on campus. Suspicion was expressed by academics that the CSSA at UCSD was acting on guidance from the local Chinese consulate. While such conflicts are increasing in frequency, they are not new. In 2008, Duke student Grace Wang was subjected to harassment and threats after trying to mediate a conflict between pro-Tibet and pro-China groups on campus. After the recent incident at McMaster University, a debate arose among China watchers about what the penalty should be for students studying abroad who provide information about fellow students at the behest of Chinese government authorities.

While some Chinese students in universities around the world have participated in protests and harassment like that directed at Lhamo and Turdush, others have spoken out against such behavior and offered support for the human rights causes being discussed. From an open letter signed by members of the Independent Federation of Chinese Students and Scholars:

We strongly denounce these Chinese students’ efforts to stymie free speech and suppress the truth about the ongoing genocidal crimes committed by China’s murderous regime. We ask US, Irish, Canadian, French and Dutch authorities to protect Uyghur and Tibetan students and scholars from intimidation on campus and guard their citizens of Uyghur and Tibetan backgrounds against foreign threats at home. We also urge relevant law enforcement agencies to look into possible criminal violations in these incidents and investigate any Chinese government ties that may have manipulated some Chinese student organizations into such violations. [Source]

"There’s Chinese opposition [to Xinjiang camps] too."
Hmm did American observers just discover this today?
Numerous posts discussing and condemning the situation get deleted on weibo and wechat, meaning ppl are trying to talk abt it despite risks (some got admin detention).