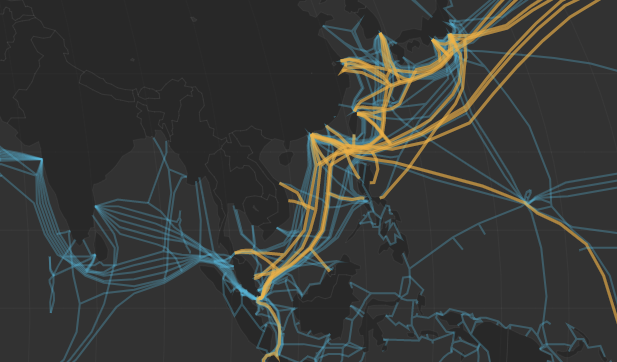 The security of national 5G mobile data networks has been a key battleground in the ongoing tensions between China and the United States. Chinese telecom giant Huawei has been caught in the middle like “a tomato,” in the words of its founder Ren Zhengfei, with the U.S. recently going so far as to threaten a halt to intelligence cooperation with countries which allow the company’s involvement. While much attention has focused on the future of networks within countries, relatively little has fallen on the connections between them. This week, The Wall Street Journal’s Jeremy Page, Kate O’Keeffe, and Rob Taylor reported on parallel concerns about Huawei’s role in expanding the global submarine cable network.

Altogether, [Huawei Marine] has worked on some 90 projects to build or upgrade seabed fiber-optic links, gaining fast on the three U.S., European and Japanese firms that dominate the industry.

These officials say the company’s knowledge of and access to undersea cables could allow China to attach devices that divert or monitor data traffic—or, in a conflict, to sever links to entire nations.

[…] Joe Kelly, a Huawei spokesman, said the company is privately owned and has never been asked by any government to do anything that would jeopardize its customers or business. “If asked to do so,” he said, “we would refuse.”

[…] Industry representatives and some experts say most security risks in the undersea cable system can be mitigated. While submarine cables can be physically cut or disabled, technology makes it more difficult to intercept data undetected, said Kent Bressie, legal adviser to the International Cable Protection Committee, an industry group that includes Huawei Marine.

[…] A research institute attached to China’s Ministry of Industry and Information Technology, in a paper published in September, praised Huawei’s technical prowess in undersea cable transmission and said China was poised to become “one of the world’s most important international submarine cable communication centers within a decade or two.” China’s foreign and technology ministries didn’t respond to requests for comment. [Source]

The article quotes an executive involved in a London-New York cable serving the financial industry, from whose construction Huawei was excluded in 2013 under American pressure. The executive claimed that U.S. concerns were “camouflaged as a security risk, but it was mostly about a preference for using U.S. technology.” At the New York Times this week, Yamanashi Gakuin University’s Yi-Zheng Lian argued that “the United States may be hoping to protect the interests of American tech companies, but that doesn’t mean it’s wrong about the threat of Chinese spying.” He goes on to describe Huawei’s obligations under Chinese law, which (as in the quote from spokesman Joe Kelly above) both the company and Chinese authorities have repeatedly dismissed. These denials have received some support but also met widespread skepticism, as a CDT round-up last week illustrated. In particular, several commentators have argued that, in China’s political context, the law is far from the deciding factor.

The New York Times also focused on the submarine cable network this week with a lavishly illustrated feature describing the changing state of the industry and the painstaking process of laying cables. The article is headed by an animated map showing the explosive global proliferation of undersea data cables since 1989.

Nearly 750,000 miles of cable already connect the continents to support our insatiable demand for communication and entertainment. Companies have typically pooled their resources to collaborate on undersea cable projects, like a freeway for them all to share.

But now Google is going its own way, in a first-of-its-kind project connecting the United States to Chile, home to the company’s largest data center in Latin America.

“People think that data is in the cloud, but it’s not,” said Jayne Stowell, who oversees construction of Google’s undersea cable projects. “It’s in the ocean.”

[…] Countries view the undersea cables as critical infrastructure and the projects have been flash points in geopolitical disputes. Last year, Australia stepped in to block the Chinese technology giant Huawei from building a cable connecting Australia to the Solomon Islands, for fear it would give the Chinese government an entry point into its networks.

[…] Demand for undersea cables will only grow as more businesses rely on cloud computing services. And technology expected around the corner, like more powerful artificial intelligence and driverless cars, will all require fast data speeds as well. Areas that didn’t have internet are now getting access, with the United Nations reporting that for the first time more than half the global population is now online. [Source]

For more on undersea cables, see a concise collection of videos and historical imags at 99% Invisible. For much more, see genre-bending fiction author Neal Stephenson’s 42,535-word 1996 epic for Wired Magazine, “Mother Earth Mother Board.” The article explores the construction of the Fiberoptic Link Around the Globe, or FLAG, then “set to be the first big cable, as well as the first modern Internet connection, into China” on its way from Britain to Japan. The strategic value and vulnerability of undersea cables goes much further back:

If you believe Tom Standage that the early telegraph network constituted the first internet, then this, in 1914, was the world's first cyberattack

(from the book "Castles of Steel") pic.twitter.com/dSKffHR65n