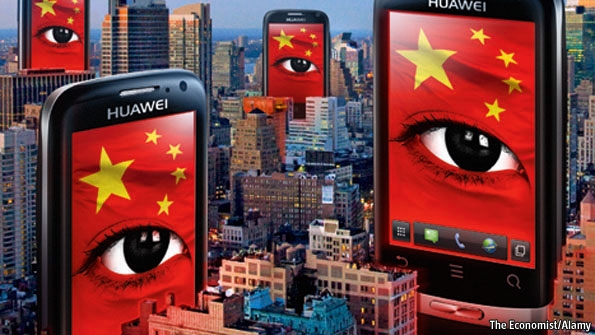 After Canada arrested Huawei CFO Meng Wanzhou in December for possible extradition to the U.S., China detained over a dozen Canadians in apparent retaliation. This included former diplomat and now senior International Crisis Group (ICG) advisor Michael Kovrig, and Paektu Cultural Exchange founder Michael Spavor, both under suspicion of harming national security. Another Canadian, Robert Lloyd Schellenberg, was “arbitrarily” sentenced to death during a one-day retrial for drug smuggling charges. Now, just two days before Meng is due to face her extradition hearing, Beijing has accused Kovrig of conducting espionage since 2017, and Spavor of providing him intelligence. For CNN, Steven Jiang and Ben Westcott report:

In a statement described as a “major development” in the case, former diplomat Michael Kovrig was accused of gathering and stealing “sensitive information and other intelligence” in China since 2017.

Businessman Michael Spavor is accused of providing intelligence to Kovrig, and is described as an “important contact” for the former diplomat.

“Kovrig’s alleged behavior of gathering and stealing secrets and other intelligence for a foreign power has seriously violated Chinese laws,” the statement said.

[…] In response to Monday’s revelations, ICG spokesman Hugh Pope told CNN that Kovrig’s “work for Crisis Group has been entirely transparent and in the open, as all who follow his work can attest.”

“Vague and unsubstantiated accusations against him are unwarranted and unfair,” Pope said. [Source]

Over the weekend we were wondering how Beijing might respond to #Canada proceeding with the extradition hearing for senior Huawei Exec Meng Wanzhou and here you go Canadians Michael Spavor and Michael Kovrig accused of working as a team to "steal state secrets" here in #China. https://t.co/ZFQxYtF6yL

For the Guardian, Lily Kuo details Beijing and Ottawa’s responses to the unfolding saga:

Canadian diplomats have been allowed to see the two men. People familiar with the case have said Kovrig has not been allowed access to lawyers or family members, unlike Meng. Kovrig, who works for the International Crisis Group, focusing on north-east Asia, has denied any involvement in espionage.

The Canadian prime minister, Justin Trudeau, said: “We are obviously very concerned by this position that China has taken. It is unfortunate that China continues to move forward on these arbitrary detentions.”

Canada said China had not made a specific link between the detentions and Meng’s arrest, but experts and former diplomats believe Beijing is using their detentions as a way to put pressure on Canada.

[…] The Chinese commission said on Monday the next judicial proceedings would begin in due course and stressed that Kovrig’s and Spavor’s “lawful rights would be ensured”. [Source]

For more on the new accusations on Kovrig and Spavor, see a CBC broadcast.

Meng, who faces up to 30 years in prison if convicted under the Justice Department’s criminal charges of bank and wire fraud, is suing the Canadian government, border agency, and federal police for being searched and interrogated without an attorney present. Reuters reports:

In a civil lawsuit filed in the British Columbia Supreme Court on Friday, Meng’s lawyers said the manner in which officers obtained evidence and information from Meng constituted serious violations of the Canadian Charter of Rights and Freedoms. Meng is the daughter of Huawei’s founder.

It added that Canadian Border Services Agency (CBSA) officers deliberately delayed the immediate execution of an arrest warrant and unlawfully subjected Meng to detention, search and interrogation to extract evidence from her before she was arrested.

[…] The lawsuit further alleged that Meng was directed to surrender all her electronic devices, computers and passwords and that CBSA officers then unlawfully opened and viewed the contents of the seized devices in violation of her right to privacy.

CBSA officers also searched Meng’s luggage in violation of the right to privacy, the lawsuit said. “The CBSA Officers knew or were recklessly indifferent to the fact that they had no authority to conduct such a search, which search was performed under the false pretense of a routine customs or immigration related examination,” according to the lawsuit. [Source]

For CNN Business, Sherisse Pham details how Meng’s attorneys believe she was intentionally misled to surrender her passwords:

After Meng got off a flight from Hong Kong, officers from the Canada Border Services Agency stopped her and told her to surrender all her electronic devices, which included “two personal cellphones, an iPad, and a personal computer,” according to the lawsuit. Officers later asked for the devices’ passwords, which Meng surrendered believing she had no choice as the officials “intentionally failed to advise her of the true reasons for her detention, her right to counsel, and her right to silence.”

Only after searching and questioning her did the border officers turn her over to the Royal Canadian Mounted Police (RCMP), which formally arrested her.

As a direct result of the detention, Meng suffered damages including mental distress, anxiety and loss of liberty, the lawsuit says. She has severe hypertension, for which she was hospitalized after her arrest.

He urged the US government to withdraw the arrest warrant and extradition request for Meng, and the Canadian government to immediately release her. [Source]

An opinion essay at Bloomberg asks whether suing Ottawa would further damage Huawei’s already compromised global public image. Meanwhile, The New York Times has revealed that Huawei is also planning to sue the U.S. for banning its products from federal agency use:

The lawsuit is to be filed in the Eastern District of Texas, where Huawei has its American headquarters, according to the people, who requested anonymity to discuss confidential plans. The company plans to announce the suit this week.

The move could be aimed at forcing the United States government to make its case against the Chinese equipment maker more publicly. It is part of a broad push by Huawei to defend itself against a campaign led by the United States to undermine the company, which Washington sees as a security threat. Executives have spoken out strongly against America’s actions, and new marketing campaigns have been aimed at mending the company’s image among consumers.

[…] The lawsuit against the United States is expected to challenge a section of a defense spending authorization law that was approved last year. The provision blocks executive agencies from using telecom equipment made by Huawei and another Chinese company, ZTE.

According to one of the people familiar with the matter, Huawei is likely to argue that the provision is a “bill of attainder,” or a legislative act that singles out a person or a group for punishment without trial. The Constitution forbids Congress to pass such bills. [Source]

When Meng is scheduled to appear in court on March 6, the proceedings will “confirm that a writ of court has been issued and schedule a date for the extradition hearing,” according to AFP. At The Wall Street Journal, Kim Mackrael and Jay Greene explore what might unfold after Meng’s extradition hearing:

Canada said Friday the U.S. had presented enough evidence to proceed with the extradition hearing for a Huawei Technologies Co. top executive, clearing the way for a case at the center of tensions between the U.S., China and Canada.

[…] Court decisions on extradition don’t determine a person’s guilt or innocence, but are based instead on whether the evidence would be sufficient for a trial to move forward in Canada, said Joanna Harrington, a law professor at the University of Alberta.

If the courts rule that there is enough evidence to proceed with Ms. Meng’s extradition, Canada’s justice minister would have the final say on whether she is surrendered to the U.S. Requests by the U.S. for extradition from Canada are rarely denied once they reach that stage, Ms. Harrington said.

Unless Canadian or U.S. authorities drop the case, Ms. Meng could remain in Vancouver for years while the claims against her make their way through the Canadian legal system. Indian financier Rakesh Saxena fought extradition from Canada for 13 years before he was sent to Thailand to face trial in 2009. [Source]