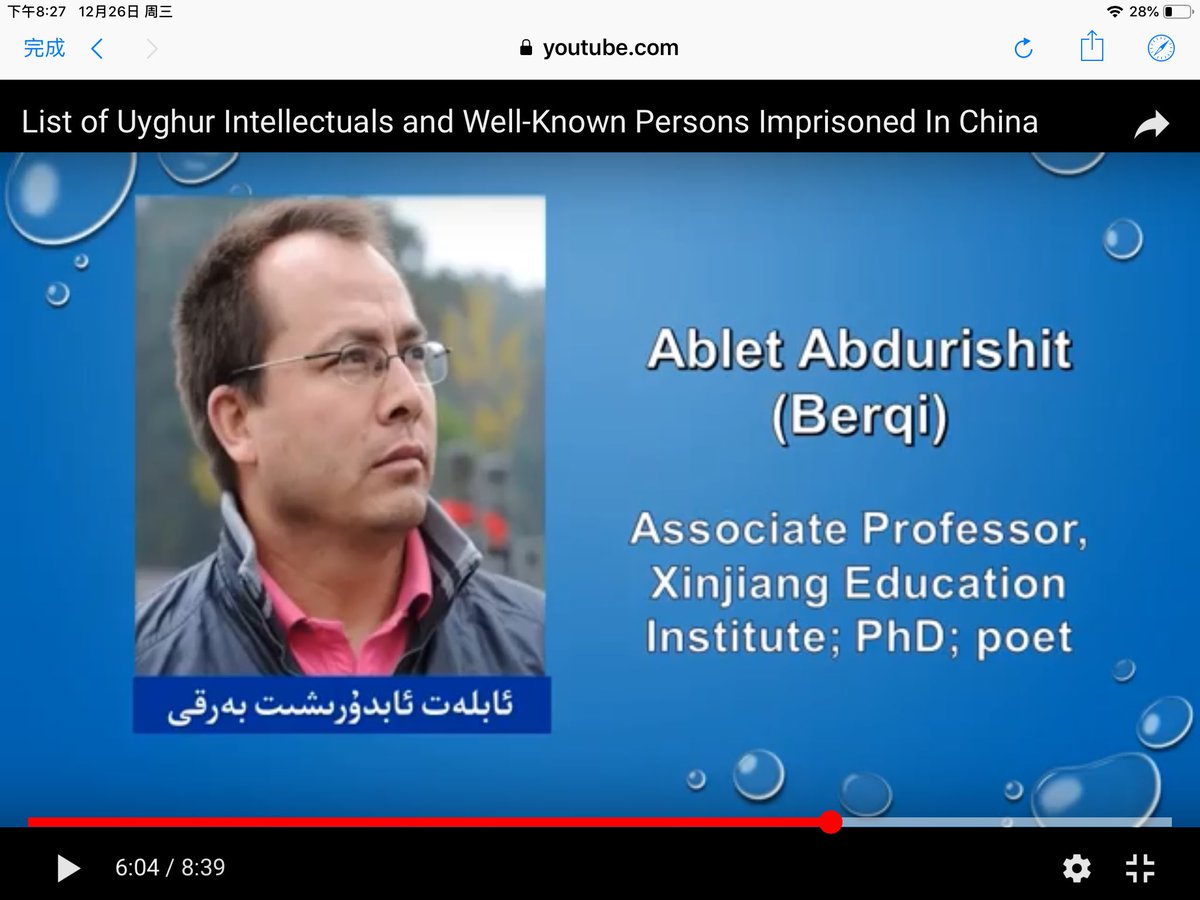 The following excerpts, translated by Anne Henochowicz, come from an essay written by Tang Danhong. Uyghur poet and scholar Ablet Abdurishit Berqi, also known by the pen name Tarim, has since 2017 been one of hundreds of Uyghur intellectuals–themselves part of a group of Uyghurs and other ethnic minorities as large as two million–currently detained in a series of internment camps in Xinjiang. See also three of Tarim’s poems, or an interview Tang Danhong conducted with Tarim’s former professor Nimrod Baranovitch, both translated by CDT.

Introduction: Tarim is the pen name of the poet Ablet Berqi, a reference to the Tarim Basin and its Uyghur inhabitants. He is one of the many Uyghur cultural elites who have been detained in “re-education camps.” Tarim writes mainly in Uyghur, a Turkic language. In 2016 he went to Haifa University in Israel, where he studied 20th century Uyghur literature under Professor Nimrod Baranovitch in the Department of Asian Studies. During this time, he befriended Tang Danhong, a Chinese poet living in Israel. These are the poems he wrote in Chinese which he shared with Tang. Tarim went back to Xinjiang in the second half of 2016. When Tang learned that Tarim had been captured, she wrote an essay about her brief connection with him, titled “Tarim, A Uyghur.” The American Sinologist Anne Henochowicz has translated Tarim’s Chinese-language poems, as well as the following excerpt from Tang’s essay.

[…] It was a bright and beautiful day. We had walked 15 kilometers along a section of the Israel National Trail. Tarim wore brown leather shoes, not the best for hiking, but the rainy season had ended not long ago and the earth was still supple and dustless. We walked across carpets of newly-green grass and gravel roads, we climbed to the top of a hill, we climbed down, we passed through vibrant brush, we passed a Christian relic, we passed pilgrims from Europe… As I write this, why is it that those two striding feet always appear before my eyes? Tarim from “Xinjiang,” a farmer’s son from a desert oasis, had passed the university entrance exam in his native language, then he’d gone on to his masters degree, his doctorate, become an associate professor, and come to Israel for a two-year postdoc, all while wearing those brown leather shoes. Those shoes were well-made. They hadn’t lost their shape in all this travel, and they didn’t have too many mud stains. They could still follow Tarim to the library for research, to meetings with his professor, or they could follow him back to the lecture hall in Urumqi, and on to his doorstep, where they would be neatly placed next to the rug…No, it’s not about those shoes, it’s about the owner of those shoes. He once walked freely in a foreign land, but now—the owner of the shoes has lost his freedom.

Tarim, Ablet Berqi, who wore brown leather shoes, studied Uyghur literature in Israel; who once walked with us in the sacred wilderness; who took off his shoes to go through airport security, and remembered herding sheep and the grass on his bare feet; who was turned away from a hotel in Zhengzhou, and ate an apple under the night sky; who didn’t pursue independence [for his homeland], because he didn’t want to see bloodshed again; who urged me to be “a little bit milder” in my writing, “if the words are too sharp they could invite hatred.” Who read about the expired vaccine scandal in Shandong on his WeChat feed and wrote a not-pointed allegorical poem about it. Who gave me a collection of his poems titled “Poetry, My Refuge”…

“The poems I write in Uyghur are mostly about love. I like to write poems about feelings, about love…” Tarim used his native language to write about love, to write about the woman he loved. I haven’t read his love poems yet. I’m waiting for him to translate them into Chinese. Are there verses about gently caressing her skin? Are there verses about the warmth and fragrance of her body? Are there verses about whirling long hair? There must be. No matter the language, when you write about love, it’s pure, it transforms into limitless beauty. But those women whose heads have been shaven, those women whose skin festers with sores, those women bound to steel beds in terrible postures… Those are also the women Tarim praised in his poems, ravaged into non-humanity. No language can describe the suffering of the flesh. Only the flesh of the victim knows, only screams tell their story, the sobs of blood…

When people put on orange vests and yellow vests*, when people sing red songs and recite quotations again, a new language is given life, a variation on my mother tongue, a hard, stiff, mechanical language, a deranged command playing a major role in human history and the “two centenaries” of the Chinese Communist Party and the People’s Republic. Purge your mother tongue with my mother tongue. My mother tongue cannot speak of this shame…

You’re forced to sing its praises every day

and you cannot leave it

and you cannot ignore it

The short lines of Tarim’s poem “Gray Love” come from memory, from menace, and perhaps also from premonition: When the wealthy merchants and the businessmen are arrested and sentenced one after the other, there’s no room for being “good at trade,” no simple answer like “giving up resources.” I’m convinced that the poet Tarim, who has “developed education,” Ablet Berqi the associate professor at the Xinjiang Education Institute, has been sent to a “concentration camp for educational transformation.” This scholar of Uyghur literature who conducted postdoctoral research at Israel’s top university, what kind of “educational transformation” is he being put through?

Chen Quanguo, the Communist Party secretary of Xinjiang, has said it’s “like the instruction at school, the order of the military, and the security of prison. We have to break their blood relations, their networks, and their roots.” […]

On a scorching summer day, Tarim came to Tel Aviv from Haifa. In a few days he would go back to Urumqi. I invited him to come say goodbye and once again prepared Sichuan cold noodles for him. He had already unfriended me on Facebook. He said he couldn’t eat, he was busy, and had to hurry back to Haifa. He didn’t even stay for twenty minutes. I can’t even remember, did he sit down? Did he have a glass of water?Yet this farewell shook me to my bones:

He said, “Maybe when I get off the plane, before I enter the airport, they’ll take me to a separate room and beat me up, and I’ll disappear.”

Looking at my shocked face, he then said, “And maybe nothing will happen…”

His expression was sincere. To be honest, the Tarim I saw rarely smiled. Still, layer upon layer blocked my powers of comprehension: he’s a poet, a writer, and a scholar. He’s an associate professor at the Xinjiang Education Institute. He can get a passport and come to Israel for advanced studies. When he goes back he’ll have an offer from Sichuan University to be a professor of literature…I asked, “Beat you up at the airport? Disappear? On what grounds?”

“That’s how Xinjiang is,” he said without any surprise in his voice. “When a Uyghur comes back from being abroad, that can happen.”…

As soon as he’d said all this he left, rushing to catch the train back to Haifa. […] [Chinese]