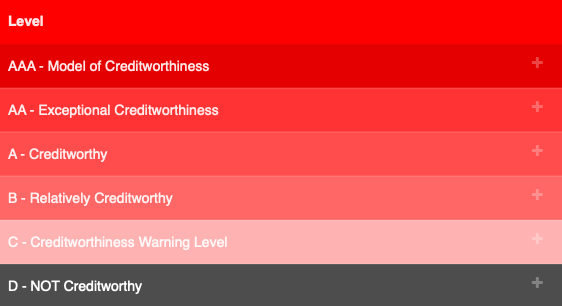 The central government began mulling plans for a social-credit system early this century, says Rogier Creemers of Leiden University in a paper on the topic. It was responding to rising public anger over officials’ failure to curb the dishonesty that had become rampant in many walks of life: everything from fraud and academic plagiarism to shoddy construction and the selling of dangerous fake goods. In a blueprint published in 2014 the government said the project would involve centralising data that it holds on citizens and businesses (the document set out broad plans for the years until 2020, but did not specify exactly what would be in place by that date). The authorities are issuing every company and organisation a social-credit registration number. For firms, this will replace the panoply of numbers they use to identify themselves to various agencies, such as the tax bureau and industry regulators. There is no known plan to create a system such as [Suqian’s] Xichu Points at the national level by giving all citizens a score based on their day-to-day behaviour.

For now the data being collated nationally are being put to use in two main ways. The first is to aid the development of a financial credit-rating industry. This will probably result in a financial scoring-system similar to those widely used in other countries. The second is to tighten the enforcement of existing laws. China’s police can respond rapidly to perceived threats to the party’s grip. But in other domains the state’s power is more limited. People commonly fail to pay workers, defy court orders or default on debts by decamping to other provinces or starting new businesses in different industries.

The blacklists are supposed to remedy this. Since 2013 the judiciary has been compiling the names of people who have defied a court order, for example by failing to pay debts or fines, or to issue an apology to an injured party. In 2016 other departments agreed to help penalise these people by preventing them from buying plane or bullet-train tickets or staying in luxury hotels, as well as joining the civil service, taking senior jobs in state-owned firms or starting companies in the food or drugs industries. More than 12m people are on this blacklist; they have been denied more than 17m plane tickets and 5m for bullet trains. They will remain on the list until courts are satisfied they have complied with orders. [Source]

In addition to his paper and accompanying Twitter commentary, Creemers has also taken part in discussion of social credit on the Sinica podcast, and produced a video talk accessibly summarizing the current state of the national scheme, noting the absence of unified scoring or big-data number crunching.

Also cited by The Economist (pointing out that "the only way to land on [national blacklists] is by breaking the law, not by accumulating ‘bad credit’") is Yale Law School’s Jeremy Daum, whose recent podcast, two-part Q&A at China Law & Policy, and ongoing compilation of materials and analysis at China Law Translate are also key resources. In a recent blog post, Daum examined the prominent local scheme in Rongcheng, Shandong, having previously posted an interactive quiz showing readers how their own scores might be calculated under the city’s system.

In past writing on social credit, I’ve avoided in-depth discussion of point systems because I don’t believe they are central to social credit, despite the media’s fascination with them. Instead, they are more of an eye-catching publicity device meant to raise awareness about issues of trustworthiness. While sometimes problematic, they don’t really add much in terms of meaningful rewards or punishments, and most people in places that do have point systems seem able to ignore them entirely without consequence.

[…] Still, because so much attention has been given to point systems, and because Beijing has hinted it might roll one out in the near future, I wanted to take a look at how Rongcheng’s score system actually works. In doing so, I have found that while there is no ‘panopticon’ or even significant new data collection involved, the scoring seems unnecessarily complicated and may invite additional government intrusion into people’s lives.

[…] As you look through the grounds for subtractions, notice that they are all violations of existing laws, regulations, or contractual legal obligations.

[…] Concern about China’s social credit system [has focused] on fears of invasion of privacy use of advanced technologies to profile and control citizens.

To this end, it’s worth noting that the list of actions that reduce or lower points in Rongcheng is comprehensive and lengthy, but always involves straight addition and subtraction. There is no meta analysis algorithm or complicated formula, just straight addition and subtraction linked to specific conduct. While I made a survey to simulate scores, the real system relies primarily on data produced by the government in giving out administrative punishments and commendations, with additional reporting from social organizations and volunteers. [Source]

While Daum and Creemers have extensively studied the emerging social credit ecosystem itself, others have focused on its public reception. What’s On Weibo’s Manya Koetse, who took part in the Sinica discussion together with Creemers, has written about the tone of social media commentary and news coverage. At The Washington Post last month, meanwhile, the Freie Universität Berlin‘s Genia Kostka described the findings of her own more quantitative investigations. Her surveys and interviews suggest overwhelming support, particularly among wealthier, more educated, and older Chinese, for corporate, local, and especially central government social credit schemes as a means of tackling “a general lack of trust in Chinese society.”

But do social credit schemes actually push Chinese to clean up their online and offline behavior? Respondents indicated they changed their behavior in only a few categories such as mobile payment use, online shopping and adhering to traffic regulations.

It’s possible this limited reach reflects low public awareness that citizens’ actions are under scrutiny. Only 7 percent of respondents were aware they were part of a local government social credit system. Though more than 80 percent of respondents knew they were part of a commercial social credit monitoring program, the survey’s findings suggest that the purported benefits were not particularly important — quite a few citizens were unaware of their Sesame Credit score.

[…] Our findings suggest that public opinion in China is, for the moment, positively inclined toward social credit schemes — though official Chinese media reporting and the limited room for critical debates on surveillance and privacy issues may help foster these rosy impressions.

These attitudes could shift if social credit programs — and the national social credit rollout — begin to embrace a broader set of punitive measures and restrictions. [Source]