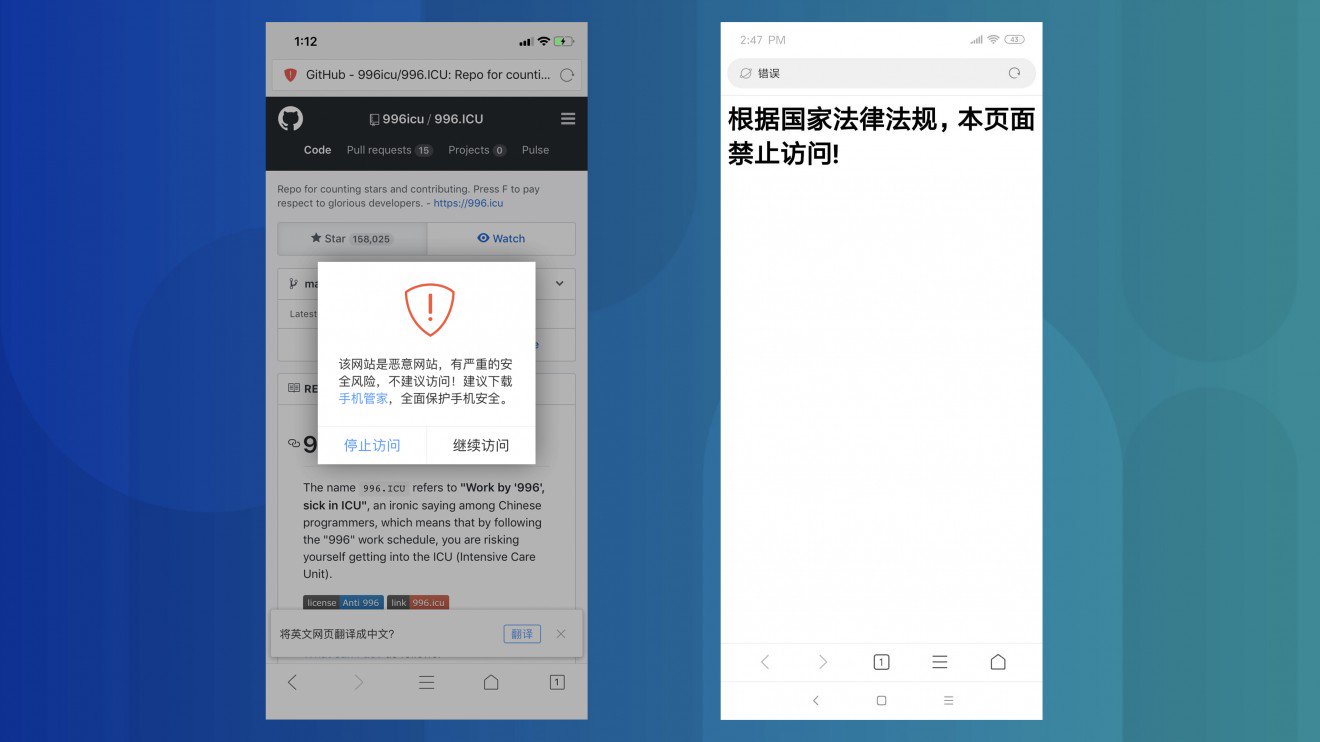 Chinese programmers are coming together through a viral Github campaign to protest against gruelling hours that characterize the work culture of the Chinese tech industry. The GitHub repository titled 996.ICU–a reference to the 9 AM to 9 PM six-day work week and the health risk it poses to workers–has become one of the fastest growing repositories on the code-sharing site. Cate Cadell at Reuters reports:

An anonymous activist launched project “996.ICU” on GitHub last week where workers share examples of excessive overtime and vote for the top blacklisted companies as well as firms with better working conditions.

“What’s the difference between these 996 companies and the old landlords who oppressed peasants???” said one post.

Alibaba Group Holding Ltd, JD.com Inc and drone maker DJI Technology Co Ltd were among the blacklisted firms. Alibaba did not immediately respond to a request for comment on Friday, a public holiday in China.

Although the anti-996 campaign comes amid growing demands for workers’ rights and calls for greater union representation across other industries, the 996.ICU’s GitHub page explicitly states that the campaign “is not a political movement.” Organized labor rights advocacy is subject to an ongoing government crackdown, with a number of student activists arrested over the past year for supporting factory workers.
Xue Yujie at Sixth Tone looks at some of the stories of long working hours and shared grievances that IT workers have brought against China’s biggest tech companies:

“I’ve quit at ByteDance, to boycott 996 start with me,” commented one netizen in the repository, referring to the parent company of short-video app TikTok. “[This forum is] the blood and sweat of 100,000 coders,” commented another. Still more netizens on Maimai, a LinkedIn-like professional network, claimed that 996 wasn’t even the worst-case scenario — that some developers were working 10125 or even 007 schedules.

[…] A 28-year-old software engineer who asked to be identified as Eric told Sixth Tone that his previous employer had adopted a 910.57 schedule — 9 a.m. to 10:30 p.m., seven days a week. After toiling under this system for six months, Eric was diagnosed with a swollen prostate and a slipped disc, and his resting heart rate was over 100 beats per minute. Eric quit five months ago to recover his health and says he just won a lawsuit against his former employer for not paying him social insurance or overtime.

Eric shared a screenshot from a WeChat group of software engineers sharing the GitHub page and discussing their poor health. “When I saw the page I thought, ‘Yes! There’s finally someone speaking out,’” he said. “China’s internet companies don’t treat us programmers like human beings.”

At China’s startups and tech companies, working long hours is often the norm. A 2016 report from ride-hailing platform Didi Chuxing shows that at some of China’s biggest internet companies, the work doesn’t end until well into the night: The average clock-out time at JD.com is 11:16 p.m., compared with 10:50 at Tencent and 9:24 at Didi. [Source]

In response to the campaign, some locally developed web browsers, including those created by Tencent and Xiaomi, have blocked access to the anti-996 GitHub repository. The page is accessible through foreign browsers such as Chrome. Xinmei Shen at Abacus News reports:

A number of Chinese browsers, including Tencent’s QQ Browser, Qihoo’s 360 Browser and the native browser on Xiaomi smartphones, have restricted user access to the 996.icu repository on GitHub.

[…] QQ Browser presents a pop-up message telling users that they’re trying to visit a “malicious site” that contains “security risks,” but it will still let users access it if they click “continue visiting.” 360 Browser, on the other hand, completely blocks the site, saying it “contains illegal information.” Xiaomi’s browser and the lesser known 2345 Browser from a company in Shanghai show a message saying users are prohibited from visiting the site “according to national laws and regulations.”

International browsers appear to have no problems accessing the site in China, with users verifying they can access the repository through Google Chrome and Mozilla Firefox.

[…] So far, work on the project continues unabated. Developers have compiled a blacklist of companies with heavy hours and a list of those with healthier work hours, the latter comprising mostly of foreign companies in China. [Source]

The Verge’s Shannon Liao writes that the censorship efforts are probably not directed by the government:

Some of the companies that are reportedly blocking access to the GitHub repository are also the same ones being accused of encouraging their employees to work grueling 12-hour days, six days a week without sufficient overtime pay, a coincidence that Chinese developers have been quick to point out. Alibaba’s UC Browser was screenshotted as blocking the database and Alibaba’s name has come up in worker accusations. Alibaba did not respond to comment.

[…] One source told The Verge that the browser block could likely be the result of individual company decisions aimed at quashing criticisms, rather than an order from the Chinese government, as the block only targeted a single page rather than a full domain. A browser-level block of a single offending GitHub repository could be a clever way for Chinese tech companies to remove controversial material while the main GitHub platform stays accessible. It’s not an ideal situation for the companies if GitHub were to go down in China.

“GitHub is used widely by programmers in China for professional reasons. Getting browsers to block it — especially ones on mobile phones like Xiaomi — might be a way around this challenge,” explains Sarah Cook, Freedom House’s senior research analyst for East Asia. “It may be a way of limiting the negative political impact without incurring the collateral damage to IT innovation that a full block would impose.” [Source]

Given the importance of Github for tech companies around the world, the site serves as a strategic site for hosting the anti-996 campaign as it would be extremely difficult for either the government or individual companies to completely block the site without causing significant economic disruption, Shannon Liao reports in a separate article at The Verge.

It’s unclear who made the decision to track the complaints in GitHub, but it offers a unique level of privacy and censorship resistance to vulnerable workers. The site is a pivotal resource for tech companies in the US and China alike, providing access to a wealth of open-source code to build on. As a result, any effort to block the site could harm employers far more than employees. In 2013, when GitHub was blocked for several days, former head of Google’s Chinese operations Kai-Fu Lee came out to criticize the censorship, saying in a since-deleted Weibo post, “blocking GitHub is unjustifiable, and will only derail the nation’s programmers from the world, while bringing about a loss in competitiveness and insight.”

If 996.ICU were to be taken down, users can easily make backup copies of the repository beforehand. And even if GitHub is somehow censored, users can turn to similar services such as GitLab, says security researcher Victor Gevers, who works for the nonprofit organization GDI and has previously uncovered several Chinese databases. It’s also likely that GitHub will simply comply with any requests from the Chinese government.

“Github is owned by Microsoft. One little complaint from the Chinese government and that repository will disappear very quickly as Microsoft will do anything to keep the business relationship good,” says Gevers. Microsoft continues to operate in China and censors search results on its search engine Bing, in order to comply with local laws. GitHub did not respond to comment.

A number of anti-996 supporters are advocating for an open source licensing agreement that would prohibit a company from accessing open source software if it does not comply with local labor laws. From Motherboard:

Two 996.ICU supporters—Katt Gu, a PhD student at the University of Illinois, Urbana-Champaign and Suji Yan, CEO of tech company Dimension where Gu is lead counsel—crafted a license agreement that willing open source software developers can slip into their end-user license agreements (EULA). The license is designed to force a company using open source software to follow local labor laws, or else have its access to the software revoked.

[…] The pair envision the anti-996 license as a kind of trap that will force companies using open source software into compliance with local labor laws. Still, Gu and Yan don’t expect that companies caught unawares by the license will take it sitting down. [Source]