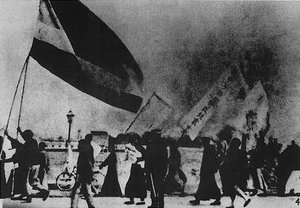 Saturday is the 100th anniversary of the 1919 May 4th Movement, sparked by China’s mistreatment in the Versailles settlement following the end of World War One. In keeping with broader efforts to enforce orthodox views of history, Chinese authorities have reasserted custodianship of the pivotal episode’s legacy, and taken steps to neutralize potential rival claimants. From Anna Fifield at The Washington Post:

Xi used [last] Saturday’s commemoration, and the specter of the much more sensitive anniversary in June, to exhort China’s young people to rally around the Communist Party of China and lead a patriotic life focused on the collective.

[…] “The great historical significance of the May 4th Movement shows that student campaigns can be promising only when they are integrated into a story of national rejuvenation and when they receive the correct guidance,” Zheng Shiqu, professor of history at Beijing Normal University, wrote in a commentary in the People’s Daily, the mouthpiece of the Communist Party.

[…] Authorities at universities across the country are on high alert. Handan University in Hebei province told department heads to “maintain a high degree of vigilance, be duty-bound, and never relax.”

“In the speech, President Xi said we are living in the best of times. But why would the government fear unarmed college students in such a golden age?” said a 20-year-old Peking University student and former Marxist club member, speaking on the condition of anonymity for her safety. “This is pure irony and a huge slap in the face of those who believed in the May 4th movement and the party state itself.” [Source]

CNN’s Eduardo Baptista, Yong Xiong, and Ben Westcott reported on the six most recent detentions, the latest in a series of aggressive moves against young Marxist activists.

Former president of the Peking University Marxist Society, Qiu Zhanxuan, announced on social media Sunday he planned to head to a well-known job market on the outskirts of Beijing, where thousands of migrant workers gather daily to find odd jobs.

[…] “If doing this kind of manual labor makes me disappear, everyone knows who did it,” he wrote on his social media.

On Sunday, while walking with four other students, Qiu posted pictures of six men who he said were plainclothes police officers following the group. Then the public posts stopped. The next day, an activist group associated with Qiu announced the five members were missing.

[…] Qiu and his group weren’t the only Peking University students to vanish in the past week either. On Sunday evening, student Shen Yuxuan sent messages to a friend saying she was being harassed by a group of policemen and security guards on campus. Shen was also associated with Qiu’s Marxist Society.

She hid in a bathroom, according to messages seen by CNN, but the male assailants broke in and dragged her out. She hasn’t been seen since, and her phone also appeared to be switched off. [Source]

David Cowhig has translated a longer account of the detentions and their context at his blog.

In a reflection at SupChina on the relationship between science and power since 1919, particle physicist Yangyang Cheng summed up the May 4th anniversary’s sensitivity:

It’s hard to overstate the significance of the May Fourth Movement to the course of modern Chinese history. The intellectual unrest of the scholar elite, combined with the spirit of mass uprising, directly contributed to the establishment of the Chinese Communist Party in 1921. The October Revolution that overthrew the Russian Tsar a few years earlier made the new theory of collectivism particularly appealing to those in China who had lost faith in the corrupt and dictatorial Nationalist government and were eager for new ideas to save their country.

[…] The movement of 1919 was important to the Party’s history, but its memory must be carefully culled. The free spirit of May Fourth was contradictory to the ideological dogma the government now imposed. Many of the movement’s central figures, like Chen Duxiu, had complicated lives that do not fit into a simplified official narrative. When the revolutionary becomes the dictator, it understands too well how its own path to power is a threat to the power it now holds. [Source]

In the 1930s, when students, supported by underground operatives of the C.C.P. (which was illegal then), took to the streets to demand that Chiang Kai-shek’s ruling Nationalist Party do more to protect China from Japan, they invoked the “May Fourth spirit.” The Nationalist Party also claimed that it best exemplified that spirit. The contest to appropriate the legacy of Wusi was on.

Come 1989, it was the leaders of the C.C.P. themselves — by then long in power — who were targeted by a fresh generation of students calling for a “New May Fourth Movement.”

[…] Under President Xi Jinping, the C.C.P.’s efforts to control the meaning of the Wusi protests have continued unabated. The movement holds a revered place in official chronologies, as a turning point and the start of modern times in China. The party, playing on the kind of national pride extolled back in 1919, boasts today that China no longer appeases, but leads, on the international scene.

[…] Official celebrations for the students of 1919 will take place this weekend across China — under the auspices of leaders who stand for many policies and values that those students opposed. They don’t seem to realize that the true spirit of Wusi lives on. [Source]

At Hong Kong Free Press, David Bandurski described the Communist Party’s current interpretation of the “May 4th Spirit,” expressed through “Six Hopes”: “formation of far-reaching ideals”; “ardent love for the great motherland”; “taking on the responsibility of the age”; “daring to struggle on”; “reaching mastery of abilities”; and “refining moral character.”

If we ask what values — aside from the narrow ideology of nationalism and fealty to the Party — should guide Chinese youth today, we are again told that the answer lies with Xi Jinping and the Party. An official commentary placed prominently at the top of the front page of today’s edition of the People’s Daily bundles the entire question of the May Fourth Movement into the political ideology of Xi Jinping and his recent articulation of his “Six Hopes” for the youth of China.

“To continue making full use of the spirit of May Fourth, and to take on the great task of national rejuvenation, [youth] must have a profound understanding of the Six Hopes raised by General Secretary Xi Jinping,” the commentary said. […]

[…] In Xi Jinping’s “Six Hopes” we see the “May Fourth spirit” trapped on the Möbius loop of Party ideology. All questions of value ultimately come down to the fundamental question of the Party’s legitimacy and dominance. And this question hinges on Xi Jinping as the “core” of the Party. [Source]

At Foreign Affairs, Dan Xin Huang similarly discussed how the occasion has been “sanitized into a reliable party talking point”:

Under Xi, the Communist Party has systematically strengthened its control over all aspects of Chinese civic life. At Peking University, the historic center of both the 1919 and 1989 movements, the state has fastened cameras to lampposts, built informant networks, and appointed, last fall, a new university president with sterling party credentials. May Fourth—modern China’s most potent symbol of national expression—has been stripped of its aspirations and sanitized into a reliable party talking point. On campus, a recent survey administered to select Beida graduate students tested their affinity to statements such as “[Xi is] a leader whose heart was forged by the noble struggle” and “Multiparty Western democracy is not suited to China.” One line of questioning appeared designed to root out subversives, gauging what respondents thought was embodied by “the May 4th Spirit” and whether “the youth should release its passion . . . and chase youthful ideals.”

The passions of Chinese youth have always straddled a fine and fluid line. At times they have been a force to be weaponized; since 1989, an impulse to be suppressed. The party has not been shy in showcasing the fates of those it deems to have gone too far. Last summer, security forces stormed an apartment of students and young labor activists in Huizhou, assembled to help factory workers organize for greater rights. Fifty members of the group were detained; several remained in custody into the new year—among them, two recent Beida graduates. Last November, the detainees’ classmates distributed flyers in university canteens but were met with general apathy, before police officers moved in to silence them. Since then, a half dozen more Beida students and alumni, along with many of their peers around the country, have quietly disappeared.

One hundred years ago, idealistic young Chinese banded together to jolt the nation’s conscience. Today, their heirs face erasure. [Source]