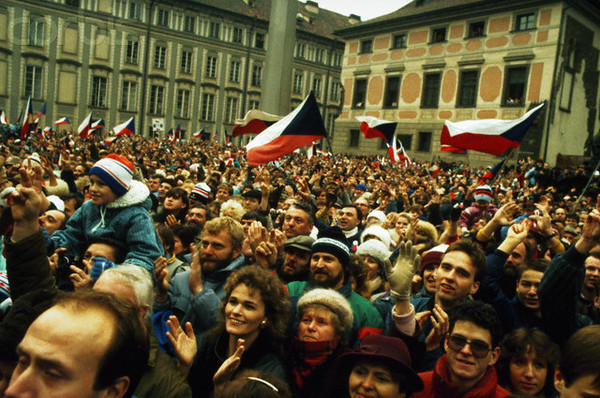 The following was originally published by Project Sinopsis and is reposted here with permission:

Between Tanks and Knitting Needles: 1989 and 2019 in Prague and Beijing

The annus mirabilis of 1989 witnessed a worldwide crisis of Leninist Party-State systems. The decades-long iron grip of ruling Communist Parties on political power was challenged from East Germany to China by their own citizens with massive demonstrations and protests.

In Prague, the year started with violent confrontations with the Communist riot police during the “Palach Week” in January. The peaceful demonstrations, commemorating the 20th anniversary of the 1969 self-immolation of Jan Palach in protest against the Soviet invasion a year earlier, were suppressed with senseless brutality. It didn’t bode well for the coming year and the resolution of the growing tensions.

In June, I went to Poland at the invitation of a small group of young intellectuals offering an opportunity to citizens of other Communist countries in Eastern Europe to observe the aftermath of the first (semi-)free elections in the Soviet bloc, held on June 4, 1989. The Polish round-table talks between the Communist government and the citizen opposition around the Solidarity labor union movement that had led to the open elections was one way to deal with the social schism. But there were others, too. On the very same day, June 4, the Communist regime in China opted for a different solution – they sent in the tanks and opened fire on their own unarmed citizens, killing hundreds, possibly thousands.

In Poland, the sheer contrast between the two approaches led to a collective shock, and demonstrated the risk that the country had been able to avoid by choosing negotiations over force. There was an outpouring of sympathy for the victims and outrage against the perpetrators. In Warsaw, the events in China were discussed almost daily, literally on street corners.

Back in Prague, there was thundering silence. The Communist regime was still firmly in control. During the summer, we discussed with friends in pubs and coffee shops the odds of the Czechoslovak Communists opting for one of the two obvious solutions. When push comes to shove, would they choose to negotiate, or to start shooting? Ultimately, as we know in retrospect, they opted at the year’s end to negotiate their way out. After the Fall of the Wall, it became clear that this time their comrades in Moscow wouldn’t send the Red Army as they had done 20 years earlier. Sending in their own tanks would have been too risky. But in the summer of 1989, it was too early to tell.

The precipice of bloodshed manifested itself to me with stark clarity in September when I was summoned to interpret for a Chinese delegation at the Slovak Ministry of Education in Bratislava, where I was teaching at that time after getting myself fired from Charles University in Prague in late 1986. During the otherwise utterly hollow talks, the topic of Tiananmen finally came up. The Chinese delegation lowered their eyes, but their Slovak counterparts offered their sympathy: “In the end, we may have to do the same thing here,” opined the highest-ranking comrade on our side of the table. Then he gave me a stern look: “I hope, young man, that you’re translating accurately.” I have been avoiding interpreting ever since.

When the regime didn’t do the same thing after the fateful demonstration on November 17, 1989, we were all relieved and ecstatic. In our perhaps a bit too premature euphoria, we thought we had left all power-hungry comrades, local or Chinese, behind on the wrong side of History. Within a few weeks, on December 4, a demonstration was held to mark the half-anniversary of an event that could not be mentioned in June. There was a clear understanding of the close, and ominous, link between the Velvet Revolution in Prague and the Tiananmen slaughter in Beijing.

Thirty years later, this understanding still holds, but not for everyone. Tellingly, the Czech government chose this year of symbolic significance to both China and the Czech Republic to commemorate not Tiananmen, but rather the 70th anniversary of the establishment of diplomatic relations in 1949 between Communist China and Communist Czechoslovakia. The Czech President, who among other things still keeps the disappeared Chairman of the disgraced Chinese company CEFC as his “advisor,” appears more interested in advocating the interests of Chinese companies like Huawei or CITIC, than those of his own nation.

Most of the prominent proponents of the recent realignment with the PRC are, like the president himself, former members of the Communist Party of Czechoslovakia that we believed had marched off to the dustbin of history through a negotiated settlement in 1989. After three decades, we begin to understand that they may have negotiated for themselves a better package than we thought.

One member of this entourage is a certain comrade Ondráček, a proud member of the China caucus in the Czech Parliament. As a young policeman in 1989, he took part in suppressing peaceful demonstrators during the “Palach week” of protest. He explained at that time on the state-controlled TV that the aggressive demonstrators he was facing off in full riot gear were armed with hidden weapons, “such as knitting needles.”

I imagine that among the many bystanders the riot police had restrained there may indeed have been an old lady with a knitting needle in her purse. After thirty years it dawns on me that this could really be our only weapon against the old comrades who won’t take no for an answer.  They send in the tanks if they can, or, if they can’t, abuse the democratic channels they had fought so bravely against to find their way back in through the sewers after they had been kicked out the front door.

Sinopsis is publishing this article as part of a series on the 30th anniversary of the Tian’anmen massacre.