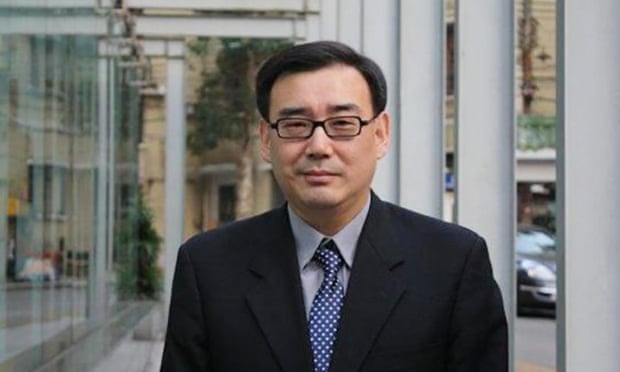 His charges were announced by the Australian government. Yang’s Melbourne-based lawyer, Rob Stary, said few details had been released about the case beyond the spying charges.

“We don’t know whether he’s accused of spying on behalf of a third party actor — a foreign government such as Australia or the US,” Stary said. “We know him as a blogger and democracy activist — so we can’t conceive of any other actions outside of his role as a political agitator.”

Stary said the spying charges were worrying. Espionage can carry the death penalty in China, though Stary said it was “not within our contemplation that this case will attract that penalty.

[…] He was detained in the city of Guangzhou in January, while he and his wife were visiting from New York, where Yang was a visiting scholar at Columbia University. Yang’s wife, Yuan Xiaoliang — a Chinese citizen with Australian permanent residency — has been issued an exit ban preventing her from leaving China, Stary said.

Yang, a former employee at China’s Ministry of Foreign Affairs who became an Australian citizen in the early 2000s and now writes English spy novels, was held under “residential surveillance at a designated location,” a type of secret detention that allows authorities to hold someone for up to six months without access to a lawyer or family contact. He was reportedly moved to a Beijing detention center last month, ahead of his official arrest.

An update from CNN’s Watson and Jiang relays comments from Australia’s prime minister denying that Yang is a spy:

Morrison pledged to “stand up” for Yang Hengjun who was arrested on espionage charges in Beijing, seven months after being detained in southern China.

“These suggestions that he’s acted as a spy for Australia are absolutely untrue and we’ll be protecting and seeking to support our citizen, as we have been doing now for some period of time,” Morrison told CNN affiliate Nine Network’s Today program.

“We make no apologies for standing up for one of our citizens,” added Morrison.

[…] Marise Payne, Australia’s minister for foreign affairs, said in a statement that Canberra was “very concerned” about Yang, who was moved to a detention center in Beijing in July, after six months of house arrest. [Source]

The Associated Press reports on Yang urging Canberra to apply diplomatic pressure towards his release and his expression of thanks to the Australian PM, and also relays a response to the PM’s comments from China’s foreign ministry:

Yang Hengjun said in a statement released by a Sydney-based friend on Thursday that he was “extremely grateful” to Prime Minister Scott Morrison, Foreign Minister Marise Payne, other Australian lawmakers and diplomats “for their help.”

“I implore the prime minister to help me go home as soon as possible,” Yang, 54, said in the statement provided to The Associated Press by Feng Chongyi, an academic who was detained in China for two weeks in 2017 while researching human rights lawyers.

The Committee to Protect Journalists has called for the immediate release of Yang Hengjun:

Chinese authorities should immediately release Yang Hengjun and drop all charges against him, the Committee to Protect Journalists said today.

[…] “Chinese authorities seem to have a basic confusion that writing about espionage is the same thing as practicing it,” said Steven Butler, CPJ’s Asia program coordinator, in Washington, D.C. “Yang Hengjun should be freed immediately and allowed to pursue his work as a commentator.”

[…] In 2011, CPJ reported that Yang disappeared in Guangzhou for several days and was suspected of having been detained by police. Yang later called that disappearance a “misunderstanding,” according to The Sydney Morning Herald.

At least 47 journalists were imprisoned in China for their work as of December 2, 2018, according to CPJ’s annual prison census, making it the second largest jailer of journalists worldwide, after Turkey. [Source]

On Twitter, Peter Dahlin, a Swedish legal aid activist who was detained in China in 2016 and deported after being forced to confess on state television, offers a thread describing his experience in “residential surveillance at a designated location” (RSDL) while being investigated for “espionage” in China:

A thread on what it’s like to be investigated for ‘Espionage’ in China, especially while in #RSDL. A good indication on what #YangHengjun but also #MichaelKovrig and #MichaelSpavor has gone through, and the steps police and MSS will take to get what they want.

(1) In an almost ludicrous display of incompetence, the MSS was convinced I was a spy for the EU. They seemed unware the EU is not a country and has no espionage service in the traditional sense.

(2) A coworker of mine who found it equally stupid refused to call me a spy, so they took him to a suicide-padded toilet above my cell, and beat the shit out of him. Twice. After that, he confessed. Voila, I was a spy.

(3) Having no evidence, and needing no evidence, confessions was, and is always, the only thing needed in China. Just look at court cases, any of them, and realize forensic evidence barely exist in the Chinese judicial system.

(4) To get more, they decided to go after my girlfriend (also kept in RSDL). It stated with showing her fake receipts, supposedly showing that I was paying my ex-girlfriend to be my secret lover. It failed, so moved on to:

(5) Producing random photos of white kids, saying they were found in my wallet, and that these were my secret kids with other family/families outside China. They actually made fake photos of random white kids for this (!)

(6) When it all failed they gave up on the Espionage idea, and used another national security crime. But, since they decided to deport me instead, they still manage to do so by using the Espionage Law, even though I was never formally charged with any espionage crime.

(7) Since then they continue to use me as a poster boy for dangerous foreign spies, including a countrywide campaign this spring with posters in parks and public places about me.

8) As a foreigner, being accused of Espionage is as go-to solution as accusing Chinese dissidents of using prostitutes or NGO workers of corruption. They will always say that, no matter what the truth is. #YangHengjun #MichaelKovrig #MichaelSpavor

The accusation of visiting a prostitute was leveled at a British consular worker based in Hong Kong this week in a case widely viewed as retaliation for the UK government’s public comments on the ongoing protest movement there. For an in-depth analysis of Yang’s arrest in the context of recently developing diplomatic tensions between Beijing and Canberra, see a roundup from The Conversation. See also The Conversation’s analysis of Yang’s “grim” legal prospects in China.