On October 29th, the Shuangqiao branch office of Chengde City Public Security Bureau in Hebei Province released a “police announcement” on Weibo. The notice said that the bureau “cracked” a case involving a 15-year-old student who viewed information that was “anti-China” and “antagonistic towards China.” The boy was severely reprimanded by the police and authorities from his school. 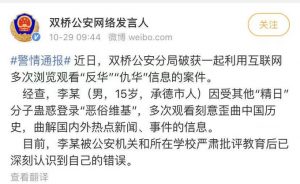 Police Announcement: Recently, the Shuangqiao Public Security Bureau cracked a case in which the internet was used to browse information that was “anti-China” and “antagonistic towards China.”

According to investigation, Li (male, 15 years old, a resident of Chengde City) was tempted by other “individuals who identify spiritually with the Japanese” to access “vulgar Wiki” and repeatedly browsed information that deliberately distort Chinese history and misinterpret trending news and events at home and abroad.

At present, Li is deeply aware of his mistakes after being seriously criticized by public security organs and his school.

Following the release of the news, a large number of netizens were dissatisfied and left many comments below the Weibo post. The Shuangqiao Public Security Internet Spokesperson has now deleted the post.

The following is a collection of netizen comments curated by China Digital Times. Many of the comments reference Li Yi Bar (also known as Di Bar 帝吧), a subforum on Baidu Tieba that is known for organizing members to flood overseas sites they deem as anti-China with spam comments:

@Hong******liang：I report the following to my public security comrades: There is a reactionary organization called Li Yi Bar on the internet. Every year, it commits organized crimes, circumvents the Firewall to access Twitter and other overseas reactionary websites, views information from various hostile forces outside the country that seek to distort and disfigure China. The organization also frequently interacts with these groups. Please ban this lot as soon as possible, bring its key members to justice, and criticize and educate those who are tempted by them.

@Man******le：Police comrade, I want to surrender. I am having thoughts again today that are telling me to view evil capitalist websites.

@Da******9：Police comrade, can you please tell me what kind of information belongs to the category of “anti-China” and “antagonistic towards China”? This is to help ensure that I avoid them at all cost when I go online. In addition, what other content do you not allow us to see? I want to know so that I can shut my ears the next time I encounter this type of information.

@M******9：Uncle police, last time when those people from Li Yi Bar invaded Facebook, most of what they saw were anti-China content. It’s not nice for you to do this. Is it not okay to merely view the content? The more of those content that I see, the more patriotic I become. The guy simply looked and didn’t say anything harmful, and yet you punished him. This is illegal and unreasonable. There is still a long way to go to build up rule of law in China.

@v******2：Can those who circumvent the Firewall to launch attacks on anti-China forces, such as the Li Yi Bar group and those fangirls who are praised for their actions, be considered to have browsed anti-China content? ?

@Qian******8：Deleted? Shouldn’t you go to that school and apologize to that child, and admit that you are recklessly enforcing the law and causing chaos!

@Wu******chen：The fangirls who are out there flooding the anti-China websites, do their actions count as browsing anti-China content?

@S******l：Come and arrest me. I have viewed anti-China content today. It was a Weibo post published by the @Shuangqiao Public Security Internet Spokesperson at 9.44 in the morning. That Weibo post created strong anti-China sentiment in me. Please punish me!

@f******n：15-year-old minor getting arrested for browsing the Internet to view “anti-China” content. Not only are we not allowed to write, we are also not allowed to see. There has not been such tyranny throughout history and all of the lands.

@K******G：There are many countries that make “spreading” certain content punishable by law, but there are not many that make it illegal to “view” such content. Also, what is “vulgar wiki”? I really want the Shuangqiao Public Security to provide evidence and explain what kind of state is “vulgar” and what is “deliberately distorted.”