With U.S.-Iran tensions high following the Trump administration’s January 3 assassination of Iranian Major General Qassim Suleimani, and retaliatory Iranian missile strikes against U.S. military bases in Iraq on January 7, some domestic Chinese online news media faced criticism for spreading misleading rumors about the situation. A January 7 article published on Sohu News (and since deleted), with the byline “FeixiangMeishiJie” (飞翔美食街, literally “Soaring Over Gourmet Street”) suggested that war may be imminent. CDT has translated the relevant paragraphs from the article. Full Chinese text of the article has been archived at CDT Chinese.

US Begs 16 Countries to Intercede with Iran, Prevent War; Iran: “There’s Nothing to Discuss!”

According to a January 5 report by the Tehran Daily, while the Pentagon claims it is rushing thousands of American troops to the Middle East to counter retaliatory action by Iran, and despite the White House’s announcement that if provoked it will launch a massive air strike on 52 key Iranian targets and make Iran “suffer,” Iranian military officials state that the U.S. has in fact withdrawn from Iran’s border regions in order to avert all-out war between the two countries. At the same time, the U.S. has pleaded with 16 other countries to mediate on its behalf and prevent the outbreak of war by all means possible. But Iran says “there’s nothing to discuss” and that they must take definitive action against the U.S.

[…] Jahroumi [Zhanuli 扎努里], the chair of Iran’s National Security and Foreign Policy Committee said that no American will be safe in the Middle East after Soleimani’s assassination, which he said violated international law and military law and constitutes a true act of terrorism. He added that the US should wait for Iran’s “sword of revenge,” and that Iran has the right to take full retaliatory action. As for the latest round of America’s outlandish threats, Iranian generals remain unfazed and stress that the US would not dare to fully confront Iran. They say that hundreds of thousands of soldiers are right now awaiting the command from the Grand Ayatollah Khamenei to make the US regret its foolish decision to murder Soleimani. [Chinese]

The quote attributed to the chair of Iran’s National Security and Foreign Policy Committee is unsourced, and may have been fabricated for the article

Some netizens recognized the coverage as part of a pattern of Chinese propaganda reactions to international news. CDT Chinese has archived a few netizen responses to the Sohu article, which are translated below: 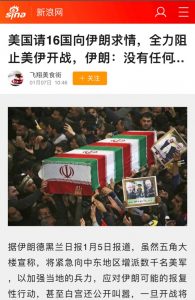 @E******71：While the media behind the Great Firewall broadcasts this clickbait, there’s irrefutable evidence that Iran shot down a passenger plane. The “wall media” should open their coverage with “according to the American media.” No need to read the comments, you know it’ll just be all “you can’t trust the American media” and “the U.S. staged the whole thing.”

@TuC******ws: I would have beaten them up a long time ago if you weren’t blocking me.

@wh******rld: Add one more sentence: “Regretting his actions, Trump is hiding in the air-raid shelter and not daring to come out.”

@MA******lOg5: The CCP is again whistling at night, trying to give itself courage! 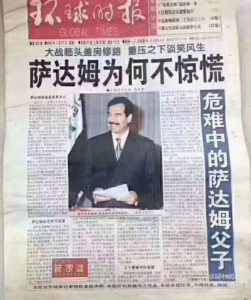 Headline: “As War Looms, He Builds a House; Maintaining Grace Under Pressure: Why Saddam Is Not Scared”

For more on how the Iran-U.S. standoff relates to China, see Didi Kirsten Tatlow’s survey of Beijing’s multitudinous relations in the region at DGAP Online Commentary, “Trump’s Gift to China” by Minxin Pei at Project Syndicate, or “Trump Administration’s Actions in Middle East Complicate Its Criticisms of China” by Edward Wong at The New York Times.