On WeChat earlier this month, user @FeichaiQingnian (“Feichai Youth”) posted an essay on their initial reaction to a post by the official Weibo account of the Xi’an Metro—and their feelings after learning that the post was carefully staged. The author of the essay explains how this increasing use of fabricated narrative to encourage favorable public opinion of the Party and government—a practice highly encouraged under Xi Jinping’s ongoing drive for “positive energy”—is distorting reality, and highly prone to backfiring:

Here, there are people who carry a magnifying glass through life and work, always searching for “positive energy.” It’s like they couldn’t live one minute longer without their fix. I file this morbid mentality under “positive energy Herrmann syndrome.”

Yesterday was September 18, the Day of National Humiliation. But, it was a post on the Xi’an Metro’s official Weibo account that moved me to tears!

Recently at the Zhonglou station on (Xi’an) Metro Line 2, a female passenger walking on her tiptoes caught the attention of a subway worker. He approached her and learned that her new shoes were wearing out her feet. Right away, he brought over a first aid kit. He dealt simply with her wounds and gave her some band-aids. The woman thanked him for his attentiveness.

A female passenger walking on her tiptoes clearly has something going on with her feet. Before she could ask, the worker came to her aid, thus displaying the attentiveness of the Xi’an Metro staff. They aren’t just attentive, they also take initiative. They eagerly came to ask what was the matter, and learned that the woman’s new shoes were wearing her feet out. Then they brought over the first aid kit before she could demurely ask for help…

I thought the woman would put the band-aids on herself and be done with it! But no, people! First the Xi’an Metro worker dealt simply with her wounds, then gave her some band-aids. They didn’t explain what they meant by “dealing simply with her wounds” (disinfecting with rubbing alcohol, removing the dead skin, massaging her feet, applying medicine and bandaging them?), but his “warmth” alone is enough to move you.

In fact, the separation of a screen and hundreds of miles couldn’t stop me from crying uncontrollably over @Xi’anMetro’s post. This instant picture of positive energy kept me going all morning: Xi’an really is a friendly city, the kind of place where you want to just get on the subway and never stop riding…

When I woke up this morning I had tons of messages from friends asking if this is me. Yes, it is…

But I want to explain what happened. Two days ago I scraped the skin on my feet because of something I was doing at work. Yesterday I put on a band-aid, but the friction from my shoes made it curl and stick to my wound… I left so early yesterday that the pharmacies hadn’t opened yet, so I kept on going to the subway and saw they had a care station there. I briefly explained my situation and asked if they had a band-aid. I spoke to three different workers… Finally, a male worker asked me to wait a moment for him to get it from the work room. I waited for more than ten minutes. Then he came back with his camera, and his boss, who was carrying the first aid kit… The boss started asking me questions, then slowly squatted down, opened the kit, and took out a band-aid. I told them over and over that I just needed one. He put two in my hand, then four, until he’d found the right pose for the camera, then finally gave them to me. I thanked him and went to work!

As a public media organization, Xi’an Metro did not report what really happened!

I am grateful to the worker for giving me band-aids, but with this kind of false reporting and poor service, I think that if I or my friends need help, they shouldn’t ask the Xi’an Metro!

Evidently, all that positive energy from @Xi’anMetro scared her, and she deconstructed the “kind help” she received from the subway worker. With the truth of negative energy, she stripped away @Xi’anMetro’s cute little positive energy undies, turning their face red like the flush of spring…

Embarrassed, Xi’an Metro took down its positive energy post. Then, as if nothing had happened, they went right back to looking for the #bestofXi’an. Back to telling stories of positive energy. 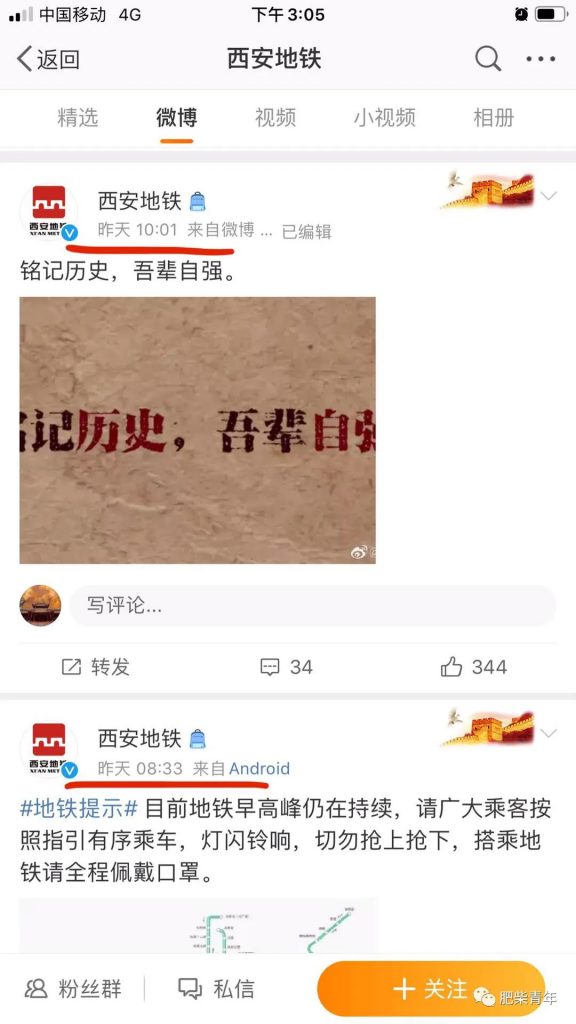 If our lives are flooded with empty, embellished, or simply fabricated stories of positive energy, then “positive energy” may become a term of derision, just like “miss and principal.”

I want to point out that @Xi’anMetro has 590,000 followers. It counts as a “Big V.” It is more influential than a mid-sized newspaper. Whether it’s a serious official channel or a Big V, the news you broadcast ought to seek the truth from facts. You should neither inflate nor diminish. You should insist on the truth.

While @Xi’anMetro’s positive energy story of Little Miss Passenger postures at reality, it clearly exaggerates the basic facts. Going so far as dressing up sub-par service, you catch the whiff of lies. Such empty gestures, fabrications, posturing, and repackaging is in fact naked negative energy!

@Xi’anMetro, you owe us all an apology! [Chinese]