How have China’s nationalists come to dominate the public sphere? In part by browbeating their opponents into silence. Recent examples abound.  A nationalist onslaught shuttered the popular science channel Paperclip. Global Times’ editor-in-chief Hu Xijin, long a doyen of China’s online nationalist sphere, was nearly hoisted by his own petard after nationalists targeted him for arguing that Chinese people should express sympathy, not glee, over coronavirus victims in India. There are darker examples too. CDT recently translated an essay that examined two families shattered by anti-Japanese protests in 2012. In the essay translated below, Zhihu user Seasee Youl demonstrated how nationalist rage leads to silence in their response to the question “Why do you speak less and less?”:

I saw the funniest thing this morning. After breakfast, I bumped into my nephew. He made a fuss about going to the ball pit at the mall, so I brought him to the one nearby. Upon stepping through the doors I saw an old man arguing with the attendant, his voice ringing sharp and clear: “You all are traitors. I’m calling to have you shut down right now!”

On the brink of tears, the attendant exclaimed, “What do you mean, traitors? Could you please not yell here? Why don’t we go to the office to discuss this?”

As the crowd around them grew, the old man raised his volume and pointed at the ball pit, where children were playing. “Everybody come look. Right now America and China are fighting a trade war. Oh, how those Americans despise us, and yet here you’ve put up the American flag. If this isn’t treason, then what is? You don’t deserve to be called Chinese…”

“This place was built years ago,” the attendant said. “I’m only in charge of keeping the children safe.”

“This horse-shit playground should be closed. Doesn’t everyone agree?”

The crowd jeered their agreement, and the attendant found herself the object of their spite. Grimacing, she wiped her tears and tried to explain, but nobody would listen. A couple of opportunists who noticed the commotion called their kids out of the ball pit and demanded their money back. I couldn’t stand to watch any longer, so I squeezed through and told the old man, “Sir, you’re already up there in age. Why are you making life so hard on this young woman? Your patriotism is admirable, but you don’t have the right to randomly accuse people of being traitors.”

Then he leveled his spear at me. “And you, you’re spineless, too. In the war years you would have been a collaborator. Can’t you see they’re flying the American flag?”

It took all my effort to suppress my laughter. I wrinkled my brow. “Sir, that’s the British flag. And they aren’t flying it. It’s only printed along the bannister.” 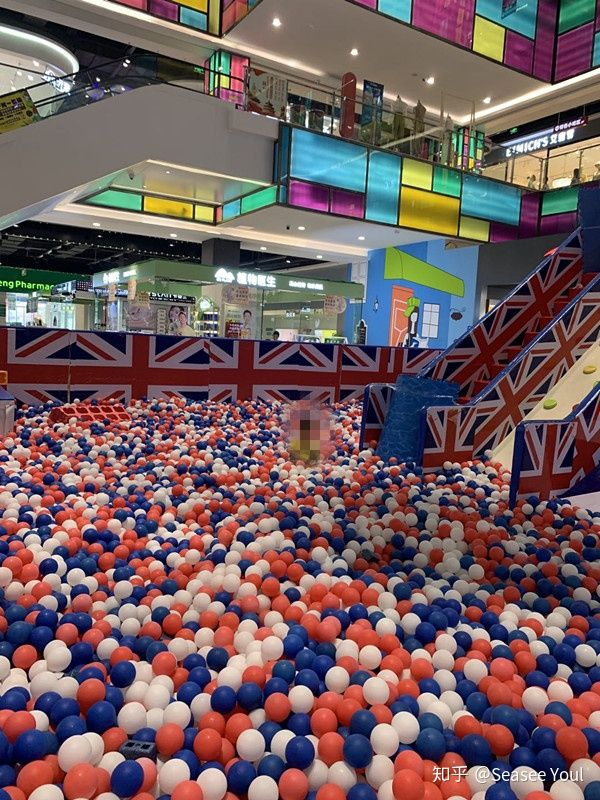 A picture of the ball pit in question.

Everyone fell silent. The madness of the old man and the crowd was nearly incomprehensible. It was as if they were looking to vent their personal grievances, and any old excuse would do. They hadn’t even looked closely at the flag. I figured now that I’d shot him down, the old man would realize he’d been wrong. But, unwilling to lose face, he walked off, muttering, “Not like the English are any good, either. It’s all blind foreigner worship. Spineless…”

After the crowd dispersed, I bought a ticket for my nephew. The attendant thanked me and said the old man had stirred things up on purpose. He wanted his grandson to play for free, but she wouldn’t let him. She said it was mall policy. Then he tried to bargain: he wanted to pay ten yuan for a 20-yuan ticket. When this offer was rejected, he went berserk.

So that’s how it was. That old man’s indignant self-righteousness was such a joke.

I thought back to a party at my coworker’s house last year. He had a projector in the living room. My coworkers knew I watched a lot of movies, so they tasked me with selecting a film. I chose one I thought was pretty good called “The Great Buddha+.” I think the storytelling is novel and deep. About half-way through the movie, out of the blue, my coworker opened fire on me. He turned off the projector and came at me puffed up like a rooster. “Are you out of your mind? Recommending a Leon Dai movie… Don’t you know he’s a Taiwanese separatist?”

“He plays the boss,” he replied. “Or have you got it confused? I can tell you’ve got ‘ideological problems.’ Choosing this sort of movie at a company party… what were you trying to do?”

One of my managers was at the party, and when he heard those words his face sank. My coworker and I have had a long-running conflict, and he had found the perfect opportunity to screw me over. He had thwarted my chance at a promotion by branding me with “ideological problems.” I was fired up. I put my tea down and said, “Come on, man, I just picked a random movie. If you love the country that fucking much, why do you scale the wall every night to watch Japanese and American porn? What are you doing, studying Ah Q’s spiritual victories?”

I kicked him in the stomach and the place went to hell. The next day, my boss called me in for a talk. They said they’d heard what had happened and were going to demote me in order to “protect the company’s image.” My manager was obviously the one who reported me. I was sympathetic to my boss. In the internet era, people with ulterior motives will pounce on anything to score a point. They’d rather ten innocent people suffer than one guilty person escape. Total opportunists.

I requested a leave of absence and looked for a chance to resign.

I remember that when I was in college and everyone was boycotting Japanese goods, a bunch of Japanese cars were vandalized along my street. My cousin was too scared to drive his Toyota. He kept it parked in the garage under his building. He even put a bumper sticker on it that read, “The car is Japanese, but my heart is Chinese. I’m trading it in soon, please show mercy.”

Despite all that, late one night a couple of guys took bricks and metal rods to his car, smashing it up beyond recognition. My cousin heard them and ran downstairs to stop them, but they carried on as if he wasn’t there. He tried to reason with them, but one of them raised his rod and said, “One more step and we’ll beat you up too, you traitorous bitch.”

My cousin knew that guy. He owned a little convenience store outside the apartment complex. Don’t mistake him for a hot-blooded nationalist. He was just a petty merchant sick with jealousy.

As the gang swaggered out of the apartment complex, people heard the shopkeeper laugh, “He drives a 200,000-yuan car. Let’s see if he’s still a big shot after this…”

If I don’t want to pay, I’ll call you a traitor. Everyone will stand by me and curse you as you cry.

If I want to take your job, I’ll say you’ve got “ideological problems.” The boss will support me and all you will be able to do is pack your bags.

If I can’t afford your car, I’ll just use “boycotting Japanese goods” as an excuse to destroy it. You won’t even be able to sue me.

Patriotism is the last refuge of the scoundrel. Ain’t that right.

True patriots give their all to society. They’re gentle and conscientious. They protect their own bottom line and aren’t interested in crime.

Mouthy patriots scream online until they shake the heavens. They spend their days wallowing in mediocrity. What they’re best at is getting online and inciting attacks on anyone they don’t like.

Real patriots work hard and pay their taxes. Even if they’re not particularly talented, they’ll pour themselves into improving society.

Mouthy patriots do nothing of value. When they can steal, they do. Only when they’re riling up the mob do they find some sense of self.

What I can’t understand is why the latter almost always win over the former. This has made me lose hope. Maybe when a small few control the truth, the vast majority choose blind submission.

Over time, I’ve lost the will to resist them, and I don’t care to roll around in the mud with them, either. The only option is getting used to keeping quiet. Resistance has slowly turned into silence… [Chinese]

With contributions from Anne Henochowicz.