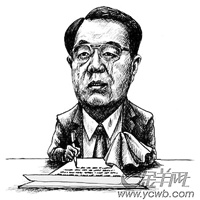 A newspaper in southern China has suspended a cartoonist after he drew a weeping Chinese President Hu Jintao, a Hong Kong newspaper reported on Thursday.

Depicting national leaders in cartoons is considered politically incorrect in China, although it is periodically done without repercussions, the South China Morning Post said.

But artist Kuang Biao’s cartoon of a teary-eyed Hu replying to a letter from the daughter of a university professor who died from overwork aged 48 was regarded by mainland censors as unacceptable, the newspaper said. [Full Text]