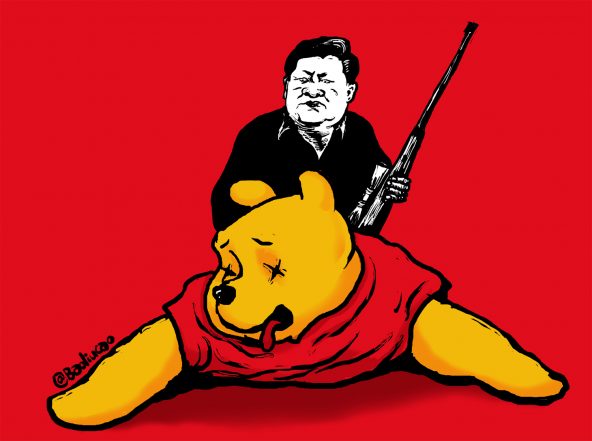 Images of children’s book and cartoon bear Winnie the Pooh have been used to poke fun at China’s president since 2013, when social media users noticed their alleged resemblance during a visit by Xi Jinping to the United States. On Saturday, the meme reared up again, spurred by a Weibo post from Sogou CEO Wang Xiaochuan. This renewed attention prompted widespread though reportedly inconsistent post removals and search blocks, as well as the removal of WeChat’s Pooh Bear stickers in an apparent effort to protect Xi’s carefully groomed public image ahead of a pivotal leadership shift at this autumn’s 19th Party Congress. The censorship, in turn, sparked fresh mockery, in which cartoonists Rebel Pepper and Badiucao eagerly joined: You can support Badiucao by buying "Watching Big Brother: Political Cartoons by Badiucao," available in EPUB and PDF formats. The book covers the early years of Xi’s presidency, from December 2013 to January 2016. No contribution is required, but all donations will go to Badiucao to support his artwork. CDT is also selling merchandise featuring Badiucao’s work in our Zazzle store. See also interviews with the artist by CDT, PRI’s The World and Australian Broadcasting Corporation’s RN. Many of his earlier cartoons are available via CDT.